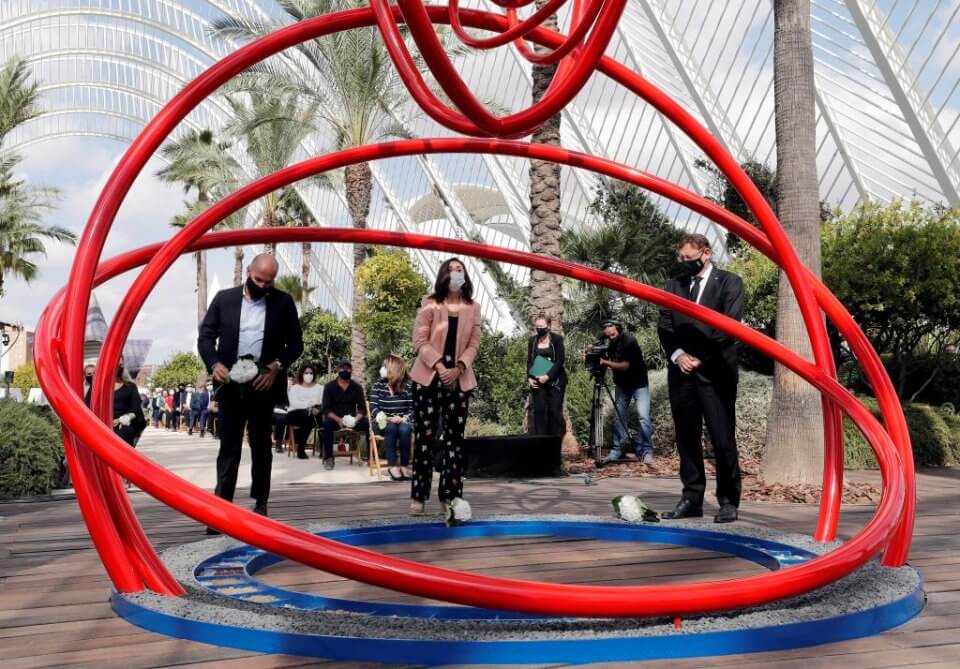 Gatherings of large crowds and processions may have been banned, but that didn’t stop Valencians letting off fireworks to mark El Día de la Comunidad Valenciana on Friday. In fact small mascletás (loud daytime firework displays) and castillos (at night) were held throughout the city in the pedanías (boroughs) on the evening of Thursday 8 October and the morning of Friday. The authorities had asked people to enjoy them from their balconies or roof terraces to avoid large concentrations. Dignitaries in towns across the region, meanwhile, marked the day with socially-distanced ceremonies.

The Valencia regional health minister, Ana Barceló, has qualified the outbreak at Valencia Polytechnic University as the largest in the region since the beginning of the pandemic in March. Speaking on Tuesday she said 712 PCR tests had so far been carried out, of which 168 had come back positive.

All classes at the Vera Campus of the UPV have been changed to online, and all health and science practical classes in all the region’s universities, both public and private, have been suspended from 6-16 October.

The university outbreak is related to an unauthorised Ibizan style party which took place on Saturday 27 September on the roof terrace of the Galileo Galilei student residence. Students were informed late last Sunday evening that the measures were being brought in from Monday morning.

Barceló said: ‘We cannot relax, after the huge effort we’ve made as a society, and if we don’t respect the rules, at some point we’ll have to take decisions we don’t like.’ She also made a plea for the responsibility of everyone to help control the spread of the virus.

The numbers of Coronavirus infections in the Valencia region are still among the lowest in Spain, despite the huge outbreak at Valencia’s Polytechnic University, and show a picture which is pretty similar to last week. There have been 2,780 new infections in the region during the past week (1,000 fewer than last week), 3,410 all-clears and 32 deaths (one more than last week). As of Friday, there were 426 people in hospital, with 74 in intensive care. By province there were 48 in Castellón (eight in ICU), 135 in Alicante (31 in ICU) and 243 in Valencia (35 in ICU).

There have been 127 new outbreaks, 39 of which were work-related, 83 related to socialising and just five related to education, showing that the return to school has not brought a large spike in cases as many had feared. Also, only 25 of the new outbreaks have occurred in Valencia city, less than 20%, compared to August and September when that figure was around half.

Organisers behind a new all-inclusive offer to attract visitors to Benidorm have been inundated with requests since it was launched last week.

Benidorm Resort is offering a week’s accommodation and food for just over €200. The all-inclusive offer is the result of a collaboration between the ABRECA and COBRECA hospitality associations with the Rosenberg Real Estate Agency and Nicaragua Apartments.

There are a variety of offers and guests can choose accommodation with full board, just breakfast or just breakfast and lunch. The meals can be taken at a selection of 25 participating bars and restaurants. There is also a special discount voucher for residents of the Valencia region wanting to visit Benidorm Resort.

Benidorm, which relies heavily on the UK tourism market, has been particularly badly hit by the fallout from the Coronavirus pandemic, and this new approach is an attempt to retain something from the Winter season. The offer runs from 14 October until 31 March.

So far the website is only available in Spanish and the response has been so popular that enquiries cannot be dealt with immediately and organisers have had to ask users to be patient.

Meanwhile tourism organisations from the Valencian region, along with Benidorm City Council, held their VII Annual Tourism Day in the city of skyscrapers. They called on politicians to reduce taxes, provide direct help and not to compete on price.

José Luís Zoreda, executive Vice president of Exceltur, even went as far as to describe the Benidorm resort package of €200 per week as ‘immoral’.

The event was organised by AVE (Valencia Business Association) and following a welcome by AVE president, Vicente Boluda, and a recap of the #Eresturismo (you are tourism) campaign, there was a debate, a talk and two round tables: one about the duality of music and tourism, the other about tourism and entrepreneurship.

There were representatives from Alicante Chamber of Commerce, Valencia Business Confederation, EDEM Business School and the Valencian tourism and hospitality business association HOSBEC, as well as the hosts, Benidorm City Council.

Speaking after the event, Benidorm mayor, Toni Pérez, highlighted the capacity for innovation and resilience with which Benidorm is marking itself out in this situation of crisis. He also expressed his conviction that it would ‘overcome the situation and come out of it stronger, thanks to the entrepreneurial spirit of the region, because we are all key to the reactivation of tourism’.

HOSBEC also announced this week that a further 15 hotels plan to close after the El Pilar holiday, leaving only around 20 of Benidorm’s hotels open.

Valencia and the Basque Country are two autonomous regions where the use of cloth face masks has been banned at hospitals. Anyone wanting to enter a hospital who is wearing one will now be politely offered an approved disposable mask instead.

Due to the variety of masks on offer and the impossibility of knowing which masks are certified for use, the health department have decided to put a blanket ban on cloth.

Speaking to Cadena Ser, she explained that ‘the size of the holes in this type of face mask are much larger than the virus itself so we’re going to inhale it anyway’. She added: ‘If we all wore surgical masks we wouldn’t infect each other … but, if there are people who wear masks that don’t do anything, not only do they infect themselves, they also infect others.’

On Monday, the first day of the flu vaccination campaign, 33,110 flu jabs were given. The health department are trying to reach the most vulnerable groups, including over 65s, health workers and those with certain underlying health problems. Some vulnerable patients are being called by phone to make their appointment and others are being encouraged to get in touch. Appointments can be made online by contacting one’s local health centre, by using the GVA+Salut app or via the Conselleria de Sanidad website.

A new sculpture to remember Covid-19 victims has been unveiled this week at the Umbracle building of the City of Arts and Sciences in Valencia. The sculpture contains soil from each of the 33 counties of the Valencia region and was inaugurated in a ceremony attended by Valencian president Ximo Puig on Thursday.

‘State of Alarm’ imposed on Madrid