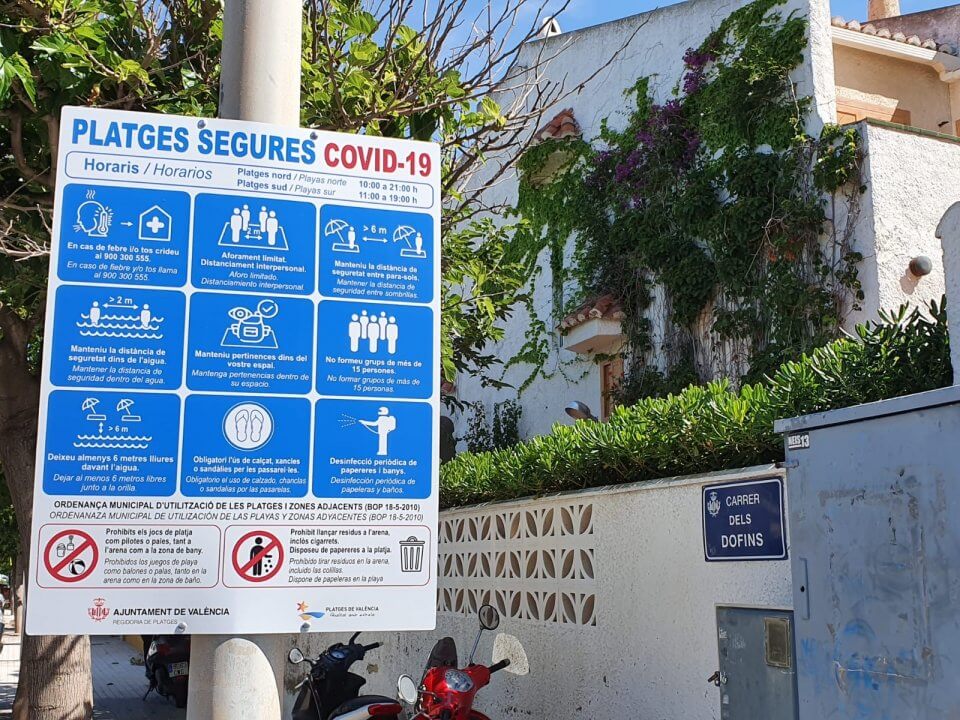 Last Monday the whole Valencia region moved to Phase Two – and after several months of bad news and heart-breaking figures of daily deaths, we had five consecutive days without a single Coronavirus-related death in the region.

Infections also seem to be slowing down, with only 20 new cases recorded on Friday, compared to 79 ‘all clears’.

Valencia health councillor, Ana Barceló, revealed that her department would not be recruiting the 1,200 track and trace health staff which had previously been announced, as there was no longer the need. However, on Thursday she did announce 61 places would be created in Mental Health to help combat the effects of Coronavirus.

On Wednesday, the president of the Valencian government Ximo Puig, along with Barceló, visited the logistics centre at the Feria Valencia where PPE (personal protective equipment) is being stored.

Puig confirmed that the region has enough stockpiles to last for the next six months in the fight against Coronavirus. However, he highlighted the need to maintain ‘prevention’ and ‘prudence’.

This week Puig and Barceló also visited the Global Omnium GoAnalytics site where water samples are analysed for traces of Covid-19.

The analysis of 950 wastewater samples, taken from points across the region over a period of less than a month have shown that the virus is practically non-existent. Samples will continue to be taken as a preventative measure and Puig said he wanted to roll out the system for the whole Valencian region, emphasising how helpful it will be in monitoring for possible resurgences of the virus.

Even amid all the positive news, the Valencian government hasn’t asked for the region to pass to Phase Three on 8 June, as many other parts of the country are doing. Instead we will wait until at least 15 June.

While small shops have been open for a couple of weeks, shopping centres only opened on Monday. In our local shopping centre, El Osito in La Pobla de Vallbona, we had to queue up to have our hands sprayed and be given gloves before entering Carrefour.

Smaller shops each had signage to indicate which way shoppers had to go, maximum numbers of people – and, of course, hand sanitisers at every turn. Shop assistants said there had been a steady flow of customers since they re-opened.

In our town of l’Eliana, people are generally wearing face masks when out and about or shopping, as well as politely waiting outside small shops until they are allowed in.

I’d run out of elastic to make face masks, so one of my first outings was to the haberdashers where I started wandering around, waiting to be served. I was politely asked to wait within a marked square metre in order to maintain social distance from the other customer. Needless to say, they’d sold out of 5mm elastic, except for a few bits in unwanted colours. I opted for a grey-ish pink and a marigold yellow. We’ll certainly have cheery face masks.

Some beaches along the Valencian coast have opened to visitors this week, amid strict rules of social distancing and limits on numbers.

In an attempt to control how many people are on the beach at any one time, Ximo Puig announced this week that the regional government would be hiring 1,000 young people to help.

The idea is that these ‘helpers’ will assist tourists on the beaches and support the police by letting them know if numbers are getting too high.

Puig explained the government wanted to make the beaches a safer place and that while we are all used to going to the beach in a certain way, we’ll now have to change and go ‘with more prudence’.

Cameras have been installed in some beaches, such as Postiguet beach in Alicante, where the local council and Aguas de Alicante are working together to keep an eye on numbers and social distancing.

The cameras will start being used from July. In this video, Mari Carmen Sánchez, deputy mayor and councillor for tourism shows the new installations:

A new app reservaplaya.es is being developed by the concert reservation company Enterticket. It will allow people to reserve a place on a beach in advance, guaranteeing beachgoers a space on the sand while maintaining social distancing and complying with norms of capacity.

Such apps will be unnecessary where beaches are long and wide but for urban beaches, like Valencia city’s Las Arenas and Malvarrosa beaches, or the beach at Canet d’en Berenguer they will be essential.

Community swimming pools have reopened but with signs to remind users of hygiene rules and showing clearly the maximum capacity allowed. Sunbathing areas are also being clearly marked .

The popular festival of the Eve of Saint John’s Day, famous in the Valencia region for beach bonfires on the night of 23 June, has become a point of contention amid the Coronavirus crisis.

The night before San Juan (24 June) is when people congregate on beaches up and down the coast in a celebration which for many truly marks the beginning of summer. The bonfires are said to purify and protect, warding off evil spirits.

However, on Wednesday there were hints among the council in Alicante that the fires would not go ahead. Mari Carmen Sánchez argued against allowing them as they would go against all the measures being brought in, as well as the work being done to guarantee social distancing and safety, knowing the large concentrations of people that they attract.

Then on Thursday, the Valencian government said they would be setting out guidelines for how the celebrations should go ahead, given the current Covid-19 situation.

On Friday, however, deputy mayor of Valencia, Sergi Campello said the city would not be allowing the celebrations to go ahead due to the huge numbers of people that usually gather on the city’s beaches. He didn’t, however, give any details of how that would be enforced and whether or not the beaches would be cleared of people.

After so many months at home, both parents and little ones are probably ready for a break. Although schools won’t be resuming again until September, summer schools are being allowed to go ahead, with the necessary Covid-19 restrictions.

For instance, there can only be a maximum of 10 students per monitor, classes should be outside or in very well-ventilated rooms, face masks should be worn if social distancing is not possible – and food should be served to children rather than collected by them, if possible.

Just want to let you know how much we appreciate Valencia in English. It’s a great resource for us to keep informed about the city and province. We are looking forward to moving there once it’s safe to do so. I hope that you will report on when the airlines will resume flights from the US and Panama (where we are currently) to Spain. Thank you!

Hi Kim,
I’m pleased it’s useful to you. I hope you eventually make it to Valencia. Let us know how you get on.
Catherine

Hi – thank you for all your information. I have only just come across your website and I noted, as regards face masks, that there are exceptions to the rule. I have COPD and Bronquiectasias and I think this would be an ‘exception to the rule’? But can you please advise that if I walk in, say a shop etc where masks should be worn and the people that own the shop said to me that I had to put the mask on – could I show them the Results of Tests that I had at the hospital and then they would be OK for me to walk around that store/shop etc without the mask? At least them seeing the Test Results would prove that I have what I say I have? Also, how would the Police react to this situation? Your advice would be most appreciated. Thank you

Hi Denise,
Yes, I imagine in your case you’d be exempt from wearing a face mask.
In theory the shops should accept your test results but in reality it may depend on the individual.