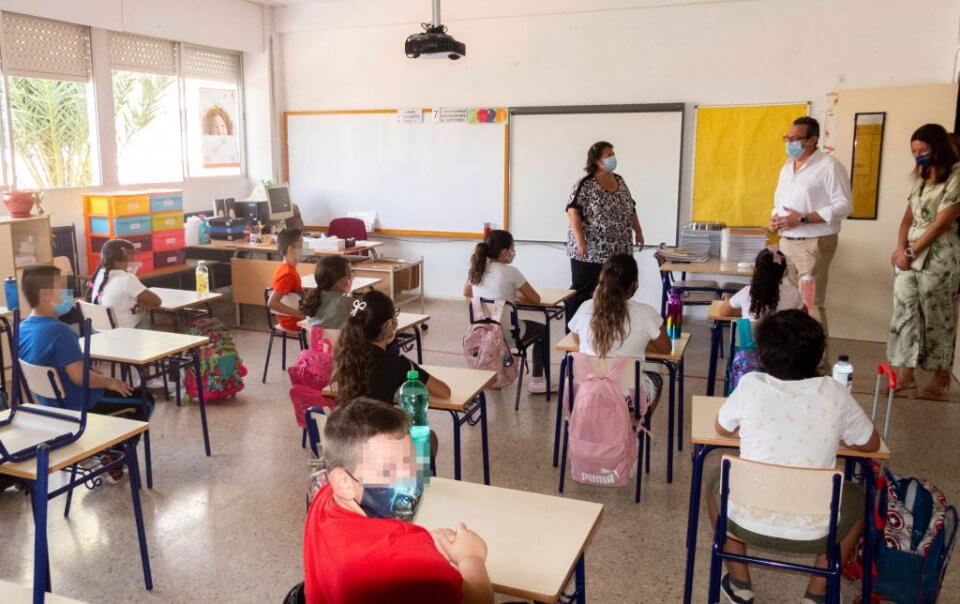 So many things in 2020 have been unusual, and the return to school has been no exception. After military-style planning over the summer, school children from the age of 3 to 18 returned to their classrooms this week following a break of almost six months.

Some had their shoes and hands sanitised before entering, others had their temperatures taken – but all those from first primary upwards came to school wearing a face mask. And once inside schools, fitted with new signage showing one-way systems and markers for social distancing, teachers did their best to make sure pupils wore face masks at all times, maintained social distancing and didn’t share material.

Despite all the measures being taken, by the end of the week several classes across the region had already been sent home to confine because of possible Coronavirus infections.

Some students are lucky enough to have face-to-face classes every day while others, generally those in secondary education will alternate, with half the students attending school Monday, Tuesday and Wednesday one week and Thursday and Friday the following week.

This has triggered the Valencian branch of the CCOO union to call for secondary curriculums to be revised and condensed, describing them as ‘excessively long’, arguing that teachers will not have the chance to cover all the content necessary.

Parents have also been handing in their signed Covid-19 declarations, promising that they will check their children’s health on a daily basis and won’t send them to school if they show any Coronavirus symptoms.

This is likely to mean many more days at home for children, each time they have a runny nose or an upset stomach and consequently days of work lost for parents. If a pupil is found to be Covid-positive they and their family will have to confine at home.

Gonzalo Anaya of the ‘Confederació d’AMPA del Pais Valencià’, (an organisation representing parents’ associations for the Valencian region) has called for full pay for parents forced to stay at home with their children.

The confederation has also praised the efforts made for the return to school. The confederation’s president, Màrius Fullana, said: ‘In this new educational normality, we have to convert worry and fear into prudence, solidarity, positivity, optimism, with much courage and strength to comply with the rules and be jointly responsible at home and at school. Taking care of our children, we will take care of the whole of society.’

The Valencian health department has launched a new phone service for the education community, for general information about Covid-19 and protocols for the return to school. Beginning with 115 operators the service will expand to 200 specially trained health professionals. The lines are manned from 8am to 8pm and in the first four hours it was up and running on Monday, it received 330 calls. The number, which is now available to the general public is 900 300 555.

From next week it will be the turn of university students to return to their classrooms. At the UCV (Valencia Catholic University), all sixth year medical students were being tested for Coronavirus after six students, who were about to start their practical training on Tuesday, tested positive.

The University of Alicante has published its protocols, the main points being the compulsory use of face masks and social distancing of 1.5m and that students are only allowed to attend the campus or other facilities on the days they have face-to-face classes, spending the minimum amount of time there and not loitering in corridors and other communal areas. There are also reductions in numbers in laboratories and reorganisation of lecture theatres

Numbers of positive cases continue to rise but some argue this is due to more testing and contact tracing being carried out. However, and more worryingly, numbers of those in hospital and those dying from the illness are also rising. By Friday, the health department had reported 27 deaths during the week and said there were currently 72 patients in intensive care. Compare this to the figures a month ago, when during the week ending Friday 14 August there were just five deaths and only 24 patients in the ICU.

Breaking down the figures, this week began on Monday with 1,257 all-clears compared and 502 new cases of Coronavirus, since the previous update last Friday. There were, however, seven deaths recorded and 33 new outbreaks.

Tuesday saw a further 672 new cases of Coronavirus, 599 all-clears and two deaths. There were another 33 outbreaks..

On Wednesday there were 743 new cases of Coronavirus, 428 all-clears and five deaths. A further 29 outbreaks, 18 in the city of Valencia.

On Thursday the health department reported 653 new cases in the previous 24 hours, 443 all-clears and four deaths. There were 20 new outbreaks.

On Friday there were a further 960 new cases registered, 885 all-clears and nine deaths. 25 new outbreaks, of which 11 were in the city of Valencia.

Children with asthma are not adversely affected by Covid-19

Valencia’s La Fe hospital has taken part in an international study which has concluded that children with asthma are not a high-risk infection group, and nor are they adversely affected by complications should they contract Covid-19.

The Infant Pneumology and Allergy team also concluded that the use of face masks for paediatric patients with asthma was safe.

The news will come as a relief to many parents, myself included, who have been worried about sending their children back to school with face masks.

Head of La Fe’s Infant Pneumology and Allergy section, Dr Antonio Nieto said: ‘It would not be justified to use asthma, when it is under control, to request exemption from wearing a face mask. Moreover, not using one implies a greater risk of infection (of Coronavirus) for the patient and their classmates.’ The report also found, however, that during an asthma attack the face mask could be a limiting factor.

Representatives of nightlife in the Valencian region (Fotur) have decided to go ahead with legal action against the Valencian health department over their order to close clubs, bars and dance halls back in August. The decision comes as the industry faces a further three-week extension to the ban, which was due to end this week.

Fotur argue that the decision was unfair, unfounded, and has also not stopped the appearance of Coronavirus outbreaks in the region. Fotur president, Victor Pérez, speaking at a general assembly held on Thursday, and attended by around 40 companies from throughout the region, said: ‘They (the health department) are not aware of the economic repercussions that the closure is having on businesses. Companies are going to collapse. The sector is desperate.’

Saving the winter season and calling all digital nomads

In an attempt to salvage the winter season, Benidorm is aiming to develop a travel corridor with the UK, via Alicante-Elche Airport, which would involve UK tourists being tested on arrival and departure, rather than having to quarantine.

Explaining that Benidorm was a safe destination in terms of Covid-19 infections, mayor Toni Pérez pointed out that ‘not a single case has been recorded among international tourists’.

He also said that many ‘British residents and tourists had commented that they felt safer in Benidorm than in the UK.’ Pérez was also critical of the government for prioritising the Canary Islands and Balearic Islands in their negotiations, since July, to the detriment of destinations on the mainland.

Benidorm, your workplace in the Mediterranean

Meanwhile the city of skyscrapers has launched an innovative new campaign to attract digital nomads and new talent, under the slogan ‘Live in Benidorm; work in paradise’. Pérez said, ‘Benidorm offers professional services, safety and perfect connectivity for working from home. It is the perfect place to live and work.’ You can find further details by clicking here.

Valencia, home of paella, prepares for World Paella Day which this year will be celebrated on 20 September.

Tourism secretary for Valencia, Francesc Colomer, took part in the presentation of this year’s virtual event on Thursday, along with other members of the Spanish tourism industry. The World Paella Day Cup, an international competition between eight countries, will also be held on 20 September.