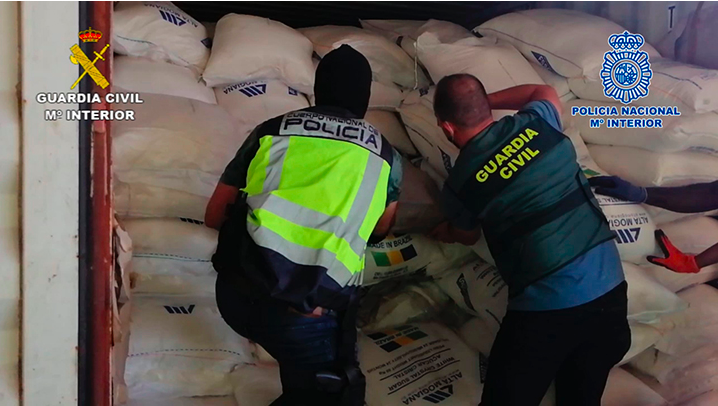 A joint operation between Spanish and US law enforcement agencies led to the seizure of 3,800 kilos of cocaine this week in the Port of Valencia.

Operation Crankbrook Marchica began in April when information was received from different channels of international police co-operation in the USA – the Drug Enforcement Administration (DEA) and Homeland Security Investigations (HSI), the United States Embassy in Spain detailed this week.

The Guardia Civil and the Spanish National Police discovered the drugs, which had come from South America, hidden in six different containers arriving at the port. The narcotic had been hidden in diverse merchandise, including packets of paper, bags of sugar, pineapple pulp and even a helicopter frame.

Apart from the seizure of the drugs, the investigation has led to the dismantling of an international drug trafficking organisation and the arrest of 11 people, mostly Spanish citizens, except for two Dutch nationals and one person from the Ivory Coast.

According to the US Embassy website, the traffickers took advantage of the prevailing situation in Spain under the ‘state of alarm’ to bring large amounts of cocaine into the country for storage and later distribution throughout Europe.

There has been a 400% increase in the demand for bicycles since the beginning of Phase One, according to the Asociación de Marcas y Bicicletas de España (AMBE), which represents 65% of bike sales to small shops in Spain.

What has caused the bike boom? It could be that people’s attitudes towards climate change are changing. It could be to do with the installation of many new cycle routes – or simply that people feel it’s a good way of getting more exercise. It’s also, without doubt, a great way of maintaining social distancing.

Whatever the reasons, the main cities in the Valencian region are now well prepared for us to get around on two wheels, thanks to all the new bike lanes. It’s good exercise, good for the environment and good for your wallet. Plus, there are new government grants for bicycles and scooters which we reported here on 17 May.

100% of the energy used in the Valencia region is to be produced locally by 2030. This is the aim set out this week by the Valencian president, Ximo Puig on a visist to the X-Elio plant at Xixona on Wednesday. The installation will have around 85,000 solar panels, capable of providing energy for more than 25,000 homes.

The company working with the city council, X-Elio, has five solar plants in the Valencian region, providing 820 megawatts (MWp) of clean energy, thus avoiding up to 776,388 tonnes of CO2 emissions per year.

During the visit, Puig said that his aim for 2030 was for 100% of the energy consumed in the region to be produced locally and if that couldn’t be reached, at least 90%.

Puig also said that the regional council would announce a new decree in July to help investment in solar photovoltaic plants in the Valencian region.

He reiterated his calls for a ‘Pacto Verde Valenciano’ (Green Agreement for Valencia) and for the region to participate in a national agreement to reap the benefits of European investment in renewable energies.

After 13 weeks of lockdown Benidorm re-opened its famous beaches this week receiving 5,000 visitors on the first day, and with the new system of plots and staff to welcome visitors up and running

Benidorm Mayor, Toni Pérez, visited the beaches with the Diputacion president Carlos Mazón, who thanked the people of Benidorm ‘for their effort in adapting to the new reality’.

Mazón added, ‘This summer is going to be very different and will mean some changes which are necessary to conform with the safety measures for accessible, safe, blue flag beaches.’

Earlier in the week Pérez was upbeat about the work being done to allow safe use of Benidorm’s beaches with the new online reservation system, where more than 25,000 people would be able to enjoy the sand at any one time.

He explained that during normal high season, capacity reaches more than 40,000 and that to reach 25,000 with social distancing was something ‘unimaginable’. He said they were going to do ‘everything to make Benidorm an exemplary safe beach’.

The beach reservation platform is still a work in progress but a preview can be accessed by clicking here.

Valencia’s Bioparc re-opened its gates to visitors this Thursday for the first time in the ‘New Normality’, with five one-way routes to ensure visitors don’t miss any corner of the park.

Visitors were able to see the animals which have been born in the park this spring, during their very own ‘baby boom’, including the month old baby hippo.

Reservations are made in advance online, to help control capacity and make access more rapid and fluid, and maps of the parc can be downloaded. There are also some special offers on prices. Click here for further details.

As we reach the end of lockdown, this week has also seen the end of school for many, an end of a school year unlike any ever seen before.

An end of year without parties or celebrations, with online ‘graduations’ and with most students passing to the next year.

This end of year will, however, bring a welcome respite to parents who have spent the past 14 weeks helping their children with online classes, doing endless photocopying, constantly trying to reconnect to the Meet or Zoom online class while trying to also ‘work from home’.

As we move out of lockdown today, we’ll now be able to celebrate those ‘special’ dates which were all put on hold.

Those who turned 18 in lockdown and feel deprived of their coming-of-age party – or Golden Wedding anniversaries which went uncelebrated.

This weekend we had one such party for my sister-in-law. Happy 50th, Ana!

Madrid in partial lockdown, with regional government under spotlight

Fines up to €6,000 for travellers to Spain arriving without negative PCR test