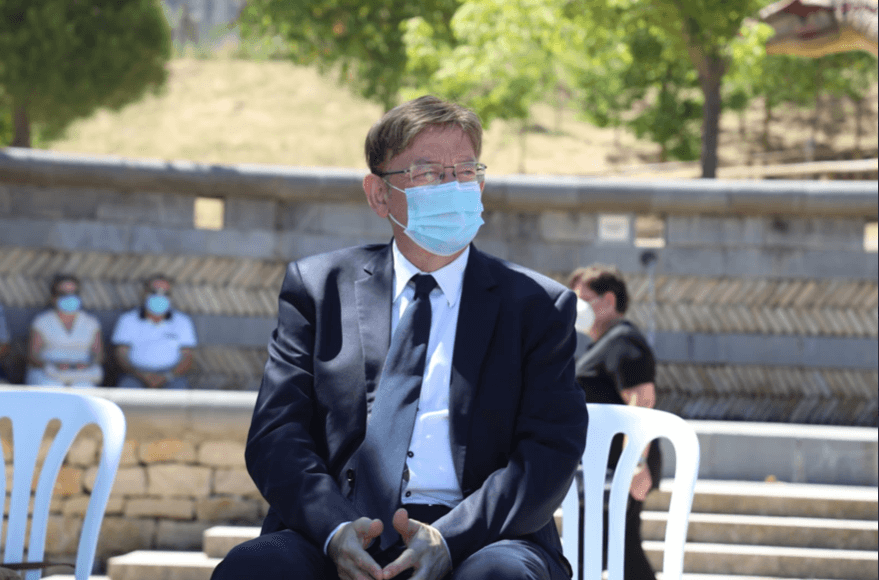 Throughout the week the repercussions of the devastating new UK quarantine restrictions have begun to be felt by both the business sector and holidaymakers alike.

Despite the Valencia region claiming to be a safe destination – something backed up by many tourists already here, and certainly demonstrated by the health regulations in place – many are following the advice of the British Foreign and Commonwealth Office (FCO) and choosing either not to come on holiday to Spain or booking to a different destination.

The consequences are already showing: many bars and hotels along the coast that had planned to open, have not done so – or have been forced to close already. Fears for the economy were confirmed when the National Statistics Institute (INE) recently published the results for April-June this year, showing the Spanish economy had shrunk by 18.5%.

Faced with just a fraction of the normal numbers of tourists this year, companies have joined together in a new campaign – #eresturismo – to promote tourism and demonstrate the effort being made to show that Spain is a safe destination.

With the lack of foreign visitors due to Coronavirus travel restrictions, businesses are trying to look for customers closer to home. AVE (Asociación Valenciana de Empresarios) has said, ‘It is more important than ever to join together in a single message of such importance for each and every town and city of Spain.’

The association has produced a video with testimonials by big names in the world of business reminding people to ‘continue enjoying our beaches, our gastronomy, our culture and our leisure’ while also encouraging us to ‘all support a key sector for our economy’ because ‘tourism is a sector from which the whole Spanish society benefits, directly or indirectly’.

Outbreaks in social and family gatherings cause for concern

Last Monday’s Coronavirus figures for the Valencia region had shown that there had been an increase of 330 new cases during the weekend, with almost half of those cases in the 20-40 age group. This figure also included a worrying new outbreak at a care home in L’Eliana where 12 residents and four staff members had tested positive.

There were five new outbreaks in the city of Valencia itself, of which three were from general socialising, one was work-related and one was from nightlife. There were two further outbreaks in Sueca and Alfàs del Pi, plus a family outbreak in Museros and an outbreak in Mislata related to La Piedra nightclub.

On Tuesday there were 114 new cases and the Valencian government’s health minister, Ana Barceló, announced the recruitment of 85 new track and trace personnel.

Barceló said, ‘The number of new infections has been increasing in the past few days. In fact in the past 14 days it has doubled. This is why we must not be complacent, we must not forget that this invisible enemy of Coronavirus does not distinguish between family, friends, workmates or complete strangers. We must never abandon caution, in any situation.’

She added: ‘Our main concern at the moment is the increase in cases as a consequence of mobility, family gatherings, bar terraces and nightlife because we know they are the origin of a large number of infections over the past few weeks.’

On Wednesday another 114 people tested positive for Coronavirus with two new outbreaks in Elche, both related to family gatherings. Meanwhile the number of positive cases in Gandia (where nightclubs and pubs had been closed) had risen to 158 and most infections were in the 20-40 age group. By contrast, Gandia had one of the lowest infection rates during the state of alarm.

On Thursday there were a further 235 new positive cases with a new outbreak in Chiva. Again Barceló pleaded for people not to let their guard down, especially at private gatherings.

She said, ‘Obviously the increase in positive cases is worrying, but the control measures being used are working and this follow-up of the outbreaks is seeing some 5,000 PCR tests a day, very much aimed at the early detection of cases. Acting in this way means more positive cases are detected and this allows us to track and trace the virus throughout the region.’

However, she reiterated the need to ‘not relax safety and prevention measures within private celebrations’ given that outbreaks related to these sorts of gatherings keep appearing.

Barceló also confirmed that the six separate outbreaks in Valencia earlier in the week were in fact all from the same social focal point – and that there were 54 cases in total, with four of them requiring hospital treatment.

Meanwhile last week’s outbreak at the Mya and Umbracle nightclubs in Valencia has risen to 38 positive cases from the 414 tests so far carried out. That is still only a fraction of the estimated 4,000 people who attended the nightclubs on 23-24 July.

The Valencian health department is hoping people will come forward and are doing what they can to contact those who visited the venues. However, their job is being hampered because although tickets were bought online and emails can be followed up, each customer was able to buy multiple tickets.

With many people still to be contacted, Mya and Umbracle have re-opened for business this weekend, and after being closed for two weeks, Gandia’s bars and nightclubs have also re-opened. To many this is going in the wrong direction, given the current rate of transmission among young people.

Young people wouldn’t agree of course, but on social media the question going round is: ‘What are they waiting for? Close the pubs now!’

Ximo Puig, the president of the Valencian government, attended a memorial service for victims of Covid-19 in Morella on Sunday – one of the areas most affected by the pandemic. It is also the president’s home town. Puig tweeted that, ‘Today, in Morella, [it was] a deeply emotional act. I knew many victims. They remain in our hearts.’

An orange level health alert was issued for 165 towns in the Valencian region this week and temperatures were in the high 30s.

The inland town of Bicorp in the Valencia province recorded a sweltering 42.9º on Saturday. Warnings were given for the south and west of the region, but on Sunday things started to cool down slightly, but let’s not forget, this is August in Spain. It’s hot!

The health department has reminded people to avoid going outside during the hottest part of the day. Likewise, they advise wearing loose-fitting, lightweight clothes in light colours and to protect the head with a hat or cap. At home, to close shutters and blinds and spend time in the coolest rooms.

It’s also important to drink plenty of water even if you don’t feel thirsty, avoid drinking too much alcohol or high-caffeine drinks. Finally they advise replacing large, hot meals with cold dishes, fruit and fresh vegetables.

You can click here to consult temperature maps for the Valencia region – and also on Aemet’s site here.

If there’s one thing sure to spoil my children’s summer holidays, it’s the arrival of the Back to School advertising. But while many of us are enjoying ourselves at the beach, the Valencian education department is busy planning ahead for September and how schools will look under the ‘New Normality’.

The department has said they won’t be testing the region’s 80,000 teachers for Coronavirus, the reason given is that it would give a false sense of security.

The idea was being toyed with but education minister Vicent Marzà said on Tuesday that his department and the health department had decided against it. He said, ‘It could even be counter-productive as it could make you calmer and relax measures.’ He added, ‘It doesn’t make people immune.’

He said the education department had several plans for the return of schools in September, including a €207 million investment plan which includes recruiting 4,374 new teachers. He explained that the current plan is to work in reduced numbers, ‘if the pandemic doesn’t get worse’.

He talked about other possibilities for ‘different scenarios’, although he wouldn’t be drawn on how many other possibilities there were. He did say that €33 million would be invested in digitalisation for students who don’t have technological resources.

He also said that if there was a need for a second confinement, distance learning for all pupils would be guaranteed.

As I sit here writing this, I’m looking out at our communal garden below where there are several groups of teenagers all gathered close together, face masks round their wrists or forgotten all together.

They seem more concerned about the latest TikTok video than catching Coronavirus. Young people, as always, think they’re invincible – but it’s not them that will suffer, it will be their parents and their grandparents ending up in hospital. But with so much access to social media they must be more than aware of the risks that Covid-19 poses to them and their families. So why not think for a moment and wear their face masks?

I want to go downstairs and remind them we’re in the middle of a global pandemic, ask them where their face masks are. But I don’t. They wouldn’t listen to me, a middle-aged guiri.

Perhaps the health department should try a different tack, maybe take a look at how Finland’s youthful prime minster, Sanna Marin, a millennial herself, used ‘Influencers’ to get the message through to young people.

Get your business, services or activity listed on our new Directory!

At Spain in English we have recently launched a new Directory – and you can include details of your business activity or services from the Valencia Region on it for FREE. Or for a nominal annual fee, you can also include photos, a full description – and more. Just follow this link for all details: Get your business activity or services listed on our DIRECTORY – or you can also email everything to: admin@spainenglish.com