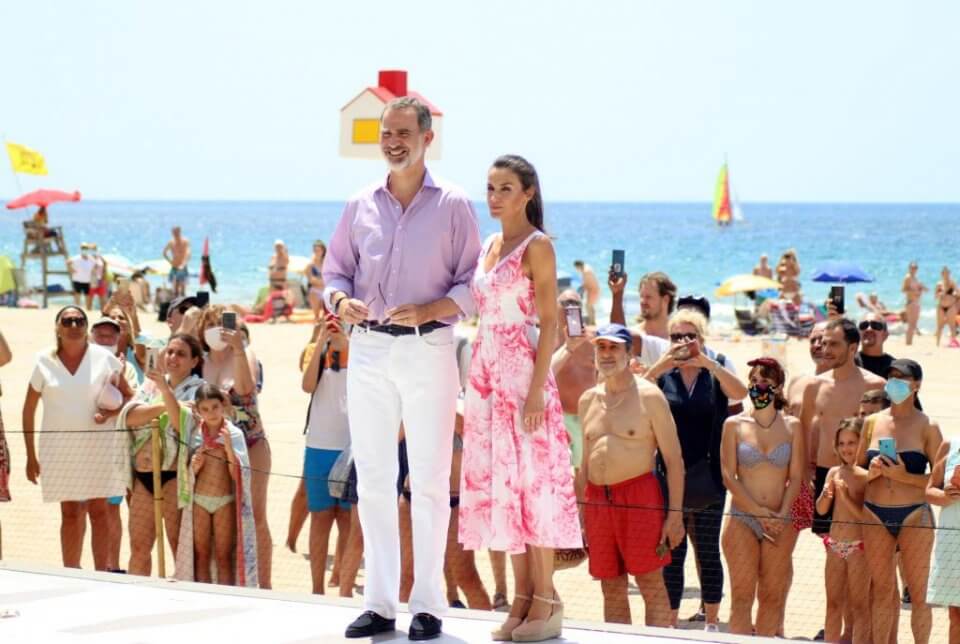 Hundreds of people turned out to see king Felipe VI and Letizia who visited Benidorm on Friday as part of a tour to help promote Spanish tourism.

Following a meeting with the Valencian Business Confederation and trade union representatives, the royals took a brief stroll along the city’s Levante promenade, where they were followed with some shouts of ‘Viven los reyes’.

They stopped three times to greet the crowds that had gathered on the beach, to try an artisan ice cream and to meet local politicians and councillors, including the Valencia president, Ximo Puig.

The couple were greeted by Benidorm mayor, Toni Pérez, who praised the warmth and welcoming spirit of his city.

‘If Benidorm is usually hospitable, with the visit of their majesties it has been even more so,’ said Pérez.

‘Their majesties are a great reference for the Spanish brand, its best ambassadors,’ he added. ‘And as such their presence in the city made this a very joyful, historic day.’

On Monday 16 new cases of Covid-19, believed to be related to a family celebration on San Juan night in Castellón de la Plana, were confirmed by the health department, although none are believed to be in a serious condition. All those involved are isolating and their contacts are being traced.

The health department said that one of the families had come from Lleida and that despite one of its members showing Covid-19 symptoms on 22 June, took part in the celebration.

Meanwhile, 6 of the first 7 positive cases related to the meat factory outbreak in Rafelbuñol (see last week’s report) have now been given the ‘all clear’.

In total 14 people tested positive and the remaining cases are waiting for results of the high performance ELISA blood test which will determine whether they are part of the recent outbreak or previous infections.

On Wednesday 1,000 youngsters began their new jobs as auxiliares de playa (beach helpers) along the coast of the Valencian region.

Aged between 18 and 30, the youngsters’ main tasks will be to check that social distancing is being respected on the beaches, help with the control of access points and capacity, as well as the correct use of marked routes for entering and leaving the beaches.

They will also be tasked with notifying the police about incidents and calling 112 in case of emergency, among other things.

The young people are easily identifiable in their uniform of beige shorts, beige cap and white T-shirt with ‘platges segures’ written on the back, and they will be patrolling the beaches until 7 September.

Valencian president Ximo Puig met some of the Dénia auxiliaries on Wednesday, their first day of work, where he said that the youngsters represented ‘the best face of a Mediterranean that is alive and safe.’

The lucky 1,000 were selected from 22,324 applicants who applied when the job was offered last month.

They will be spread throughout the three provinces of the region with 234 in Castellón, 348 in Valencia and 418 in Alicante.

Towns along the Valencian coast have been hoisting their Qualitur flags this week.

Councillor for Tourism, Francesc Colomer, who visited the Muchavista beach of El Campello on Thursday when their flag was presented, said, ‘The Qualitur flag has a special meaning this year in which we have had to find new energy to fight for the quality and the value of safety.’

Colomer also visited Benidorm to present their flags. Mayor Toni Pérez said that obtaining the award has ‘a fundamental value’, and even more so ‘in the complicated and uncertain times’ that the city has been living through.

Colomer also signed a collaborative agreement with the foundation Visit Benidorm, meaning they will receive €210,000 to boost their activity of promoting Benidorm.

174 beaches across the Valencia Region have received the 2020 Qualitur flag.

Back in January the Valencian coastline was ravaged by Storm Gloria.

One of the most curious outcomes of the bad weather and changed water currents was the story of two fish farms off the Castellón coast that ended up scattered along the beach in El Perelló, some 20km south of Valencia.

Not only did residents wake up to find their beach looking like aliens had landed on it, due to the peculiar large structures that were washed up, but the beaches and nearest roads were covered with dead fish.

Six months later and amateur fishermen in El Perelló are reporting unusually high amounts of dorado (sea bream) and lubina (sea bass), fish that are not normally found there.

It seems not all the fish were washed up on the beaches by Gloria, rather that some have settled and bred in their new home.

How not to make friends and influence people

I am anything but an expert when it comes to football, but living in Valencia and being part of a football mad family, it would be impossible not to know who Peter Lim is and the general feeling towards him among fans. For those less privileged than me, let me enlighten you …

The Singaporean multi-millionaire Lim bought Valencia football club in October 2014 and has since come under fire from loyal, lifetime, grassroots supporters over his management of the club. For instance, firing the manager, ‘Marcelino’ García Toral, at the start of the 2019-2020 season, just months after winning the Copa del Rey against Barça.

Shouts of ‘Lim vete a casa’ (Lim, go home) or perhaps stronger have been heard regularly. (At least in my house and the family WhatsApp group). But Mr Lim appears to be rather thick-skinned and just continues to do as he pleases with ‘his’ club. After all, he lives the other side of the world and rarely comes to Valencia.

This week, however, we heard from his daughter, Kim Lim, who doesn’t appear to have too much respect for the fans who spend a fortune every year on tickets, merchandise and travelling to fixtures.

In response to apparent insults about her family, she posted a message on her Instagram account, stating that ‘the club is ours and we can do anything we want with it’.

The tone was more that of a spoilt child than a grown 28-year-old woman, and, although the post was later removed, it has now been circulated widely and will certainly do nothing to improve relations between the Lim family and Valencia supporters. She didn’t appear to be too sorry, either, as she later posted the single hashtag phrase ‘#dealwithit!’

Quite frankly, if you buy a football club and make unpopular decision after unpopular decision, you’re bound to come up against resistance from the fans – it goes with the territory. Deal with it! Amunt Valencia!