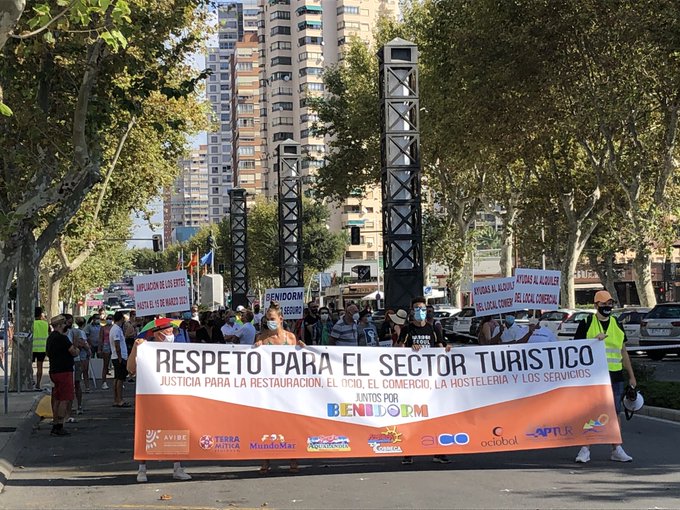 There has been anger, disbelief and heartbreak for those affected by new nightlife restrictions in the main tourist areas of the Valencia region and a backlash from organisations representing them.

The new measures came into force on Tuesday and include a 1am curfew for nightlife venues, as well as a ban on smoking in the street and meeting in groups of more than 10.

Many complain that the blanket ban, which covers the whole of Spain, is unfair, especially in holiday areas, like the Alicante province, where most hospitality venues had been complying with the rules already in place, in an attempt to salvage something from an already disastrous season.

Others, however, believe the stronger rules are necessary to slow the spread of the virus, as people don’t take notice of recommendations. Some even ask for the rules to go further.

Several groups representing the hospitality industry expressed their disagreement with the new measures and said they would be taking legal action against the government, both national and local.

Ramón Mas, president of España de Noche, a national organisation representing clubs, music venues and dance halls, announced that the organisation would be taking legal action against both the central and regional governments.

In an interview on RTVE 24 this week he said that the measures were disproportionate and that the nightlife industry was being ‘criminalised’. He said decisions had been taken without any industry consultation and that no help had been offered to the sector which accounts for 200,000 jobs and 25,000 businesses. He called for a robust rescue plan to protect businesses involved in nightlife.

Mas said: ‘The measures are incredible for a sector that has been closed since March and of which only 40% has opened under brutal restrictions.’ He added that nightlife only accounts for 6% of the new outbreaks of Coronavirus.

Agustín Almodóbar Barceló, member of parliament in Madrid for Alicante and the People’s Party (PP) spokesman for tourism, tweeted his disagreement with the new measures: ‘Disproportionate, it is not right that the whole sector has to pay for the imprudent (actions) of a few. I know many, the majority, who do things right and have adapted their venues and even making large investments. They have my support and this harms many (people).

Victor Pérez, president of Fotur, the federation of leisure, tourism and gambling for the Valencia region, speaking on La Sexta TV, said that he didn’t believe shutting nightlife venues was the solution to stop the pandemic. He said that Coronavirus is with us 24 hours a day, not only at night – and that it is everywhere: the metro, the beach, the church, the supermarket, the village square, not just in nightlife venues. He called for common sense, for people to maintain distances, wash their hands and wear face masks.

Meanwhile the Castellón hospitality association, ASHOCAS, is asking the government to rethink the new measures. Speaking to Castellón Plaza, ASHOCAS president, Álvaro Amores, said that clubs, dance halls and karaoke bars, where activities are carried out in a closed, air-conditioned space, could not be compared to an open-air pub terrace.

He completely opposed the 1am closing time for bars, saying that Covid-19 doesn’t understand timetables. He said that there was a lack of important health information about closing at 1, 2 or 3am, whilst economically it represented a lifeline for the ailing economy of a mortally wounded sector.

He also called for the government to take tough action towards the botellones, something which poses a serious risk to public health, and which are occurring throughout the region on a daily basis in Valencian streets, beaches and town squares.

The action was finally brought by ALROA, the Alicante association representing restaurants and nightlife venues.

However, on Friday the TSJ (Tribunal Supremo de Justicia) in Valencia said that it would uphold the government’s new restrictions, although it said the matter should be investigated to see whether it is lawful. If the court finds in favour of the hospitality industry then the government could be liable to make compensations, although many have said that would be impossible to estimate.

In Benidorm on Sunday a rally was held demanding justice for the hospitality, leisure and retail industries in the city.

Benidorm businesses that rely heavily on British tourists have been hit particularly badly, first by the UK-imposed quarantine and now the new Spanish restrictions brought in this week.

Messages on social media have been heartbreaking, with tales of businesses shutting up and handing the keys back to landlords, while others tell of customers returning drinks vouchers to establishments to support them and their staff.

One supporter has even set up a ‘Benidorm give back’ raffle to be held next Saturday 29 August to help the entertainers who have now been unable to work for three weeks due to live entertainment being prohibited.