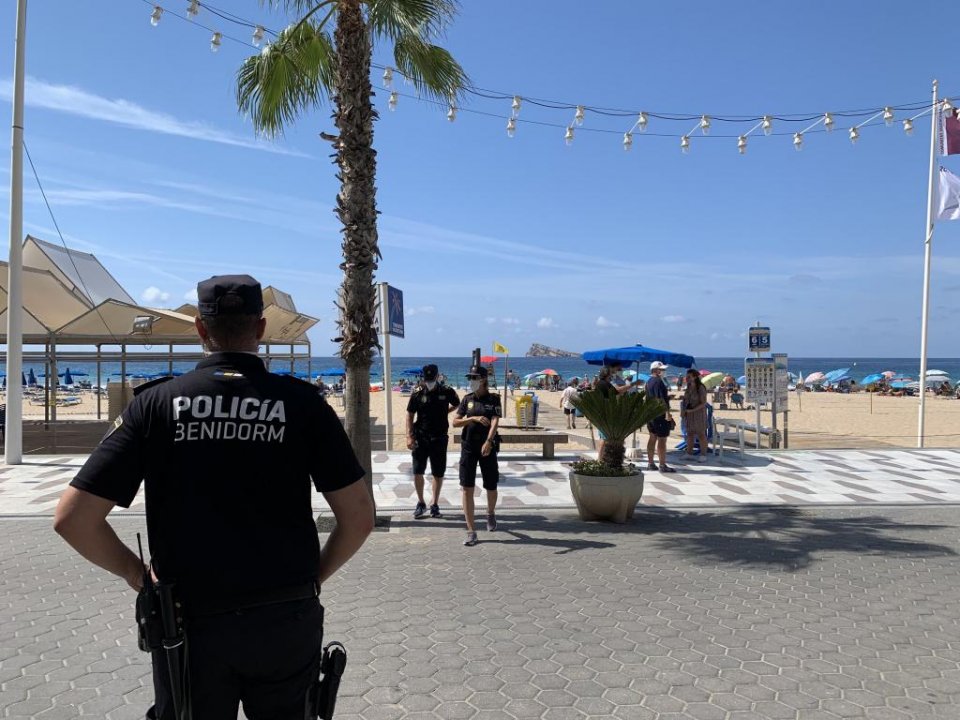 The Valencian regional government has made the wearing of face masks compulsory in all public spaces across the Valencia region, even when 1.5 metres of social distancing can be maintained. The decision follows a week that saw several new outbreaks of Coronavirus (Covid-19) in the region.

Masks will not, however, need to be worn on the beach, at swimming pools, in ‘natural spaces’, while doing exercise, for people with respiratory problems or those aged under six.

The Valencian government health minister, Ana Barcelò, said that, ‘the sacrifice and joint work cannot be forgotten, we have a responsibility to care for others.’

The week began with two new outbreaks in Santa Pola and Borriana, both family infections and both involving four positive cases. By Friday the outbreak in Santa Pola had increased to five.

A further five cases were added to the family outbreak in Foios which had been detected last week. Regarding the Rafelbuñol meat factory cases, of the five tests one was positive and active, while the other four relate to previous infections.

On Tuesday a family outbreak with three positive cases was detected in Fortelany, Valencia, and by Friday that number had risen to six.

On Wednesday an outbreak of 10 was announced in Gandia but by Friday that number had jumped to 49.

On Thursday new outbreaks were announced in Benidorm, involving four cases in a single family, and another outbreak in Peñiscola of three cases in a family from Càlig. And on Friday a new outbreak in the town was announced of 11 cases: 3 from Zaragoza, 2 from Madrid and 6 from Teruel.

Friday also saw new outbreaks in Burjassot (10 people in an NGO), two outbreaks in Valencia with a total of seven cases which had been imported by temporary workers from Lleida and a family outbreak of seven in Manises, one of whom was hospitalised. In Elche an outbreak involving three families caused three positive cases.

On Saturday night the Valencian coast was lit up with fireworks from Sagunto in the north to Oliva in the south, as part of the Torna la Llum (bring back the light) event.

The event, organised by Piroval (the association of firework manufacturers in the Valencian region) was subsidised by the Valencian provincial government to the tune of €300,000.

Valencia is famous for its magnificent night time fireworks displays, castillos, as well as the deafening daytime masceltàs.

The aim of Saturday night’s initiative was to give a boost to the fireworks industry, a very significant sector in the regional economy, but a sector which has been decimated by the Coronavirus pandemic due to the cancellation of all local fiestas this summer.

President of the provincial government, Toni Gaspar, said, ‘We wanted to contribute towards the reactivation of traditional Valencian sectors affected by the pandemic. This help to the fireworks industry, added to those agreed for Las Fallas artists, florists and traditional dressmakers, reflects our promise … with something as symbolic as bring back the light to our towns after these months of such darkness we’ve had to go through.’

Benidorm’s famous Levante beach was at almost full capacity on Friday, the first day beachgoers had their own pre-booked parcelas on the sand.

Visitors to the city of skyscrapers must now book their own socially distanced space on the beach at: www.benidormbeachsafety.es

Reservations can be made from 12pm for the following day, or the same day, if there is availability. Once the form is completed, online users receive an email with a link to download their ticket or ‘passbook’ which they then show at one of the entrance points.

Beach plots can also be booked in person at one of the three reservation points. Morning, afternoon or whole day slots can be booked.

Benidorm mayor, Toni Pérez said that, ‘At the moment we’ve only activated the platform for Levante beach, as that is where the greatest demand has been and the need to control the flow and numbers of people. The Mal Pas and Poniente beaches will continue to operate as they have up until now. The demand and flow of people doesn’t [yet] require the use of the platform.’

It is also not necessary to book a plot if visitors only want to go to the beach and have a swim between the hours of 9h and 21.30h without staying on the beach. They can go in through one of the access points and leave their belongings in the space indicated by staff.

Pérez commented that the reservation system and controlling of numbers included in the Benidorm Beach Safety project means that ‘as well as offering possibly the safest beaches in Europe, which since they re-opened on 15 June have seen more than 381,000 visitors, with daily peaks of more than 29,000 people, now we can continue guaranteeing these beaches for everyone, everyday.’

Reasons for rejecting the jobs have been varied, although the main reason given is simply preferring to have a different job.

Being positioned far away from their place of residence was another important consideration. The positions were allocated on a province-wide basis, meaning someone living in Sagunto could technically be posted in Oliva.

On Thursday a large forest fire broke out in Monòver, Alicante, and took fire fighters nearly 24 hours to stabilise the situation, working throughout the night.

Dozens of people had to be evacuated from their homes and an estimated 130 hectares went up in flames. A man has been arrested for starting a forest fire through negligence and he was later let out on bail.

This week there have been a couple of incidents in the province. On Wednesday a smaller fire occurred in Utiel and on Friday there was a blaze in Alcoy, although the Monòver fire is the biggest so far this season.

Valencian President, Ximo Puig called for people to be careful this summer about the risk of fires and reiterated the importance of the region’s forests.

On a final note this week, if you’d like to join us on Valencia in English, we’re currently looking for someone with online media sales and marketing experience, to sell traditional advertising and branded content, with a good grasp of social media and content marketing – preferably with a good enough knowledge of the Valencia region. The role could be part-time, freelance or full-time. If you speak some English, even better – but it doesn’t have to be fluent or native level. Email us at: admin@spainenglish.com