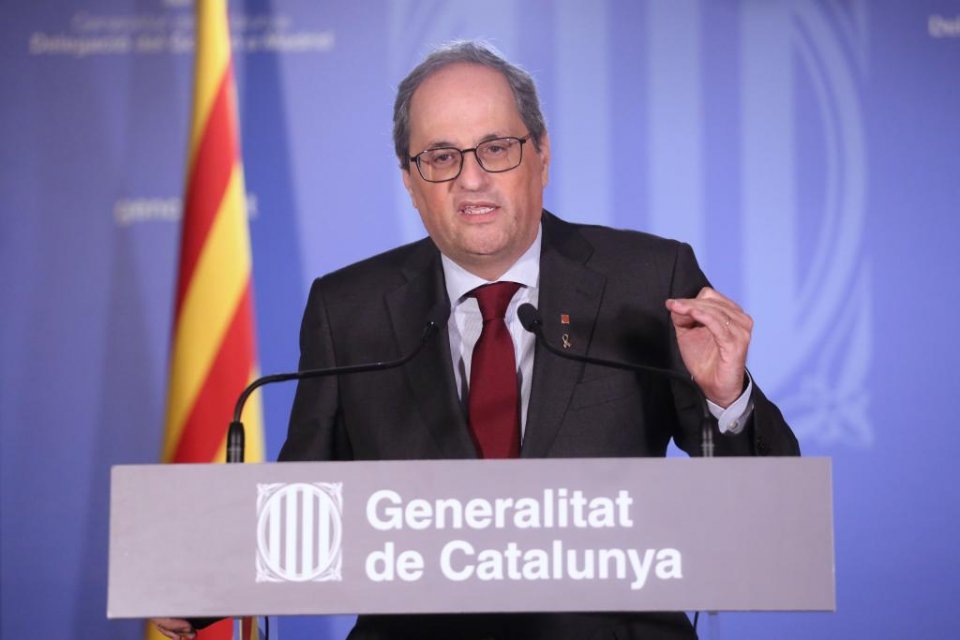 Catalan president Quim Torra faced a hearing at the Spanish Supreme Court in Madrid on Thursday, regarding the final ruling on whether he will be barred from office for ‘disobedience’.

In December 2019, Catalonia’s High Court of Justice had barred Torra from public office for 18 months and also fined him 30,000 euros for disobedience. Yet the decision was not final and, following an appeal, the Supreme Court will now have the last word.

The disobedience was for failing to remove yellow ribbons and banners calling for the release of the jailed Catalan leaders from the Catalan government’s headquarters during an electoral campaign, as ordered by Spain’s Electoral Authority (JEC).

Quim Torra did finally comply with the order to remove the yellow ribbons and banners [see sequence of links to previous reports below], but not by the time of the deadline set by the electoral authority. A criminal case against him was subsequently opened after the Ciudadanos (Cs) and People’s Party (PP) groups appealed.

The issue of yellow ribbons on government and public buildings across Catalonia has caused a political row in Spain since the leaders were first held in pre-trial custody for their roles in the October 2017 referendum.

The issue became even more intense after the nine politicians and activists were jailed for between 9-13 years by Spain’s Supreme Court on 14 October 2019. They were found guilty of sedition, following the high-profile trial over the independence referendum – with the verdicts causing widespread protests across Catalonia.

The final ruling regarding Torra’s disqualification for disobedience is expected to be known within the next few weeks. If Torra is barred from office, Catalonia would enter an interim period in which the government’s vice president, Pere Aragonès, would become acting president – until a new leader is picked by the parliament.

If Catalan MPs do not reach an agreement within two months, a new election would be automatically called two months later.

In Madrid’s Supreme Court on Thursday, Torra’s defence lawyer, Gonzalo Boye, argued that hanging the banners on public buildings, including the government headquarters in Barcelona, was a ‘political act’ and, therefore, Torra was protected by his immunity as a Catalan MP.

Asking the Supreme Court to overturn the Catalan president’s disqualification from office, Boye said that Torra had merely been using his freedom of speech and his fundamental rights of political participation.

He also argued that Spain’s Electoral Authority (JEC) had not been impartial when acting against the pro-independence banners, referring to the fact that one of the board’s members was found to be at the same time an advisor for the Ciudadanos (Cs) party – a political group firmly opposed to Catalan independence.

Torra’s lawyer also argued that the one-day trial that saw him disqualified pending the appeal back in December 2019 was ‘not partial’ either, and that his plea to take the case to the European Court of Justice was rejected before a verdict was issued.

Yet the public prosecutor’s office, represented by lawyer Pilar Fernández, said there was ‘no obligation’ for the judges to refer to Europe even if requested by the defence – therefore she rejected claims of ‘partiality’.

Fernández also contradicted Boye saying that the act of hanging signs in the government’s official buildings ‘is not a political act, but administrative’.

As for the ‘popular prosecutor’, represented by the far-right Vox party, lawyer Marta Castro ruled out any of the arguments provided by Boye, saying: ‘Mr. Torra not only admitted he would not abide by the electoral board, but he boasted about it.’ She also said that freedom of speech ‘is not an unlimited right’.

Catalan president Quim Torra issued a statement at the Catalan government’s delegation in Madrid, shortly after the hearing on Thursday.

‘I have come to Madrid to look into the eyes of the court that wants to bring down another President of the Government of Catalonia,’ he started.

‘These magistrates of the Supreme Court who are to decide whether to disqualify a democratic and legitimate president from office for defending free speech, justice for political prisoners and the return of those in exile, these magistrates today hold in their hands something much more important than my political future. They do not wish to disqualify me for any banner; but for a banner that defended the fundamental rights denied to us. This is an utterly disproportionate legal action, lacking all sense of justice.’

You can click here to read the full statement.

▶️ #President @QuimTorraiPla: “This is not a punishment imposed on me because of a banner, but a punishment for a whole country in the middle of a pandemic. Can anyone remember such a thing in a European democracy?” pic.twitter.com/IWRooh8Xns

ALSO READ (27/9/19): Banner removed from Catalan government HQ – then replaced with new one

ALSO READ (2/9/19): Catalan president to go on trial for ‘disobedience’

ALSO READ (20/3/19): Yellow ribbons to be removed from government buildings