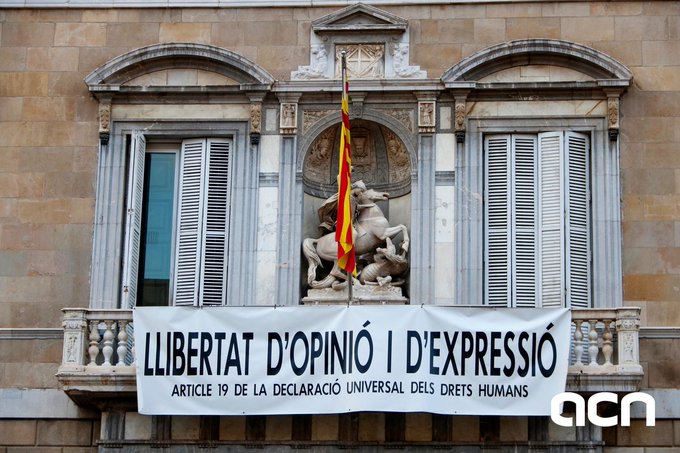 The banner hanging from the Catalan government’s HQ in Barcelona in support of the jailed political leaders was finally removed by two public servants on Friday afternoon – and then replaced by a new one.

This followed a week of orders by Spain’s High Court in Catalonia (TSJC) to take the banner down and Catalan president, Quim Torra, refusing to do so.

Torra had it removed only after the deadline set by the judges expired and a matter of minutes after the court ordered the police to remove it ‘immediately’.

The unionist organisation Impulso Ciudadano launched a lawsuit against Torra alleging that the yellow ribbon is a partisan symbol, and therefore shouldn’t be hanging from the government building.

It’s the second time that Torra has been ordered to take down symbols deemed political.

On 18 November, the Catalan president will face trial for defying orders from Spain’s Electoral Authority (JEC) to remove the yellow ribbon during an election period. If found guilty of disobedience, he could be sacked as president and banned from public office.

On this occasion too, Torra ended up having it removed but once again after the deadline.

Later in the day another banner was hung from the government building, with the phrase: ‘Freedom of opinion and expression. Article 19 of the Universal Declaration of Human Rights.’

The banner in favour of freedom of expression was hung by leading members of the independence movement: singer and activist Lluís Llach, former MP Antonio Baños, actor Sílvia Bel, and linguist Teresa Casals.

In fact, it is the same banner that Torra ordered be put up on 22 March, after the banner in support of the jailed leaders was taken down to comply with the Electoral Authority.