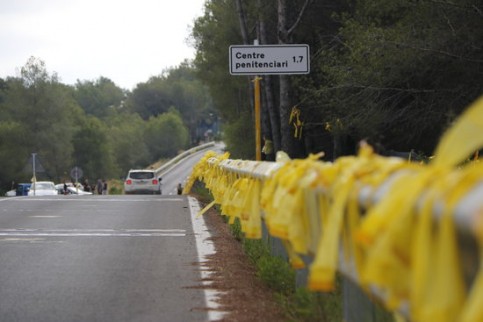 A group of activists was caught this weekend removing yellow ribbons, which has become the symbol showing solidarity with the political leaders jailed around Catalonia.

Nine pro-independence politicians and activists continue in pre-trial jail, with some of them locked up now for over 300 days.

ALSO READ: No interference on charges against Catalan leaders

It is not the first time that groups of people have removed such symbols, but this time is slightly different. One of those identified by the Catalan police, the Mossos d’Esquadra, is an officer from the Spain’s Guardia Civil police force.

The events happened in the southernmost part of Catalonia, near the Ebre estuary.

Box cutters, hooks and a map

The 14 people that removed yellow ribbons, pro-independence symbols and banners demanding the release of the ‘political prisoners’ were caught with box cutters, hooks, dark clothes, handkerchiefs, and maps of several towns marked with some routes.

Other attacks by Spanish police

This incident comes a month after another Spanish police officer attacked the Catalan photojournalist Jordi Borràs, much of whose work focuses on far-right movements.

On 7 August, two pro-independence MPs said they were suing a Spanish police officer for allegedly insulting them and spitting at them while they passed a Barcelona police station in July.

‘We cannot let them insult or attack either Catalan MPs or citizens,’ said Torra on Sunday.

The Catalan vice president, Pere Aragonès, reacted in the same vein, demanding an end to ‘impunity’ for individuals removing such signs.

Aragonès also criticized some unionist parties, such as Ciutadans (Cs), for encouraging people to remove the ribbons, warning that he thinks it could lead to a ‘social fracture’.

Yet the leader of Ciutadans, Albert Rivera, fought back and accused the Catalan government of using the Mossos d’Esquadra as ‘political police’.

‘[The Catalan president] orders protection for illegal separatist signs in public spaces and pursues those who remove them, it is the world turned upside down,’ he said.

Meanwhile, a light aircraft has flown over some Catalan beaches in the past few days, towing a banner calling on people to remove yellow ribbons.

The España Ciudadana platform, which is close to the Ciudadanos (Cs) party, launched the campaign, as the group flatly rejects such symbols in public spaces, including beaches, as this ‘aims to coerce and reduce the space for freedom of all citizens,’ it claims.

In May, a group of people in balaclavas  damaged an installation made of yellow crosses on a beach, which led to a confrontation between unionist and pro-independence groups, leaving five people injured.

A few days later, a Ciutadans MP removed a yellow ribbon in Parliament.