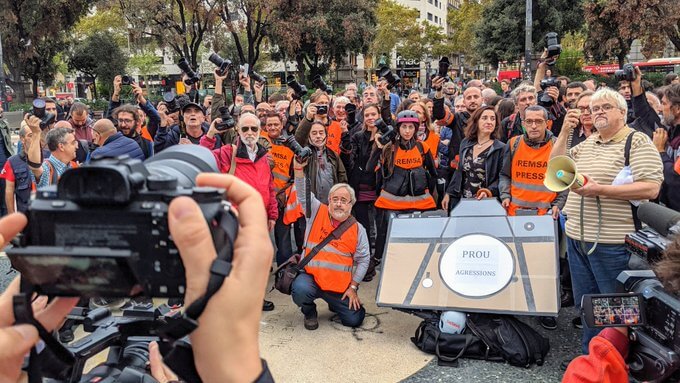 When the Spanish Supreme Court announced its verdict on the Catalan independence leaders on Monday 14 October, sentencing nine politicians and activists to jail for between nine and 13 years, a backlash in Catalonia had always been expected.

Few, however, expected the protests to be so intense, widespread and persistent. They are now in the ninth night.

Most nights during last week saw violent clashes between police and protestors, with demonstrators burning barricades in Catalonia’s biggest cities and towns. This is how events have unfolded:

Whilst the verdict’s aftermath saw protests spring up everywhere, by far the largest rejection of the court’s decision came at Barcelona El Prat airport, which saw thousands of demonstrators heeding the call of the anonymous Tsunami Democràtic protest group to bring the airport to a standstill.

More than a hundred flights had to be cancelled that day as thousands of protestors occupied the airport and clashed with police for around 10 hours. At the same time tens of thousands rallied against the sentences in the centre of Barcelona and other cities.

The next day, the focus shifted to the Catalan towns and cities, as civil unrest burst onto the streets of Barcelona, Girona, Tarragona, Lleida, and more, when peaceful pro-independence demonstrations descended into turmoil late in the evening.

Dozens of people were arrested and injured in clashes on the streets that saw Catalan and Spanish police confronted with groups of mostly young protestors, who built barricades, lit them on fire, and threw objects at the riot officers.

With Spanish authorities urging pro-independence leaders to distance themselves from ‘violent attitudes’, president Quim Torra insisted ‘violence does not represent us’ on the first day of the five Marches for Freedom, that saw demonstrators begin making their way to Barcelona. The Marches for Freedom drew participation from hundreds of thousands.

That night, however, there was more unrest in the Catalan capital and other major cities, such as Girona and Tarragona, with police firing rubber bullets and using tear gas to disperse protestors who again barricaded the streets.

Catalan president Quim Torra addressed the Catalan Parliament for the first time since the Supreme Court sentence was released. His proposal for a new referendum was seen with skepticism by his pro-independence allies, whilst all opposition parties criticised his handling of the crisis, with most urging him to step down from his post.

In the evening, a demonstration of far-right neo-nazis was met with an anti-fascist counter-demonstration in the same square, in the Barcelona neighbourhood of Sarrià. Later, the group of roughly 300 neo-nazis marched to the peaceful protest taking place by Passeig de Gràcia, leading to violent attacks and political outrage at how the group were able to march such a distance unaccompanied by police.

A general strike on Friday brought over half a million people to the streets of Barcelona, also coinciding with the arrival of the Marches For Freedom to the Catalan capital.

That night then saw some of the biggest riots in Barcelona of the week, with thousands clashing with police at night in the central areas of Plaça Catalunya and Plaça Urquinaona and their surroundings.

A demonstration against police violence began during the day on Via Laietana, in front of the headquarters of the Spanish National Police, and later clashes descended the situation into chaos.

Police fired rubber bullets at protestors, as well as beat them with batons and threw tear gas at them. For the first time, a water cannon was used by the police, but this was for the purpose of putting out fires, rather than against gathered demonstrators. In all, the Catalan police arrested 54 people during the night, with the medical emergency services treating 182 people across the country.

On Saturday, the tension began to calm for the first time in the week. Thousands still took to the streets to stage sit-in protests in front of the Spanish National Police barracks, as rally-goers demanded ‘freedom for the political prisoners’ and also the end of ‘police repression’ against them. The group was then moved to the Arc de Triumf area, and while some police charges were reported, the riots of previous nights were not replicated. Major clashes were prevented by a group of activists that formed a human chain separating demonstrators and police.

A media observatory group also released details on Saturday that a total of 58 journalists had been injured in the clashes during the week.

Sunday saw the seventh night of protests around Catalonia against the sentences handed down to nine independence leaders found guilty of sedition by Spain’s Supreme Court. Yet, it was the first night since the protests began that protestors did not clash violently with police.

President Quim Torra tried to call Spain’s acting prime minister Pedro Sánchez on a number of occasions, but he rejected the attempts at communication, with the Spanish government arguing that Torra had to ’roundly’ reject the violence before talks could take place.

Nevertheless, thousands of people again took to the streets, both in Barcelona and other cities, and whilst it was the first night for a week without barricades lit on fire and riot officers facing off against protestors, there were six arrests in all and at least three people were injured.

Injuries and arrests in numbers

In total, 593 injuries were reported during the first week of turmoil, with 13 people still in hospital. Four people lost an eye, most likely as a result of being struck by rubber bullets fired by police officers.

Around 200 people were arrested throughout the country, with 104 of those passed through the court already. Of those, 28 have been sent to prison without bail, and 76 have been given freedom but with conditions.

The protests in Catalonia entered their second week on Monday, with a number of demonstrations that were largely peaceful and did not descend into the unrest seen previously.

In central Barcelona, coinciding with the visit of Pedro Sánchez, scores of protestors held an impromptu sit-in near the Spanish government’s delegation, which officers of Spain’s National Police had already managed to cordon off before the demonstrators arrived.

Around 8.30pm, the Committees in Defence of the Republic (CDRs) groups called off its protest outside the Catalan interior ministry to demand the resignation of minister Miquel Buch, after some of the 2,700 protestors threw balloons full of paint against a police riot van.

Other objects, such as eggs and glass marbles, were also thrown but did not reach the ministry building, which the Catalan police had cordoned off. After the protest was called off, the protestors began marching through the centre but remained peaceful.

In Sabadell, near Barcelona, some 500 protestors marched peacefully through the streets calling for the independence leaders to be freed. After police blocked their way to the local tax office, the protestors went on to cut off the Gran Via avenue for about 15 minutes.

Meanwhile, about a thousand people gathered outside the Mas d’Enric prison, in the southern region of Tarragonès, to call for the release of two local people arrested by tpolice during a protest in the city of Tarragona last week.

At 7pm local time, the CDR groups called for people to gather at Plaça Espanya, one of the central squares in Barcelona linking Parallel Avenue, Gran Vía, and other important streets.

Hundreds of people have participated in the protest, with many of them dumping dishwashing liquid into the fountain to ‘clean the injustice off the streets’.

Other protests taking place included one of journalists in Barcelona’s Plaça Catalunya, voicing anger at the heavy-handedness that police treated clearly identifiable journalists with during last week’s riots. There were also more protests called in Tarragona, Vic, Mataró, and other places around Catalonia.