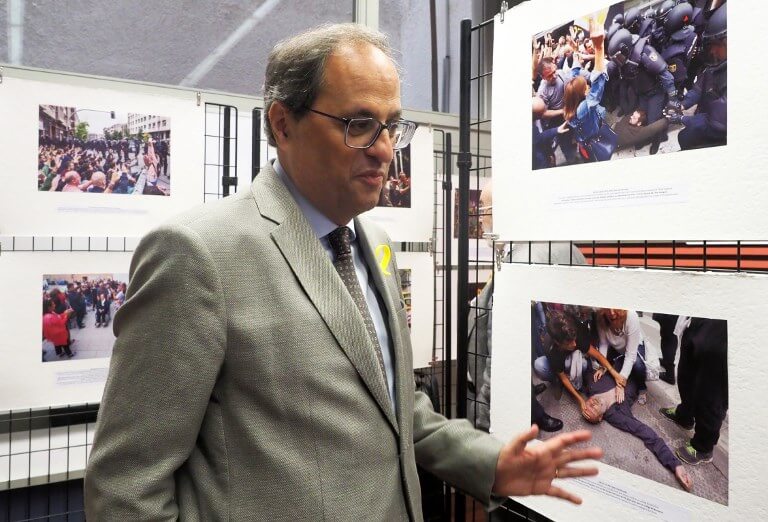 Catalan president Quim Torra has announced he will keep yellow ribbons on the façades of public buildings, thus defying orders from Spain’s electoral authority deeming them as ‘partisan symbols’ that should be removed during election periods.

Torra has argued that it is within ‘freedom of speech’.

‘We won’t give up freedom of speech,’ he stated on Thursday morning. ‘We don’t want to live in fear and we will not live in fear, rights, and freedoms have been at stake in this country, since several years ago.’

According to him, the electoral authority’s decision is ‘a new attempt by Spain to eliminate and violate one of [Catalonia’s] fundamental rights.’

Following a complaint by unionist Ciudadanos (Cs) party, the electoral authority gave Torra a 48-hour deadline on Monday to take down all Catalan independence flags and yellow ribbons – a symbol in support of jailed and exiled pro-independence leaders.

Torra also urged parties like Cs to stop spending their life ‘filing lawsuits’ and called on them to ‘do politics’ instead.

Torra challenged the electoral authority decision and urged the public body to reconsider its decision.

According to Cs spokesman, Carlos Carrizosa, if Torra did not have the symbols removed before the deadline, his party would appeal to the electoral authority to take action and, if necessary, take the issue to the courts.

At the same time, Cs has put forward a motion in the Catalan parliament to condemn the government for ‘taking advantage’ of its authority to turn public buildings into ‘showcases for separatist propaganda’.

So far, pro-independence parties had already condemned the decision before rejecting to comply with it.

The Spanish justice minister, Maria Dolores Delgado, had also warned Torra that failure to comply with the order would lead to penalties on behalf of the electoral authority, which could react in one of two ways.

Meanwhile, on Thursday morning, Cs has also called on the electoral authority to send the Catalan police to remove the ribbons from public buildings.

The unionist political force also asked for the ‘breach’ to be taken to the public prosecutor, due to the possibility of Torra’s decision carrying ‘criminal responsibilities’.

She said that if the ruling by the electoral authority is not complied with, ‘the full force of the law should be applied’ to Torra.

According to her, the ‘sanctions system’ should be enforced in this case.