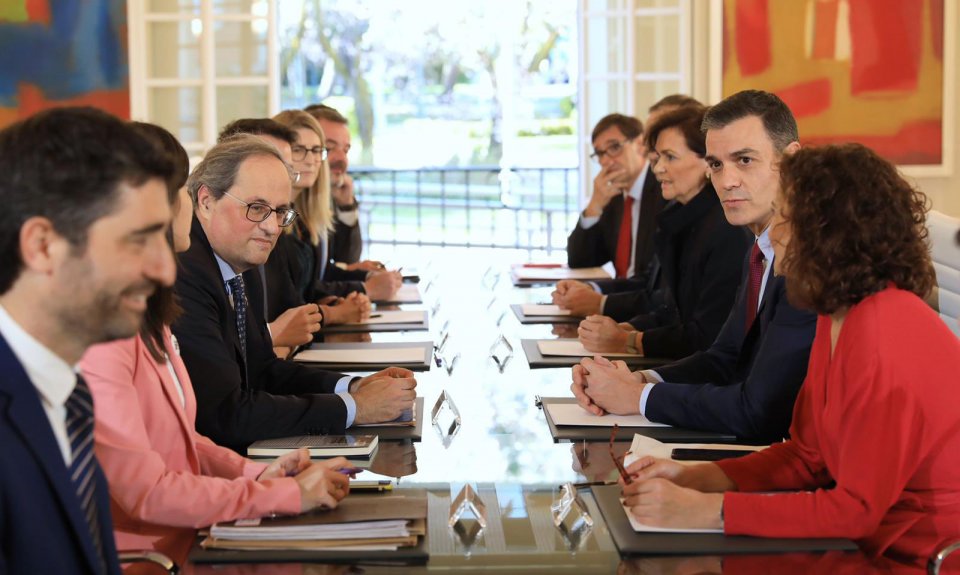 The first round of the ‘bilateral negotiation table’ talks between the Spanish and Catalan governments kicked off in Madrid on Wednesday, with the overall objective to resolve the Catalan political conflict. The first meeting took place at Moncloa, the official residence and office of the Spanish Prime Minister, Pedro Sánchez.

The two governments have agreed to follow up with meetings held on a monthly basis. They will be held alternately in Madrid and Barcelona, with the Spanish prime minister and his deputy prime ministers, as well as the Catalan president, attending only ‘when it is necessary to ratify political agreements’.

The concept of the ‘bilateral negotiation table’ dialogue process was a prerequisite for the pro-independence Esquerra Republicana (ERC) party abstaining in the investiture vote for Sánchez to become prime minister again in January, thereby facilitating the Socialist (PSOE) leader taking office again.

The ERC-PSOE agreement set details for the creation of the bilateral negotiating table and stated that ‘political means’ should be favoured whilst ‘overcoming the judicialisation’ of the Catalan independence conflict.

After the first three-hour bilateral meeting on Wednesday, the two parties released a joint statement to say that they were committed to ensuring any agreements reached during their negotiations are ‘within the framework of legal certainty’.

The eight-strong Catalan delegation was headed by president Quim Torra. They met with seven members of the Spanish executive, led by Spanish PM Sánchez. Spanish deputy PM Pablo Iglesias was absent due to illness.

Speaking to the media following the meeting, Torra said: ‘Unfortunately we have not received a clear response from the Spanish government on our demands for an amnesty and self-determination.’

Whilst Torra said that he applauded the dialogue between the governments, he still feels the need for there to be a mediator present in the talks.

Spanish government spokeswoman María Jesus Montero called it an ‘important first step towards normalising institutional relations’ between the two governments. ‘We should not expect short-term results from these talks.’

Montero viewed the meeting favourably as there was a ‘willingness’ to talk on both sides, as not doing so over the past number of years had proved ‘counterproductive’.

Almost two and a half years after the peak of the Catalan independence crisis in 2017, which saw a referendum and the subsequent exile and incarceration of its leaders, the Catalan and Spanish governments met to talk about the political conflict for the first time face-to-face.

Wednesday’s official meeting between the two governments follows on from newly-elected Sánchez‘s meeting with the Catalan president Quim Torra in Barcelona on 6 February. It was the first time they have held any official talks since December 2018.

People’s Party (PP) leader Pablo Casado said the meeting would break up Spain’s sovereignty in his Wednesday morning speech in the Spanish Congress and criticised Pedro Sánchez’s decision to have health minister Salvador Illa, who also happens to be Catalan, attend the meeting.

‘[Sánchez] is even taking the health minister with him [to talks with the Catalan government] to negotiate with the pro-independence virus rather than implementing measures to mitigate the effects of the coronavirus,’ Casado said.

Ciudadanos (Cs) used their time in the Spanish Congress to question how the meetings would be funded, with MP Edmundo Bal wondering whether they would be paid for with the tax money of all Spaniards’.

Coronavirus confirmed in Tenerife and Catalonia – via Italy