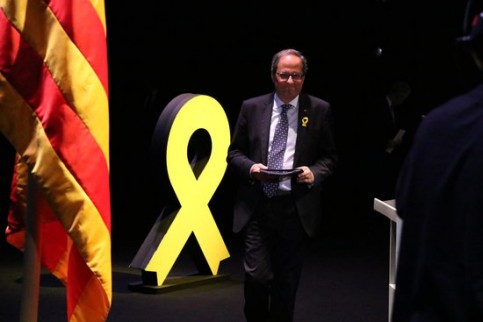 The Catalan president Quim Torra is to face trial for the alleged crime of disobedience for going against the orders of the Spanish electoral authority (JEC) and not removing the yellow ribbon from the front of the Catalan government building in Barcelona.

The crime of disobedience that Torra is accused of does not carry a prison sentence, yet he could be ousted from his position as president of Catalonia should he be found guilty.

In the build-up to the Spanish general election in April, and in the midst of the trial against many 12 Catalan politicians and leaders, Torra was ordered by the Spanish electoral authority to remove the symbol that represents solidarity and support to the jailed and exiled leaders.

The electoral authority deemed the yellow ribbon ‘partisan’ and unsuitable for public buildings during election periods.

At first, Torra resisted, before then removing the yellow ribbon and replacing it with a banner reading ‘Free political prisoners and exiles’.

The public prosecutor recommended Torra be barred from public office for 20 months as well as face a €30,000 fine this week, and on Friday the Catalan High Court announced that the Catalan president will face trial.

Earlier this month, the pro-independence leader admitted to disobeying the orders when facing the court in relation to the case. ‘Yes, I disobeyed, because I owe a debt to a higher public mandate to defend human rights,’ he stated.

Eventually, Torra complied with the order to remove the yellow ribbon, but the symbol returned to the government building’s facade as soon as the elections had finished.