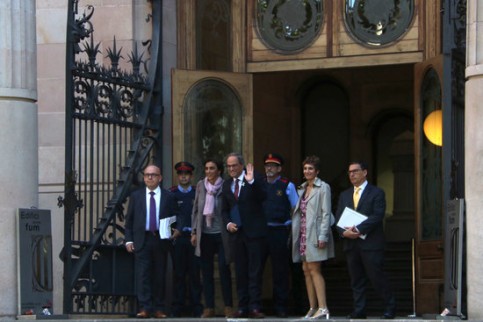 Catalan President Quim Torra appeared in a criminal court in central Barcelona on Wednesday, as part of an investigation into possible civil disobedience over his refusal to remove republican flags and pro-independence yellow ribbons from public buildings during the Spanish election campaign.

Torra spent approximately 40 minutes responding to questions from Catalonia’s most senior judges, related to his initial refusal to order the symbols to be taken down and his belated decision to have them replaced by other banners in favour of civil liberties.

In a statement on social media before arriving at the High Court in Barcelona, the head of the Catalan government vowed to call out the Spanish state for ‘authoritarian drift’ after its electoral authority ruled that symbols of support for imprisoned and exiled leaders of the independence movement were a breach of election impartiality regulations.

Torra added he was committed to defending freedom of expression “whatever the consequences”.

Representatives from the government, as well as pro-independence political parties and organizations, lined the street leading up to the court in solidarity with Torra.

After the hearing, Torra said to the press that he will pay any price necessary for his acts, and argued: ‘It is not possible to obey an illegal order which violates fundamental rights.’

The High Court is considering accusations by Spain’s public prosecutor that the president ‘consciously and willfully’ ignored the electoral authority by maintaining, ‘though at times concealed or symbolic’, images of ‘the same ideological or partisan nature’.

Civil disobedience is the deliberate act of opposing a ruling by a state authority.

Under Spanish law, it is not punishable by prison but anyone found guilty of the offence may be subjected to a fine or, significantly for the president, barred from public office.