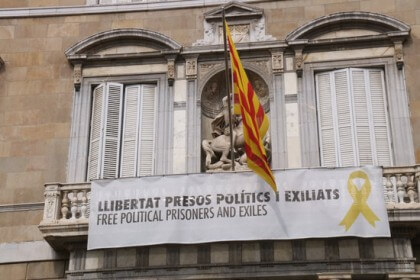 Catalan president Quim Torra and his cabinet have decided to defy an ultimatum from the Spanish Electoral Authority and maintain the yellow ribbons on government buildings.

Torra was given a second chance to remove the ribbons, a symbol in solidarity with jailed and exiled pro-independence leaders, by 5pm this afternoon – or else he would face the threat of criminal charges and at least a fine of up to 3,000 euros.

President Torra said he has requested a report from the Catalan ombudsman into the implications of the ruling on freedom of expression before taking any final decision.

The head of the Catalan government requested on Tuesday afternoon, a few hours shy of the ultimatum, to extend the 24-hour deadline while he consults the ombudsman.

Yet the Spanish Electoral Authority denied his request and maintained its ultimatum, alleging it to be sufficiently clear.

Torra has repeatedly defended yellow ribbons as enshrined in the right to freedom of expression, and dismissed electoral authority rulings deeming them as partisan and therefore unfit for public buildings during an election period.

The unionist Ciudadanos (Cs) party, which made the original complaint about the yellow ribbons to the authority, took a wait-and-see attitude, with party spokesman, Carlos Carrizosa, saying ‘we don’t want to get carried away.’

Having failed to comply with the initial order from the electoral authority, Torra is now ‘in the terrain of criminal disobedience,’ Carrizosa said, adding that the party would wait to see the reaction of the Spanish authorities before taking further action.

As for the Catalan Socialists (PSC) spokeswoman, Eva Granados, said while the party saw no problem with government members wearing yellow ribbons on their lapels, they ‘should leave the façades of public buildings alone, which belong to all.’