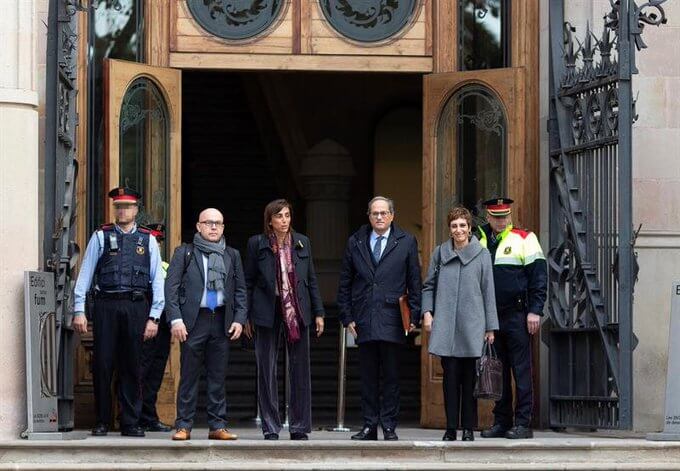 If found guilty, the head of the Catalan government could be barred from office for up to two years and therefore sacked from his job.

The president is being prosecuted for failing to comply in time with an order from Spain’s Electoral Authority (JEC) to remove symbols from the front of the government building in Barcelona in the run-up to the Spanish general election at the end of April.

A few hundred people gathered outside the court in order to back Torra on his way to the building.

In the build-up to the Spanish general election in April, and in the midst of the trial against Catalan politicians and leaders who have now been sentenced to up to 13 years in prison, Torra was ordered by the Spanish electoral authority to remove the symbol of yellow ribbons that represents solidarity and support to the jailed leaders.

The electoral authority deemed the yellow ribbon ‘partisan’ and unsuitable for public buildings during election periods.

At first, Torra resisted, before then removing the yellow ribbon and replacing it with a banner reading ‘Free political prisoners and exiles’.

The public prosecutor recommended Torra be barred from public office for 20 months as well as face a €30,000 fine, and the Catalan High Court announced that the Catalan president would face trial – which finally took place today. A verdict is expected within 14 days.