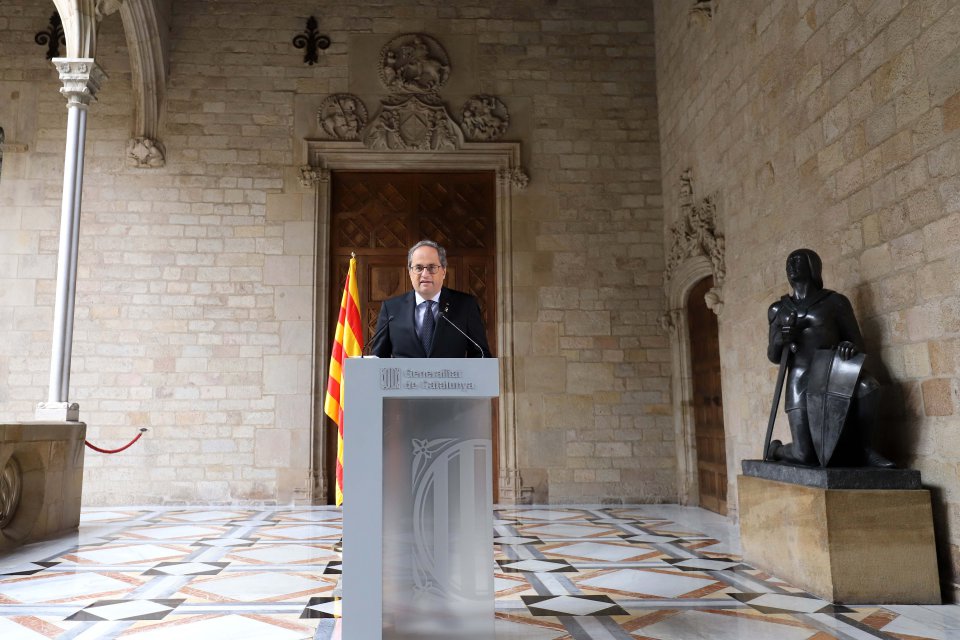 Catalan president Quim Torra has announced new elections in Catalonia as soon as the budget is approved.

‘This term has reached the end of the road,’ he said in a statement on Wednesday. Torra’s own MP status was withdrawn on Monday, following an on-going battle after being disqualified from office for disobedience.

Torra’s Junts per Catalunya (JxCat) government ally, the Esquerra Republicana (ERC) party, accepted Spain’s judicial decision to strip the president of his MP seat, which caused a huge row in the Catalan parliament on Monday – and a rift in the Catalan independence camp.

Torra has accused Esquerra of a ‘lack of loyalty’ and called on the pro-independence camp to ‘return the path of unity’.

Torra is still due to meet the newly elected Spanish prime minister Pedro Sánchez in Barcelona on 6 February. The meeting follows on from Sánchez’s pledge to commit to dialogue over the Catalan political crisis – an agreement made with the ERC party in order to gather enough support to stay in power. The ERC-PSOE agreement sets out the creation of a bilateral negotiating table between the Spanish and Catalan governments.

Although Torra announced that the current term ‘is over’, he said he would not be calling immediate elections because there were two issues to be sorted out beforehand. In addition to getting the budget passed, Torra also he wanted to ‘explore whether Spain’s government has a true will of dialogue and to put an end to repression.’

The ERC party issued a statement saying it ‘respects’ his decision to call a snap election and said they also share his idea that the budget and talks with Spain needed to be done before ending the term.

Torra had expressed outrage at the parliament speaker, Roger Torrent (ERC), accepting orders on Monday to withdraw his MP status, despite still recognising him as president. It comes after Spain’s electoral authority (JEC) stripped Torra of his MP status and the Supreme Court ratified it.

Torra said, ‘It’s essential to let citizens have their say again in order to renew the political mandate of 21 December 2017. I want a country that’s radically democratic, where governments and parliaments operate based on majorities and relationships of trust, and where, when these elements are lacking, it’s always our citizens who determine the new majorities and renewed relationships of trust.’

With regards his upcoming meeting with Sánchez, Torra said, ‘I want to see whether the Spanish government intends to put an end to repression and guarantee respect for fundamental democratic principles.’

He said he had a responsibility to determine whether the Spanish government is committed to engaging in ‘real negotiations’ that ‘address the political conflict Catalonia faces as a result of the Spanish state’s refusal to allow the full exercise of democracy and our right to self-determination’.