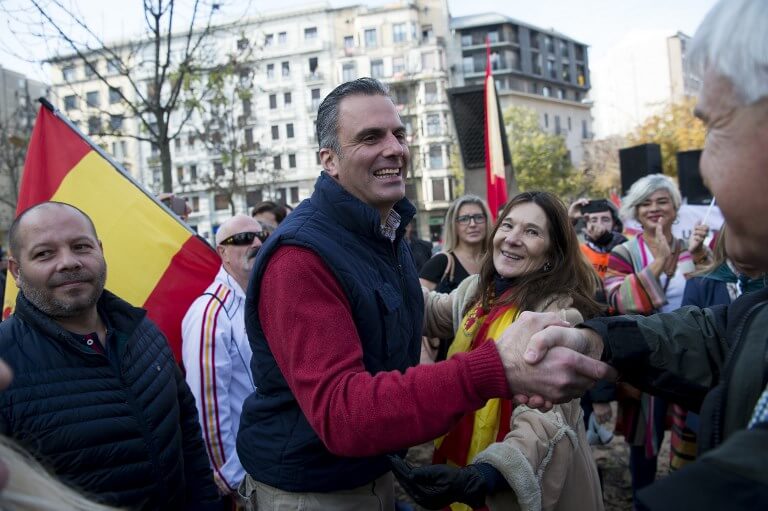 Far-right Spanish party Vox is on track to get a global soapbox as it takes part in the much-hyped trial of Catalan pro-independence leaders as a ‘popular prosecutor’ – a Spain-specific legal mechanism that has left Madrid embarrassed.

Vox burst on to the political scene by winning 12 seats in southern Andalusia’s regional parliament in December.

The party, which vehemently opposes illegal immigration and supports the scrapping of tough laws against gender violence, also plans to send a few MEPs into the European parliament in May elections.

Its involvement in the upcoming trial of Catalan independence leaders will be as so-called ‘popular prosecution’, a set-up which allows any citizen or organisation to be an accuser in court alongside public prosecutors.

‘That would have been impossible in countries like the Netherlands, Belgium, Germany or Denmark,’ he said last month in a written interview with Catalan radio.

A high-level official at the justice ministry, who refused to be named, said for Vox to be given such a platform in a sensitive, divisive trial was a ‘pity’, regretting that this popular prosecution can be used ‘with partisan intentions’.

According to the Supreme Court, popular prosecution has no equivalent elsewhere in Europe.

In the Supreme Court where 12 Catalan leaders will be tried, lawyer Javier Ortega Smith, Vox’s secretary-general, will take a seat next to the prosecutor and the state attorney.

He will be able to question the defendants and witnesses after them.

The popular prosecutor also has access to all files in the case and can intervene during the pre-trial court probe.

The far-right party has called for 74 years in jail for Junqueras, while prosecutors and the state attorney – which represents the state – are asking for 25 and 12 years respectively.

Criminal lawyer Ruben Martin de Pablos says popular prosecution has been in all Spanish constitutions for 200 years and adds that other parties use it too.

‘It’s been useful to unveil many corruption cases,’ he says, or for suing former Chilean dictator Augusto Pinochet in 1998, for instance.

But we’re seeing that ‘a new party can use it to make itself known and get an extraordinary, free showcase’, he added.

‘The law allows it, we can’t do anything apart from criticise the situation and perhaps change it in the future.’

Ignacio Gonzalez Vega, spokesman for the Judges for Democracy professional association, said ‘Vox’s presence distorts what popular prosecution is because it’s using it for propaganda purposes’.

‘We criticise any political party using criminal proceedings with spurious motives,’ he added.

But he doesn’t believe this will have ‘undesirable consequences’ and said that ‘an independent and impartial court will pass the sentence’.

Supreme Court President Carlos Lesmes said the court’s judge can interrupt Vox’s lawyer if he ‘wants to use the trial to defend his own political ideology’.

Still, for the justice ministry source, ‘parties should be excluded from the popular prosecution’.

But law professor Julio Perez Gil countered that that would be ‘completely useless’ as a member of Vox could just act on their own.

He is one of the few to believe that popular prosecution should simply be abolished.