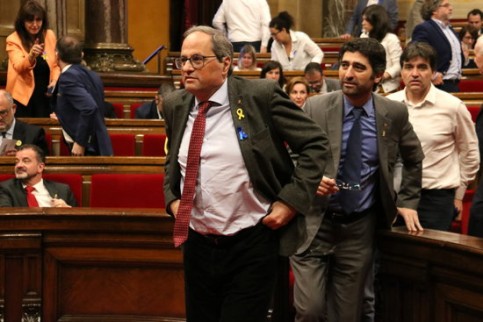 Catalan president Quim Torra has had his seat in the Catalan Parliament declared vacant by the provincial electoral board of Barcelona. It followed Friday’s decision by the Spanish Supreme Court to reject suspending a ruling from the country’s Electoral Authority (JEC) that ordered for the Catalan president to be disqualified from his post.

The JEC ruling was announced on 3 January, and had called on the provincial board to immediately declare Torra’s parliamentary seat vacant and to hand it to the next person on the electoral list, which is Ferran Mascarell.

The disobedience was failing to remove signs in time that were in favour of the jailed Catalan leaders from the Catalan government’s headquarters during the electoral campaign, as ordered by the electoral authority.

Following the 3 January decision by the JEC, Torra appeared before an extraordinary plenary session of the Catalan Parliament at his own request on Saturday 4 January afternoon, where he was ratified as president by the pro-independence parties.

Torra’s lawyers had also asked the Supreme Court to promptly suspend the JEC ruling, but the Supreme Court judges found there was no ‘particular urgency’ to do so and have given the electoral board and the public prosecutor 5 days to present their views on the matter before a final deliberation is made.

On Thursday, Spanish Prime Minister Pedro Sánchez, now officially re-elected, held a telephone conversation of approximately seven minutes with Torra, and they have agreed to meet shortly after the new coalition government has been formed.