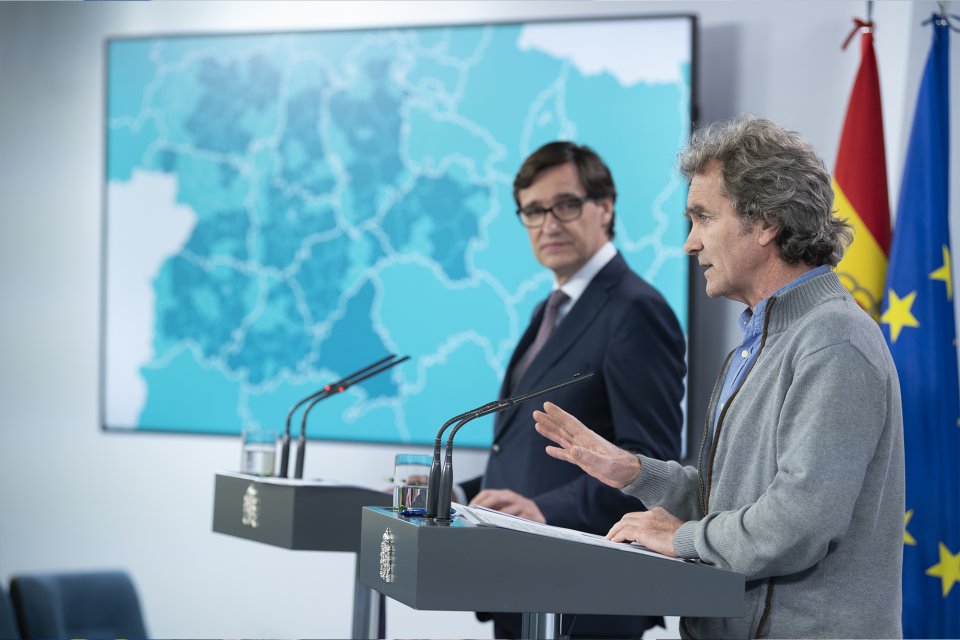 Report below updated in Spain at 12.25pm on Saturday 16 May

The latest official figures* for Coronavirus (Covid-19) released by Spain’s Health Ministry in Madrid at 12 noon on Saturday 16 May confirm that 27,563 people have now died from the pandemic in Spain, up by 102 on yesterday – the lowest daily increase since 18 March.

Official figures released daily by the Spanish Health Ministry are for the total number of people who have tested positive for Coronavirus only through a PCR test (polymerase chain reaction). That figure for Saturday 16 May is 230,698 – an increase of 539 over yesterday.

Friday’s figure for the increase of infections tested only through PCR had been 546 over Thursday. Thursday’s comparative figure had been 506 over Wednesday. Wednesday had been 439.

70% of Spain in Phase One from Monday

From Monday 18 May around 70% of Spain will be in Phase One of the government’s four-phase de-escalation of lockdown plan, that commenced officially on 4 May and is expected to last until the end of June. At the same time, around 14m people will remain for now in Phase Zero, including the two major cities of Madrid and Barcelona.

Spain’s Health Minister Salvador Illa and Fernando Simón, the director of the Coordination Centre for Health Alerts and Emergencies, announced at a press conference on Friday evening the areas of Spain that will now move to Phase One on Monday. These are:

The areas are Málaga and Granada in Andalusia; all the remaining areas of the Valencia region and the region of Castilla La Mancha; nearly all the region of Catalonia, with the exception of the city of Barcelona and metropolitan areas (north and south).

Madrid, meanwhile, will also be remaining in Phase Zero – although certain restrictions will be relaxed in both Madrid and Barcelona as part of a ‘Phase 0.5’. Parts of the region of Castilla y León will also remain in Phase Zero.

Fernando Simón also announced that the island of Formentera in the Balearic Islands, as well as the islands of La Gomera, El Hierro and La Graciosa in the Canary Islands, will all move to Phase Two from Monday 18 May.

We have published all the key rules and measures regarding the four phases in a separate report, together with full details of the current ‘phase status’ for each region and province. It is regularly updated as and when new measures are announced. The report can be found here: Lifting of lockdown in Spain – full details of all phases for all regions.

During the conference on Friday evening, Fernando Simón said that, ‘the evolution of the pandemic is very favourable’ and that ‘the Madrid region started out with many more cases than other regions’ – but that it was ‘still the region with the most daily registered cases, together with Catalonia’.

‘The Madrid region must remain for another week in Phase Zero, out of prudence,’ said Simón.

Isabel Díaz Ayuso, the right-wing People’s Party (PP) leader of the Madrid regional government, was quick to criticise the decision. She tweeted that, ‘there was no technical explanation [for why Madrid was being kept in Phase Zero]. We are not the region with the highest % contagion. We are prepared. Our businesses are ruined and each week we lose around 18,000 jobs. Madrid has fulfilled.’

The Madrid regional government, controlled by both the PP and Ciudadanos (Cs) party (with also support from the far-right Vox party), has said that the region is being discriminated over other regions, claiming it is also a political issue from Spain’s central government, which is a coalition between the socialist PSOE party (led by prime minister Pedro Sánchez) and the left-wing Podemos group (led by Pablo Iglesias).

The Madrid regional government’s vice-president, Ignacio Aguado of the Cs party, also tweeted late on Friday to claim that, ‘The decision of the Government of Spain has not been technical, but political. They have not presented a single argument that justifies that we cannot pass the phase. We complied and they opposed it. They are condemning thousands of Madrid residents to ruin and destroying Spain’s economic engine.’

It was the second week running that Madrid had requested to move to Phase One. After asking to move to Phase One on Monday 11 May, however, it had provoked controversy, as well as the immediate resignation of the director of public health for the Comunidad de Madrid regional government, Yolanda Fuentes. She had made recommendations that the region should not move at the time.

Fernando Simón explained on Friday evening that whilst Madrid has since made great advances to prepare itself as far as healthcare infrastructure is concerned (in the case of a new wave of infections), the region still has issues detecting less-serious cases of Coronavirus.

The Madrid regional government has also been insinuating that there could now also be ‘social unrest’ if the region’s economy is not restarted soon.

For several days running, small protests have been taking place in some areas of Madrid against the ‘state of alarm’ – specifically in the affluent Barrio de Salamanca of the capital. Groups of protestors have been taking mainly to the street of Núñez de Balboa at around 9pm each evening, banging pots and pans. [See our report of 15 May].

Meanwhile, unlike in Madrid, the regional government in Catalonia itself requested that the city of Barcelona and the adjacent metropolitan areas (both north and south), should not move to Phase One, but instead remain in a sort of ‘Phase O.5’ that allows for certain restrictions to be relaxed. This has been agreed by the Spanish Health Ministry.

Madrid and Barcelona will now both enter a new ‘Phase 0.5’ from Monday 18 May. Details can be found here: Lifting of lockdown in Spain – full details of all phases for all regions.

Spain has extended its ban on entry to the country from outside the EU and the Schengen area. The order goes into effect today, Saturday 16 May, and remains in place until midnight on Monday 15 June.

The measure was initially introduced on 21 March and due to expire on Friday. Spain’s Boletín Oficial del Estado (BOE) confirmed the extension, stating that it is following the EU Commission’s recommendation to do so from 8 May.

All nationals of countries outside the EU or the Schengen Area will not be allowed entry into Spain, except for those having a long-term visa for any of those countries and who are heading to the country that issued the visa. Also exempt are cross-border workers, on-duty health workers and cargo drivers, as well as transport crew, diplomats, and those arguing force majeure.

The regulation does not apply to Andorra and Gibraltar.

The extension also comes after Spain imposed a 14-day quarantine for everyone entering its borders, which came into effect on Friday 15 May. That measure will last until the end of the ‘state of alarm’ (midnight 23 May), or any further extensions of it.

Also on Friday, the official gazette further regulated the entry of all people by plane or boat – restricting it to just five airports and eight ports.

Exceptions to the rule include state aircrafts and vessels sailing for humanitarian purposes.

This order is also in force until midnight 23 May or until the end of any new extensions of the ‘state of alarm’.

State of Alarm to be extended further?

Spain has now completed two months in the ‘state of alarm’ that commenced on 14 March – and it could possibly be extended until towards the end of June.

On Wednesday 6 May, the Spanish Congress voted to extend the ‘state of alarm’ for a fourth time – until 24 May.

Spain extends international ban on entry into country until 15 June