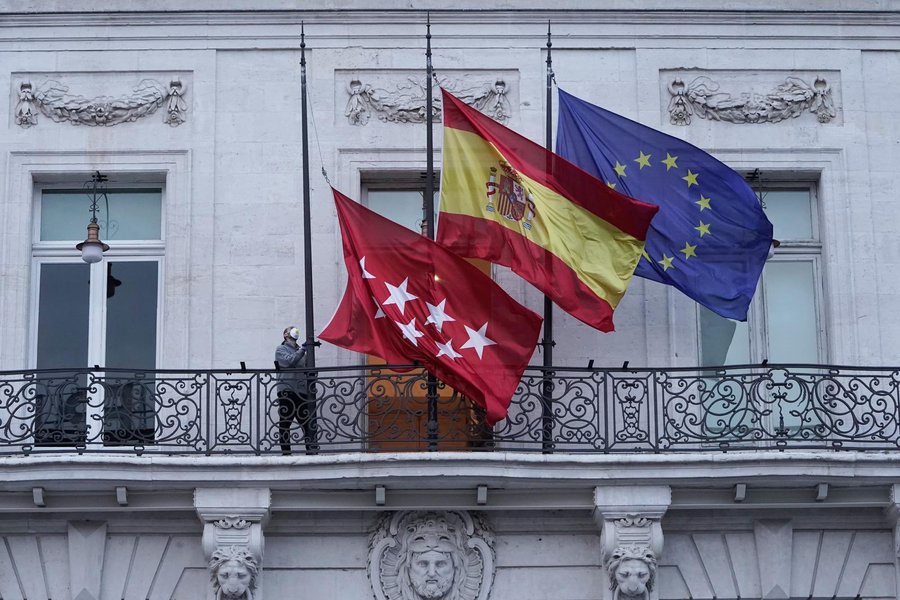 Official figures released by the Spanish Health Ministry at 11.40am on Tuesday 31 March confirmed 94,417 known cases of Coronavirus (Covid-19) in Spain, 9,222 more than yesterday. Today’s rise in total confirmed cases marks an 11% day-on-day increase, compared to an 8.1% and 9% rise over the past two days. The rise in figures could also be due to increased testing.

Of the official figures announced, 27,509 confirmed cases are known to be in the Madrid region, and where 3,603 have died (from the total 8,189 across the country).

Lockdowns to try and stop the Coronavirus (Covid-19) pandemic continue to extend globally, with the death toll in the USA now also over 3,000, with 163,000 known infections. A US military medical ship has arrived in New York to provide a further 1,000 hospital beds and relieve pressure on the city’s healthcare system. A field hospital is also being set up in Manhattan’s Central Park.

The number of confirmed Coronavirus cases around the world has risen above 784,000, with 413,000 of those in Europe.

After weeks of a strict national lockdown in Italy, signs are emerging that the actions taken could finally be slowing the spread of the disease. Whilst the country’s death toll grew by 812 in 24 hours to 11,591, the number of infections climbed just 4.1%.

The lockdowns are causing hardship across the world but also now in impoverished cities in Africa and Asia. Africa’s biggest city, Lagos, started a two-week lockdown from Monday for its 20 million people. Zimbabwe also began enforcing a three-week lockdown.

As reported yesterday, Tuesday is the first full official day where all non-essential workers in Spain must now also remain at home to ease the strain on the country’s healthcare system, and particularly the intensive care facilities.

Confirmed cases of Coronavirus in Spain are ahead of China since the crisis began.

Spain has also currently banned funeral ceremonies, and ordered that no more than three people can attend burials of family or relatives.

With undertakers in Madrid also overwhelmed, the government has authorised the army’s involvement in the collection and transport of bodies for the duration of the state of alarm. A new morgue already opened last week at the Palacio de Hielo (Ice Palace) shopping centre in Madrid.

A second temporary morgue is to be set up in an unused public building near Madrid airport.

As Fernando Simón, director of the Spanish Health Ministry’s Coordination Centre for Health Alerts, has now tested positive for Coronavirus, the spokeswoman for the health department is María José Sierra. During the press conference on Tuesday morning, Simón appeared on video from his home where he is self-isolating.

María José Sierra said that the rate of growth for Coronavirus cases in Spain was slowing down ‘from 20% to 12%’ – and the rise in Tuesday’s data was because it included a ‘weekend cluster’ only reported on Monday night.

‘It’s true that today we have a slight increase in the number of cases,’ said Sierra – but the downward trend ‘is continuing’, she insisted.

Spain is now on day 18 of what will be at least a four-week lockdown, and the country has been seeking to quickly increase the testing. It is currently sourcing testing kits from around the world in order to test 50,000 people per day, up from the current 20,000.

It has also been ordering millions of euros worth of medical supplies to support its healthcare system, on the brink of collapse following the massive influx of patients, as well as a growing number of medical staff testing positive with the virus.

The Spanish government on Tuesday approved a package of economic and social measures to help ease the economic impact of the Coronavirus crisis. The measures were announced at an afternoon press briefing by government spokeswoman María Jesús Montero, promising that the country would overcome the crisis and ‘return to normality on a progressive basis’.

The second deputy prime minister of Spain, Pablo Iglesias, leader of the Podemos group that forms a coalition government with the PSOE socialist party of prime minister Pedro Sánchez, was also present at the press briefing.

Measures announced today include those who are self-employed being allowed to suspend their social security payments for six months, with no interest penalties incurred.

Iglesias announced  a series of measures to help tenants affected by the Coronavirus crisis, which includes a six-month freeze on any evictions for tenants in vulnerable situations.

The new decree also states that tenants of properties belonging to banks, investment funds, or large rental companies could be entitled to up to 50% debt relief, or a restructuring of debt to pay back over three years.

Those renting from small landlords – about 90-95% of the total – will be able to apply for microcredits: very small, commission-free, 0% loans from the public bank, the Official Credit Institute (ICO). These loans will have to be paid back within six years, with the possibility of a four-year extension.

Those who cannot afford to get the microcredit will be entitled to apply for government support towards their rent, for up to 900 euros per month.

Property rental contracts that are due to expire will be extended for six months from the end of the current state of alarm.

The government also approved a wider mortgage holiday for the self-employed who have no income due to the state of alarm. The measure includes delayed payment on mortgages for commercial premises and offices for the self-employed. The government had already offered a mortgage freeze for employees whose income had fallen due to the crisis or if they had been made unemployed.

It was also announced that utilities such as water, electricity and gas would be guaranteed during this crisis period, and that no one in Spain would see any of those services cut off. Further measures approved include new social benefits for anyone who has been left in a vulnerable situation due to losing their job or seeing their income reduced.

Temporary workers whose contracts have been terminated will receive a 440 euro payment, and any house cleaners already signed up to Spain’s social security system ‘would also receive a payment, and cannot be forgotten’ said Pablo Iglesias.

Two of the Catalan leaders who are in prison for their role in the 2017 Catalan independence bid, have called on Spain’s Constitutional Court to suspend the prison sentences they were given.

Former Catalan vice president Oriol Junqueras and former minister Raül Romeva asked the high court for an ‘urgent’ resolution to the case. All of the nine jailed Catalan leaders had already been granted leave before the Coronavirus outbreak – but the confinement restrictions across Spain mean that all prison leave has also been suspended.

Junqueras and Romeva argue that keeping them in prison during the Covid-19 pandemic puts them at risk and ‘seriously affects’ their basic rights. In their appeal, they also argue that given the current state of alarm in Spain, there is no risk of them fleeing abroad.

Another jailed leader, activist Jordi Cuixart, made a similar appeal to the Constitutional Court last week, asking that he be confined to his home as long as the health crisis lasts.

Early on Tuesday afternoon the Spanish Supreme Court issued a brief statement warning that allowing the jailed independence leaders home during the confinement period would constitute the crime of ‘breach of official duty’.