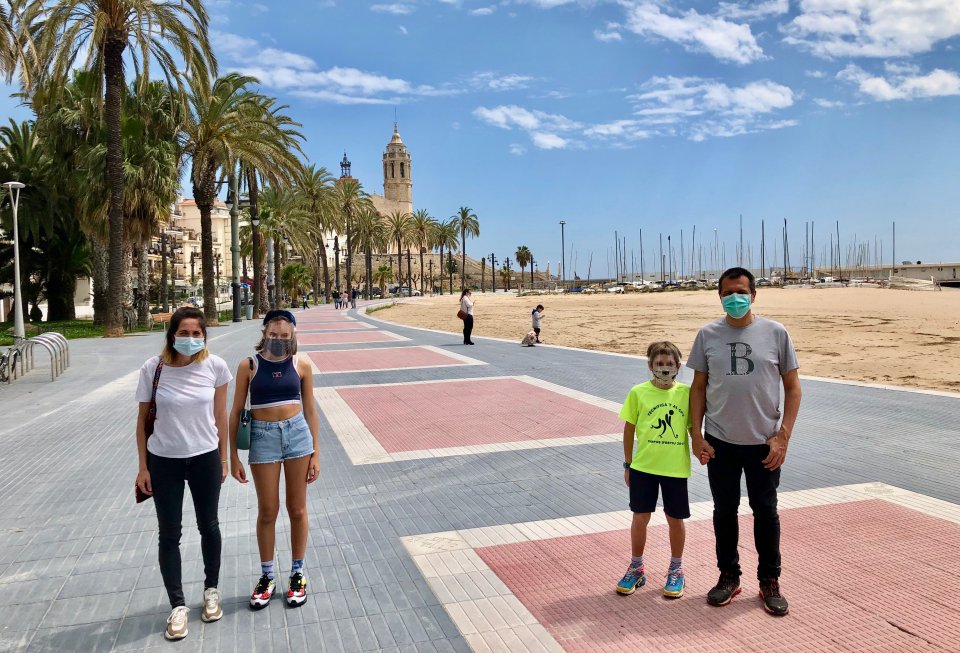 Click here for today’s full report: Coronavirus in Spain (5 May)

Children across Spain could enjoy their first day (or hour) of ‘freedom’ on Sunday, after the country relaxed some of its strict confinement restrictions as part of the current ‘state of alarm’ Coronavirus lockdown.

After 43 days confined at home, children up to the age of 14 were allowed out for an hour accompanied by a parent, guardian or elder sibling, to walk, run, cycle, scooter or play.

Spain is one of the countries that has been hit the hardest by the Coronavirus pandemic, with official figures released on Sunday by the Health Ministry showing that 207,634 people have now been infected with the disease – and that there have been 23,190 Coronavirus-related deaths.

The curve of new infections and deaths has been flattening in Spain, however. On Sunday the country registered its lowest daily increase in deaths (288) since 20 March, according to the ministry’s official data.

In a televised address on Saturday evening, Spanish Prime Minister Pedro Sánchez, leader of the PSOE socialist party, announced that adults in Spain will be able to leave home for individual physical exercise and walks from next Saturday 2 May, ‘if the evolution of the pandemic keeps moving in a positive manner’.

Unlike in most other countries in lockdown, children in Spain have had to stay at home since Saturday 14 March, when the country commenced its lockdown, initially for two weeks.

The measures confined everyone to their homes apart from leaving to purchase food or medicine, or to go to their place of work only if they could not perform their duties from home. After one week, these initial measures were then extended until 12 April, then for a second time until 26 April – and recently until 9 May.

With the lockdown being extended until 9 May, the Spanish government also promised a relaxation of the confinement measures for children from 26 April – although there was an initial public outcry over the precise details of what children would be allowed to do, and with the government forced to make a swift U-turn on the issue.

Last Tuesday evening, Spain’s Health Minister Salvador Illa had to appear before the media to reverse the comments made earlier that day by the government spokeswoman, María Jesús Montero.

Montero had announced during Tuesday that children under the age of 14 would only be allowed to accompany an adult to a supermarket, pharmacy or to a bank – but not for walks in a park or elsewhere.

Many questioned why children should be allowed to enter closed buildings instead of going for walks in the fresh air, or taking exercise or doing activities in open spaces and parks.

On Tuesday evening Illa announced that children would be allowed to accompany adults on walks, and not only to a supermarket, pharmacy or bank.

He acknowledged that the government had ‘listened’ to the criticism received, that had also come from within its own coalition partner, the left-wing Podemos group.

On Sunday, therefore, children across Spain have been taking advantage of their newfound freedom after 43 days in lockdown.

The daily walk is only allowed between 9am to 9pm – and the government has said that ‘peak hours’ should be avoided. The adult accompanying the children must be someone who lives with them – either a parent or guardian, or an elder brother or sister who is over the age of 18.

Children under 14 are not allowed to be outside alone and the daily walks with adults should not be further than one kilometre away from the home.

Children can exercise and run, however, as well as play with balls or use skateboards, scooters, rollerblades and bicycles, but only if they respect the 2 metre social distancing rule with others, as well as remain close to their parents or guardians.

It is not compulsory for children to wear face masks, but it is recommended.

With sports facilities, playgrounds, parks and beaches still closed in most regions of Spain, the ‘neighbourhood walks’ on Sunday have been mainly taken in public open ‘green spaces’, promenades and town squares, as well as community gardens.

‘These supervised outings will have numerous beneficial effects on our children, both physical and emotional, especially in those who live in the most vulnerable households,’ said Illa.

‘Not all homes have the same conditions and not all lifestyles are the same. As a result, this is also an equality measure.’

After this first stage in the relaxation of the lockdown measures for children, prime minister Pedro Sánchez said on Saturday evening that if the Coronavirus toll in Spain continues to fall, then restrictions will also be relaxed next Saturday to allow adults out to exercise alone, and for people living together to be allowed to take short walks together.

‘If we act with prudence,’ said Sánchez, ‘this first relief measure will be followed by another one a week later. If the evolution of the pandemic keeps moving in a positive manner, starting on 2 May outings will be allowed for individual activity and for walks with the people that we live with.’

Click here for all our previous reports on Coronavirus in Spain