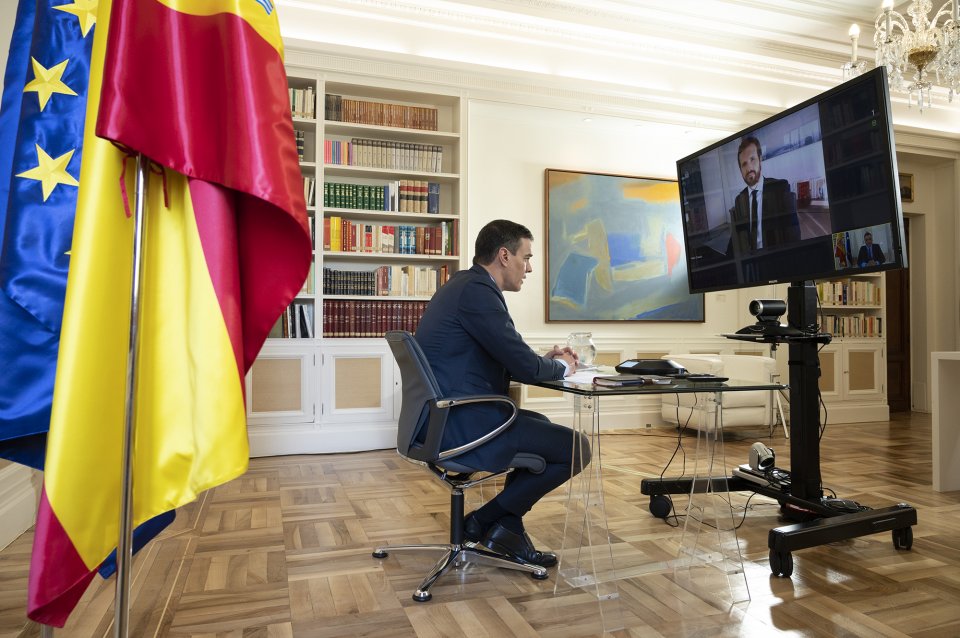 Prime Minister Pedro Sánchez has commenced a round of video meetings with the leaders of Spain’s opposition parties, with the aim of creating a new cross-party ‘Moncloa Pact’ to work together on a social and economic recovery programme for Spain, following the Coronavirus pandemic.

Sánchez intends to hold video meetings with all the political groups that agree to it, as well as meetings with social stakeholders and on-going meetings with the presidents of Spain’s regional governments and the heads of local council authorities.

On Monday he held a video meeting with Pablo Casado, the leader of the opposition and the head of the right-wing People’s Party (PP).

Casado has been very critical of the government’s handling of the crisis. He had previously accused Sánchez of ‘improvising’ and that his handling of the Coronavirus crisis was an ‘explosive cocktail of arrogance, incompetence and lies’. He has since shown at least a willingness to discuss a possible cross-party recovery pact.

In recent days, Sánchez has also held video calls with Inés Arrimadas, the head of the Ciudadanos (Cs) party, as well as with spokespersons from the Catalan Esquerra Republicana (ERC) party, the Basque group EH-Bildu, as well as smaller parties such as Teruel Existe and the Canary Coalition.

Sánchez has insisted that putting the general interest of Spain over party interests would facilitate the implementation of the social and economic reconstruction plan that both the country and the whole eurozone would require, as reflected in the latest forecasts from the International Monetary Fund (IMF) on the magnitude of the crisis.

On Monday morning the Bank of Spain also forecast a collapse of the Spanish economy of up to 13%.

Sánchez has been seeking a ‘de-escalation in political tensions’ in Spain since, according to Moncloa, ‘Covid-19 represents the greatest threat to social well-being and health in a century, a challenge that can only be overcome with the support and talent of everybody involved at national, European and global levels’.

‘I have always said since this crisis began that I have not had, nor will I have, any other enemy except the virus,’ Sánchez has said. ‘Nobody can win this war alone. Only together can we beat the virus and devastation that it threatens to leave in its wake.’

His meetings with the leaders of the opposition are on-going.