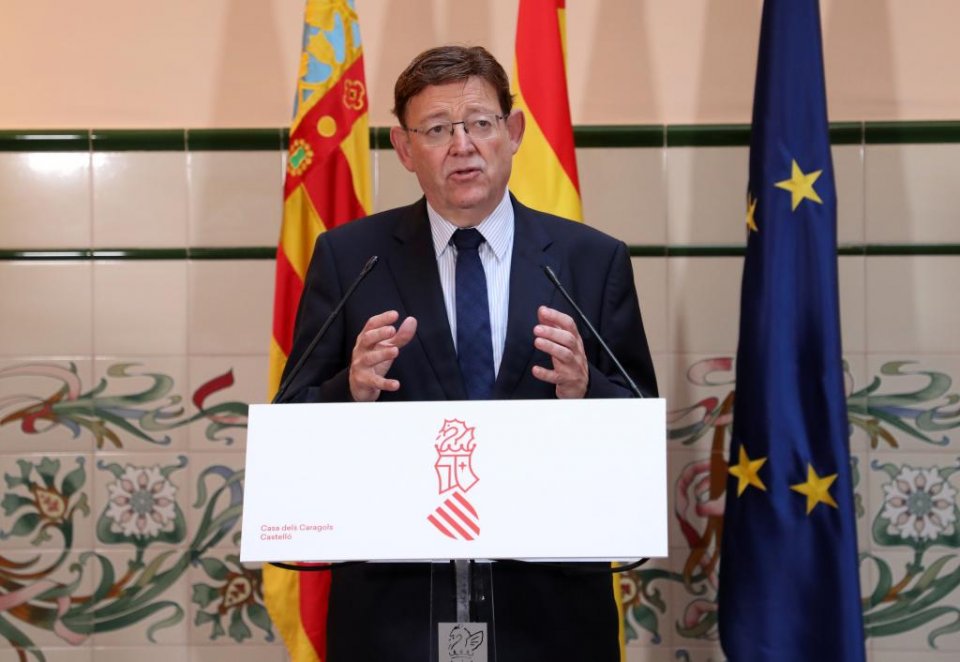 Valencian president Ximo Puig confirmed this week that the perimeter closure of the region would be extended until 9 December. This is the third extension of the measure since it was brought in on 29 October but it seems to be working as Covid-19 infection rates are beginning to stabilise.

Puig also said this week that there would be limits on Christmas gatherings but that nothing could be decided for sure at the moment, and that the situation would have to be evaluated on 9 December. He said this year would not be a normal Christmas, not the sort we are used to. He said the holidays would be different, ‘although the important thing is the sentiment and not the way of expressing it’. He also urged people to bring forward their purchases of Christmas presents to avoid big crowds in shops later on and asked people to support small local businesses when doing their Christmas shopping. [Also read: Barcelona mayor Ada Colau: ‘Don’t buy on Amazon’]

One particularly moving video has been doing the rounds on social media to raise awareness among shoppers to buy locally rather than from large online multinationals.

Valencian health minister Ana Barceló reiterated Puig’s sentiments, looking ahead towards next month. She said that restrictions to mobility and capacity which affect the hospitality industry, ceremonies, public events and gyms, among other venues, will remain in place until 9 December. The towns of Elda and Petrer will also continue with their perimeter lockdown. She said, ‘We must keep up the pressure these days until the measures imposed can be revised on 9 December.’

In her briefing on Tuesday, Barceló said that the exponential growth, which had threatened to get out of control a couple of weeks ago, is slowing little by little. She said that the Valencian region has the best figures in mainland Spain but that they are far from what they would like. She called on people to continue to join forces to flatten the curve, reminding us that face masks are compulsory even in bars and restaurants when we’re not eating or drinking.

This week there have been 10,105 new infections reported in the Valencia region, down on last week’s figure of 11,112. There has been an increase in patients being given the all-clear this week at 10,583, which is up from last week’s 8,348. Deaths, however, have increased slightly from 130 last week to 157 this week.

Hospital admissions have remained the same, with 1,579 being admitted this week, compared to 1,572 last week, although the number of patients needing intensive care treatment has increased from 263 last week to 286 this week.

New outbreaks have decreased slightly from 303 last week to 293 this week, although interestingly those outbreaks caused by socialising have decreased from 214 last week to 180 this week, which would suggest the stricter measures in bars and restaurants plus the midnight curfew are having a positive impact. People are still going to work and school, however, and in those areas there has been a slight increase. There were 72 work-related outbreaks this week, compared to 56 last week, while those outbreaks related to eduction accounted for 41, up from last week’s 33.

The annual Cabalgata de Reyes (the ‘Three Kings parade’) is a big event in any town across Spain on the evening of 5 January. In the city of Valencia, the parade draws in huge crowds, with everyone vying for a place at the front to see the spectacle and catch sweets and other goodies thrown from the floats as they go by. Being tall I usually manage to nab us a ball or two!

Like most events in these times of pandemic, this year’s parade is uncertain. Valencian mayor, Joan Ribó, who supports the parade at any cost, put forward a plan at the beginning of the month to provide numbered seating for members of the public, in specially marked areas. Ribó, who is supported by the city councillor for Innovation, Education, Culture and Sport, Carlos Galiana, said that any event would be carried out within the health limits, but he added: ‘What we can’t do is sit here and do nothing.’

However, councillor for Civil Protection in Valencia, Aarón Cano, is not a fan of the Ribó-Galiana plan and threw the ball into the court of the health minister, saying the decision should be hers. Speaking to Cadena Ser earlier in the week, he gave his reasons for not supporting the parade. He said that the rate of accumulated cases in the city over the past 14 days was 247 per 100,000 inhabitants, which, he believes, is due to the relaxation of restrictions over the summer when we had been at just over 13. In the first 16 days of November, he said, there had been 3,500 cases in the city, the number of outbreaks had doubled, the vast majority due to socialising, and there had been 372 deaths.

While it may seem like Christmas is being cancelled in Valencia, the Benidorm Christmas Dreams series of events was unveiled this week. The programme includes shows for children, theatre plays and live music. The performances, which begin on 5 December, will take place at the outdoor ‘Auditorio Julio Iglesias’ in the Parque de l’Aigüera, with limits on capacity and all the necessary Coronavirus safety measures in place. Organised by Benidorm’s city council and Baltimore Productions, tickets will be at ‘reasonable prices’, varying between €2 and €10 for children’s events. Click here for further details.

Help with residency before Brexit

British citizens in Benidorm are being called to a talk this Thursday (26 November) about obtaining residency ahead of Britain officially leaving the European Union on 1 January 2020. The event, organised by the Department of Foreign Residents, in collaboration with the intercultural association Babelia, will be held at Benidorm’s city council’s Assembly Hall at 10am. Foreign residents’ department head, Ana Pellicer said the talk was to ‘give support to the British living in the city’. Brits make up 4.14% of residents registered, the largest foreign population in the city. There will be a limited capacity at the Assembly Hall and the use of hand gel and face masks will be mandatory.

María Jesús Moreno, who maintained her innocence throughout the trial and Salvador Rodrigo, who admitted to his part in the crime, were also ordered to jointly pay the dead man’s family €250,000 in compensation.

Pedro Sánchez: Spain will have ‘unique’ vaccination strategy at 13,000 locations