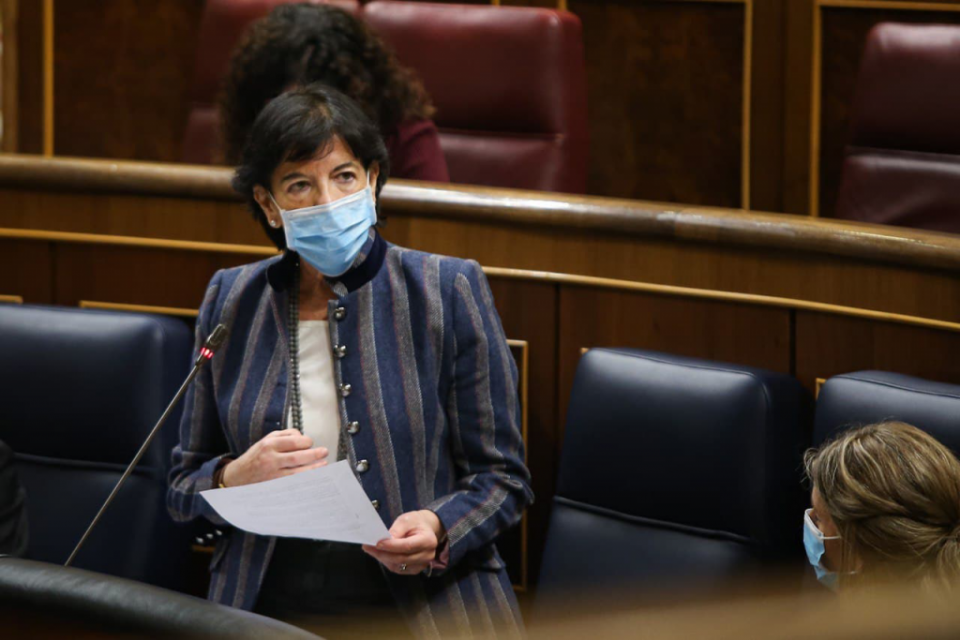 In what is set to be Spain’s eighth educational law in just over four decades of democracy, the LOMLOE (‘Organic Law of Modification of the Organic Law of Education’) was approved by the Spanish Congress on Thursday, following a fierce debate.

Popularly known as ‘Ley Celaá’ – after the current education minister of the socialist PSOE party, Isabel Celaá – the law passed amid a divided parliament and is pending review in the Spanish Senate.

With 177 votes in favour, 148 against and 17 abstentions, the law was backed by PSOE MPs and their partners in the minority coalition government, Podemos, as well as by nationalist and smaller political groups: the Esquerra Republicana (ERC) party, Basque Nationalist Party, Más País, Compromís and Nueva Canarias. The Spanish political left welcomed the new educational policy as ‘modern, equitable and inclusive’.

Strong objection, however, came from the People’s Party (PP), the far-right Vox party, and some members of the Ciudadanos (Cs) party. Speaking for the main opposition party, the PP’s Sandra Moneo said the reform, ‘breaks [Spain’s] system of liberties and the constitutional consensus’.

‘Ley Celaá’ sets forth a series of changes that break from the 2013 educational policy, ‘Ley Wert’, which was passed by a majority PP government and named after the education minister at the time, José Ignacio Wert.

Among some of the main changes is the reduction of school segregation. The law includes measures aimed at ensuring that students from low-income families are equally represented both in public and the semi-private ‘concertada’ schools, the latter of which are attended by almost a quarter of Spanish students. It also outlines that city councils can only cede the use of public land for the construction of public education facilities and not for the construction of concertada schools, which has previously been the case. Further to this, there will be no fee-paying extra-curricular activities allowed within school hours.

Limits will be placed on repeating grades. Just over one third of Spanish 15-year-old students repeat a grade in school, almost double the average number in other developed countries. Under Ley Celaá, a student can only be held back once in primary school and twice during their obligatory years of education. The decision on whether a student must repeat a grade will not depend on whether they have failed more than two subjects, but on what is best for their academic progress.

The law also outlines the promotion of gender equality and schools will be encouraged to highlight the contributions of both men and women, in all areas of study and where they are not usually addressed. Equal representation with regard to the hiring of teachers will also be implemented.

An agenda for sustainable schools outlines the aim for regional governments to reduce the environmental impact of education centres, as well as the creation of ‘safe paths’ to encourage students to walk to school.

New teaching access and increased public spending have also featured in the legislation, giving the government one year to present a system for access to the teaching profession, and for initial and on-going training. A period of two years has been outlined for a plan to increase public spending on education to 5% of GDP. Spending has not been at 5% since 2010, after which it decreased as a result of cuts due to the economic crisis.

Although the new legislation has been in development since May of this year, the governing minority needed support from the nationalist and smaller representation in government to reach an absolute majority (176 of 350 seats) in order to pass the law.

One of the most disputed aspects of the new legislation is the elimination of a passage stating that Castilian Spanish is the ‘vehicular language’ of Spain. For the political right, this is seen to reinforce Catalonia’s ‘linguistic immersion’ model that uses Catalan as the primary language of instruction.

Speaking in defence of the policy, Celaá stated that ‘this is not an elimination of Spanish; it is perfectly safeguarded’ – underlining that all students must achieve proficiency in the Spanish language.

The main opposition parties in government have sworn action in response to the law’s approval. Resistance is also expected from concertada schools, many of which are run by Catholic associations. Some claim that the new law will prevent families being able to choose the kind of education they want for their children.

The government expects the Senate to ratify the law before the end of this year and for the changes in policy to come into effect gradually from March 2021.