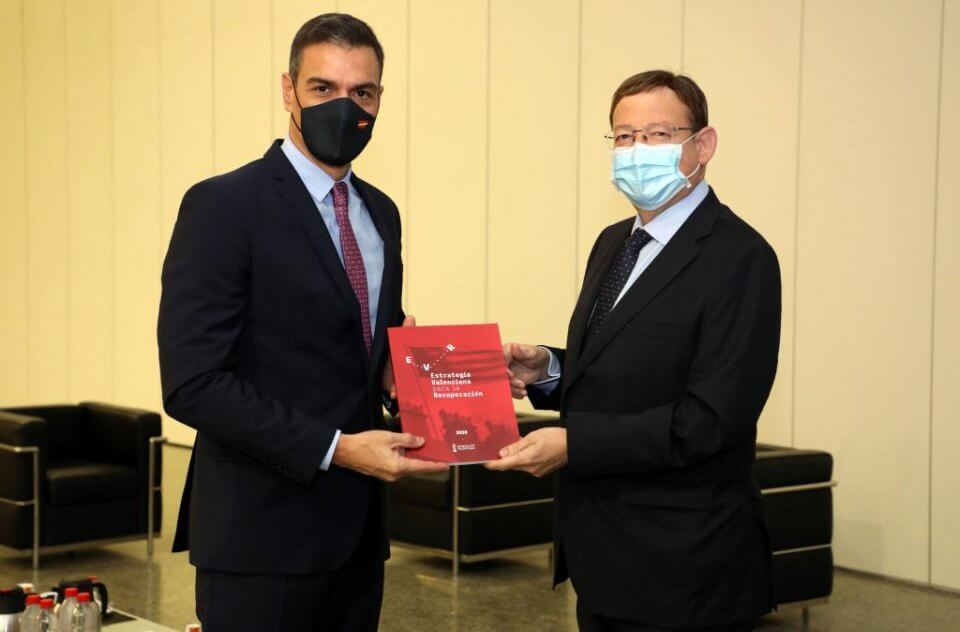 This week Spanish Prime Minister Pedro Sánchez chose Valencia to launch his ‘Recovery, Transition and Resilience Plan’ and kick off his tour of the autonomous regions. The recovery plan is aimed to boost Spain out of the Coronavirus-induced recession. But if Sánchez was hoping for a bit of Valencian sunshine, he was out of luck as he chose one of the wettest days for months.

The event, held at the City of Arts and Sciences on Thursday, was attended by representatives from the business sector and various institutions, and began with a rendition of the European anthem, Beethoven’s Ode to Joy. The choice was quite appropriate given that the 21,000 million euros which Valencia is hoping to obtain, will come from European funding.

Despite both being from the PSOE socialist party, Valencian president Ximo Puig and Sánchez have had their differences in the past. On Thursday, however, the atmosphere was one of collaboration. Puig thanked Sánchez for choosing Valencia to launch his plan and talked of the possible 190,000 jobs which could be created in the region with the funding over the next six years. Puig also called on other regions to assume their ‘responsibilities’ against the second wave of the health pandemic.

Sánchez began his presentation with a nod to the Valencian cinematographer, Luís García Berlanga, whose satirical 1953 film, Bienvenido Mister Marshall, told the story of how a village prepared to welcome some visiting American diplomats, hoping for some American financing. As it turned out the convoy didn’t stop and they didn’t receive the money they’d hoped for.

The film was in fact representing how, after the Second World War, many European countries benefited financially from the Marshall Plan but Spain, under Franco, missed the ‘train’ of progress. Sánchez continued with the metaphor, saying that this time the train is stopping and Spain is getting on board. ‘With a great difference: this time the car doesn’t come from the other side of the Atlantic, instead it’s a car being driven by Europe.’

There were no incidents and no-one was hurt this time. Torrevieja resident, Sacri Delgado, told Valencia in English that she had been woken by the second tremor, but she was pragmatic, having lived in the earthquake area all her life. She said: ‘This was a slow quake, as they usually are, but it’s always a bit scary. I do rememeber one when I was a child where the furniture actually moved.’

One of the most serious quakes to hit Torrevieja was in 1829 when the town and other parts of the Vega Baja area suffered a 6.6 earthquake. The shock, which is etched in the history of the area, left 389 dead and destroyed Torrevieja’s church as well as nearly 3,000 houses in the area.

Having had relatively low Covid-19 infection rates during the summer months, compared to other parts of Spain, cases here are now soaring, week-on-week. This week on average there have been more than 1,000 new cases each day and Saturday saw a new record for the Valencia region, with 2,327 new cases registered in the previous 24 hours.

To cope with the increasing numbers of Covid-19 patients, the regional health department announced on Monday that the former Escuela de Enfermería (School of Nursing) at Valencia’s La Fe hospital would be transformed into a ‘field hospital’ to treat patients with mild symptoms. It will provide a further 166 beds and 173 health professionals to care for patients.

The field hospital will now open in the afternoons to carry out PCR tests. The main aim is to meet the current demand more efficiently. This new slot is directed principally at the education sector, allowing parents to bring their children for tests.

Meanwhile in the Castellón province, work has begun on expanding the current 10-bed intensive care unit at the Hospital de la Plana in Vila-Real. The aim is to allow staff to separate those with Covid-19 from those without. Although some say that beginning the work now, in the middle of the second wave of the Coronavirus pandemic, is a little late, especially when medical staff asked for the work to be done at the beginning of the first wave.

Given the rising numbers of cases, many expected Ximo Puig to announce a stricter lockdown in addition to the midnight-6am curfew which is already in place. However, only a perimeter confinement for the municipalities of Elda and Petrer in the province of Alicante has been imposed for two weeks. Elda has registered 464 infections, while in Petrer there have been 286.

Throughout the rest of the region the new measures, which came in at midnight on Saturday and will last until midnight on 9 December, are aimed at limiting numbers of people rather than curtailing activities all together.

All shops, markets, playgrounds, academies and cultural venues have been limited to 50% of their normal capacity. Restaurants must also be at 50% of capacity for outdoor tables, but that becomes 30% for indoor seating and no buffets or self-service is allowed. Maximum groups of six people are allowed at traditional festivities, playgrounds, public and private social gatherings. Funeral wakes are limited to 25 in the open air and 15 indoors.

Outdoor group exercise is limited to a maximum of 30 people and 20 for indoor activities, as long as social distancing can be maintained, and changing rooms are not permitted to be used. Sports competitions are still to be played without spectators and smoking is not allowed in the street if a 2 metre distance cannot be maintained.

Residents had to be rescued from their homes, crops were destroyed and roads flooded following torrential rains and storms on Thursday.

The rains began in the small hours and continued throughout the day, leading to flooding in many areas as drainage systems struggled to cope with the huge quantities of water.

As barrancos (dry riverbeds) became rivers once again, the water flowed towards the Albufera lake, where the barriers were left open to allow the water out to sea and avoid flooding the surrounding areas.

Valencia city recorded the second heaviest rainfall since 1980 and the old riverbed, which is now a park running through the city centre, was once again filled with water.  Many roads were closed, long diversions were necessary and people driving home on Thursday afternoon described the city’s road system as ‘collapsed’.

In the Valencia province one of the worst hit areas was between Cullera and Sueca, where 360 litres of water per square metre was recorded in 24 hours. Firefighters had to rescue around 20 people from their homes as well as drivers trapped in cars in flooded tunnels.

Alzira was on red alert and the mayor, Diego Gómez, advised residents to move electrical goods to higher floors and take cars out of underground carparks due to the collapse of the town’s drainage system.

Some train lines were also disrupted and Valencia’s Alameda Metro station was forced to close due to the presence of water. To the north, Sagunto port was also closed to maritime traffic because of the high waves.

On Friday, many schools in La Ribera area remained closed, with an estimated 24,000 students enjoying an unexpected long weekend.

In Valencian there is a saying which remains as true today as ever: Plou poc, pero del poc que plou, plou prou. (It doesn’t rain much, but when it rains it really pours).

Spain resists home confinement measures, but will review in ‘2-3 weeks’