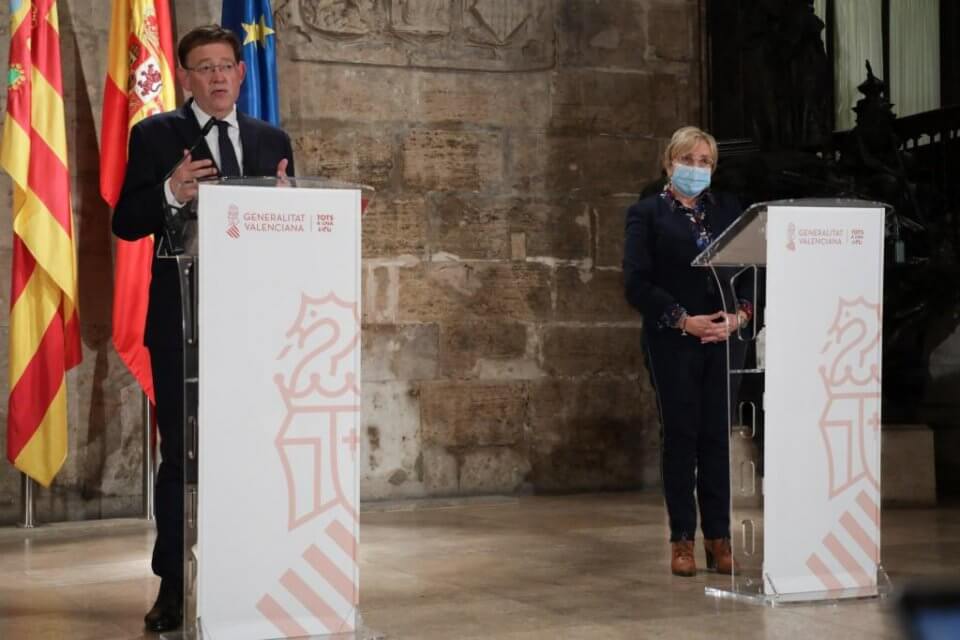 After deliberating for several days, Valencian president Ximo Puig finally took the decision to close the region’s borders on Thursday evening. This means that people can no longer enter or leave the Valencian region unless they have a justified reason. The closing of the perimeter came into force on Friday at noon and will be in place for an initial seven days, although Puig admitted the restrictions could be extended if necessary.

Given the rapid recent increase in infections of Coronavirus in the region, the decision was announced following a meeting with Valencian Health Minister Ana Barceló, late on Thursday. Puig said that we were in a ‘long distance race, not a sprint’, and that ‘there is no law, nor police force more effective than responsibility’.

Puig had been waiting to see the response of the Madrid government before closing the borders, given that this weekend and the next are both puentes (long weekends) in the capital. In the end Madrid’s regional president, Isabel Díaz Ayuso, controversially opted for closing her region’s borders only on the days of the long weekends.

In addition to closing Valencia’s borders, special restrictions have been introduced in 31 towns throughout the region: two in the province of Valencia, four in Castellón and the rest in Alicante. Worst affected is the healthcare zone of Orihuela which encompasses 18 towns. They are all subject to tighter restrictions in an attempt to contain the spread of the virus.

The Ausias March University residence has been quarantined after 72 Covid-19 cases were detected. The nearly 400 students at the residence were told on Saturday to isolate for 10 days. The health department is investigating to try and find the source of the outbreak, which could be related to the use of communal areas.

The residence itself has ruled out any social event as the cause, as these have been banned since the start of term. The authorities in charge of the residence have sent a message of calm to the university community and have suggested that this episode may serve to make students aware ‘of the need to keep to the rules of social distancing and hygiene’.

With social gatherings limited to a maximum of six people, Halloween was quieter than in other years, and while there were no serious incidents, police forces were called to break up various private parties throughout the region and also issued sanctions for breaking the curfew restrictions. Children, who have become used to trick or treating in recent years, had to make do with staying at home and dressing up with their parents.

All Saints’ Day, when many Spanish families traditionally visit the graves of deceased loved ones, has been another area of concern for those in charge. While at one point there had been talk about closing cemeteries all together to avoid overcrowding, in the end strict measures were introduced including compulsory use of face masks, 1.5m distancing, controls on the number of people allowed in and specified one-way systems for moving around cemeteries to avoid people gathering in groups. Many families have also decided to delay their visit and go on a different weekend when hopefully there will be fewer people.

There was also the announcement this week that the Valencia’s Christmas markets would be cancelled as well as the ice rink which attracts many people to Valencia’s Plaza del Ayuntamiento every year.

Falleros were also reminded that they are included in the maximum number of six in any social gathering. While the future of the Fallas Festival 2021 is still uncertain, the groups behind them continue to meet in their casals (social clubs where they hold events throughout the year).

The Radar Covid app is now fully active and Valencians are being encouraged to download it. Using low-power Bluetooth, the app is available for iPhone and Android and lets you know if you have been in close contact with someone who later tests Covid-19 positive.

The jury in the case of the ‘Black Widow of Valencia’ (also see our 18 Oct report) took six hours to reach a unanimous guilty verdict for both Maria Jesús MC, ‘Maje’, and Salvador RL, ‘Salva’, for the murder of Maje’s husband Antonio Navarro in August 2017.

Salva admitted his part in the murder while Maje maintained her innocence. The pair will now be sentenced, and prosecutors are calling for 22 years for Maje and 18 for Salva.