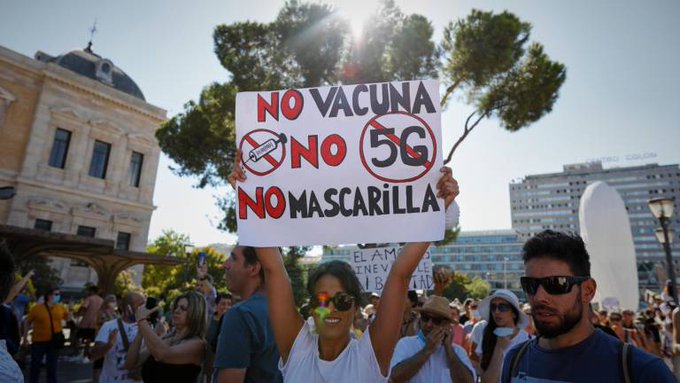 After last Sunday’s demonstration in Madrid against the wearing of face masks, the Spanish government’s delegate for the region vowed there would be fines issued for those in breach of social distancing rules – and for not wearing face masks.

Chanting ‘freedom’, some 2,500 protestors had rallied in the capital’s Plaza Colon against the compulsory use of face masks and other restrictions imposed by the Spanish government to contain the Coronavirus (Covid-19) pandemic.

Protestors had held up placards with slogans such as ‘The virus does not exist’, ‘Masks kill’ and ‘We are not afraid’.

Miguel Bosé, a popular Spanish singer, also supported the protest – after recently promoting conspiracy theories about Coronavirus to his 3m followers on Twitter, claiming that a planned vaccine was a pretext to control the world’s population using 5G mobile phone technology.

Many of the protestors in Madrid last Sunday did not wear face masks even though it is required by law in public across Spain, which has seen a surge in new infections since it lifted its three-month lockdown measures on 21 June and the start of the ‘New Normality’.

‘What happened in the Plaza Colon is absolutely unacceptable and extremely serious,’ the Spanish government’s delegate in Madrid, José Manuel Franco, said during an interview on Cadena SER radio.

Figures released on Friday 21 August showed an increase of 1,199 Coronavirus infections in Madrid in 24 hours, and 20,885 new cases in the past 14 days. As of Friday’s data, there have 102,382 people infected with Coronavirus in Madrid since the start of the pandemic, and 8,537 deaths.

‘We are going to try to identify more people who did not comply with current regulations and what happened will be punished with the utmost rigour. There will be no impunity,’ said José Manuel Franco.

He also said that his office had been deceived on ‘false pretences’ into allowing the demonstration to go ahead, claiming that the organisers had not said the rally was against face masks but about censorship. He claimed that the organisers had also promised social distancing measures would be respected and enforced by volunteers on the day.

Protests had also started in Madrid during and against the ‘state of alarm’ in mid-May, initially centred in the affluent Barrio de Salamanca of the city. Groups of protestors had taken mainly to the street of Núñez de Balboa at around 9pm each evening, banging pots and pans.

The protests then spread to other neighbourhoods of Madrid, and also took place in Málaga and in other areas of Spain.

On 23 May, the far-right Vox party organised a car protest in Madrid against the Spanish government’s handling of the Coronavirus pandemic, as well as the prolonged ‘state of alarm’ in the country.

Backlash in Valencia against nightlife curfews – plus support for tourism

Why would the government, at this time, sanction any protests? They claim the recent one against masks and vaccines that took place in Madrid was due to a misunderstanding about the type of protest that would occur. At this crucial time, there are no “right” protests. The government of Madrid is at fault. They are not sufficiently protecting their citizens.