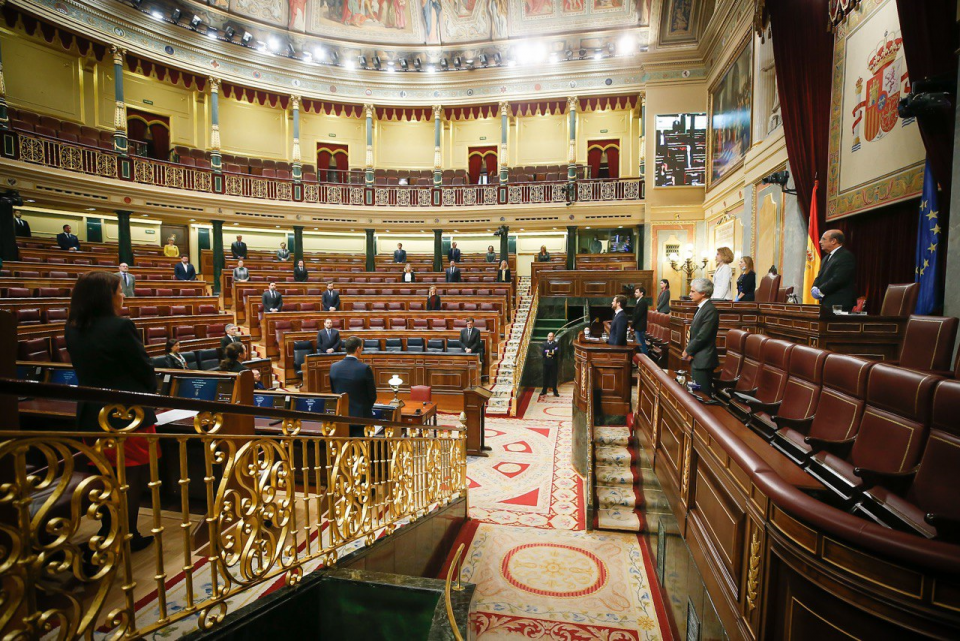 Following a tense debate in the Spanish Congress on Wednesday, the Spanish government has secured authorisation to officially extend the ‘state of alarm’ lockdown in the country until 9 May.

269 MPs voted in favour of the extension, 60 voted against, with 16 abstentions.

Certain restrictions are also to be relaxed from Monday 27 April – specifically for children under the age of 14. Precise details, however, will be announced on Saturday by Spain’s health authorities. By then, most children across Spain would have been confined to their homes for over 40 days.

According to Spanish newspaper El País, the Spanish government is considering a commissioned report from paediatric professionals that includes the recommendation that one parent could be allowed to go out for walks with up to three children at one time, for up to 30 minutes a day and up to a kilometre from home. The new measures would include allowing the children to be able to run and walk in nearby parks and open spaces, yet continuing with social distancing.

Spanish Prime Minister Pedro Sánchez said that life would likely start returning to a ‘new normal’ during the second half of May, during the debate held in the half-empty Congress in Madrid.

‘The second half of May offers the prospect of a scaling-back [of the lockdown] and of phase two of the fight’ when the restrictions ‘will be modified’, he said.

Regarding possible plans during the last two weeks of May to stagger the relaxation of restrictions depending on the situation in each region of Spain, it will be the health ministry that decides upon the extent of the restrictions, as well as where people can go and what they can do.

Sánchez said that his request for authorisation to seek an extension to the lockdown came ‘for the first time’ amidst a ‘positive trend’ in the fight against the Coronavirus (Covid-19) pandemic because ‘we are flattening the contagion curve.’

Figures released by Spain’s Health Ministry on Wednesday confirmed a total of 208,389 known cases of Coronavirus in Spain, 4,211 more than yesterday.

Sánchez warned that the ‘return to the new normal’ in Spain would be ‘slow, gradual and safe’ and carried out with extreme caution. He also said there could be ‘final decisions’ made later on in order to avoid any mistakes.

He said that lockdown measures would be lifted or imposed again ‘depending on how the pandemic behaves in each territory’ of the country.

The socialist PSOE prime minister said that what was needed in this new phase would be for everyone infected with Covid-19 to be identified through testing, with a ‘total control’ over areas with the highest risk of infection, and a ‘system monitoring people from other areas to prevent imported infections’.

The lockdown ‘will not be lifted until we are prepared for it because we are not going to take any risks,’ said Sánchez, insisting that ‘any optimism must be tempered by prudence’.

Relaxation of restrictions for children

During the debate, Pedro Sánchez confirmed that children under the age of 14 would be allowed to go outside every day from Monday 27 April, but that the final details would be announced this coming Saturday. It follows the government having made a U-turn on the issue yesterday.

On Tuesday evening, Spain’s Health Minister Salvador Illa had appeared before the media to reverse the comments made earlier in the day by the government spokeswoman, María Jesús Montero, regarding the relaxing of restrictions for children.

Montero had announced earlier on Tuesday that from Monday 27 April, children under the age of 14 in Spain would only be allowed to accompany an adult to a supermarket, pharmacy or to a bank – but not for walks in a park or elsewhere.

Her comments prompted an immediate outcry on social media in Spain, with many questioning why children should be allowed to enter closed buildings instead of going for walks in the fresh air, or taking exercise or doing activities in open spaces and parks.

At just after 9pm on Tuesday, Health Minister Illa appeared before the media to announce that children under 14 will be allowed to accompany adults on walks, and not only to accompany an adult to a supermarket, pharmacy or bank.

Illa acknowledged that the government had ‘listened’ to the criticism received about the earlier statements given during the day, that had also come from within its own coalition partner, the left-wing Podemos group.

‘This weekend, I will issue an order that will allow children to be able to go for walks,’ said Illa. Further details of how frequent the walks can be and under what ‘conditions’ will be given this coming Saturday.

Sánchez reiterated previous warnings that Spain could only expect to return to normal daily life once the six requirements laid out by the World Health Organization (WHO) have been met.

The key six recommendations from WHO are a controlled transition and the identification of those infected with Coronavirus – as well as the identification of those that they have made contact with; strict controls for areas with a higher risk of infection; preventive measures at work, schools and universities; and for the public to continue to follow hygiene recommendations as well as social distancing.

Coronavirus will change life as we know it, said Sánchez, adding that it will call for ‘new ways of governing’ and ‘new political models’.

Sánchez received some fierce criticism for his government’s handling of the Coronavirus crisis during the debate on Wednesday.

Pablo Casado, the main leader of the opposition and the head of the right-wing People’s Party (PP), demanded that Sánchez should ‘apologise for his mistakes’. He said that the Spanish people were fed up with the government of Sánchez being full of self-pride, ‘incompetence and lies’.

‘Do you think that by not counting the dead [from Coronavirus], that they disappear like when children cover their eyes?’ asked Casado. ‘Why do you hide the deceased? Why don’t you publish the actual figures? Why do you not recognise any of your errors?’

In response, Sánchez said that, ‘of course we have made mistakes, but also some successes.’

Insisting that Sánchez should resign, he said that the government had failed to distribute face masks to citizens correctly but had been very capable ‘trying to muzzle all Spaniards’.

Abascal’s comment was in reference to the fact that the Chief of Staff of Spain’s Guardia Civil police, General José Manuel Santiago, had said the body he oversees is working to ‘minimise the climate against the government’s management of the crisis’ during a press conference on Sunday.

Santiago’s words had drawn a furious response from opposition parties on the right, particularly the PP and Ciudadanos (Cs), as well as the far-right Vox.

Abascal had warned that his party would begin legal action against the general for ‘devoting Guardia Civil resources to “minimize” the climate against the government’s management’.

The PP and Cs opposition parties had called tor the PSOE Interior Minister, Fernando Grande-Marlaska, to give an explanation of the general’s words, which they described as ‘extremely serious and worrying’.

During the debate on Wednesday, Pedro Sánchez also pointed out that Spain, Italy and Greece had not yet fully recovered from the last global economic crisis, and that Europe would be making a mistake if it did not now offer help with the Covid-19 crisis.

He said that Spain would need to rebuild in four areas; health, social care, economic revival and its relationship with the EU.

Sánchez again reiterated his aim to create a new cross-party ‘Moncloa Pact’ to work together on a social and economic recovery programme for Spain, following the pandemic.