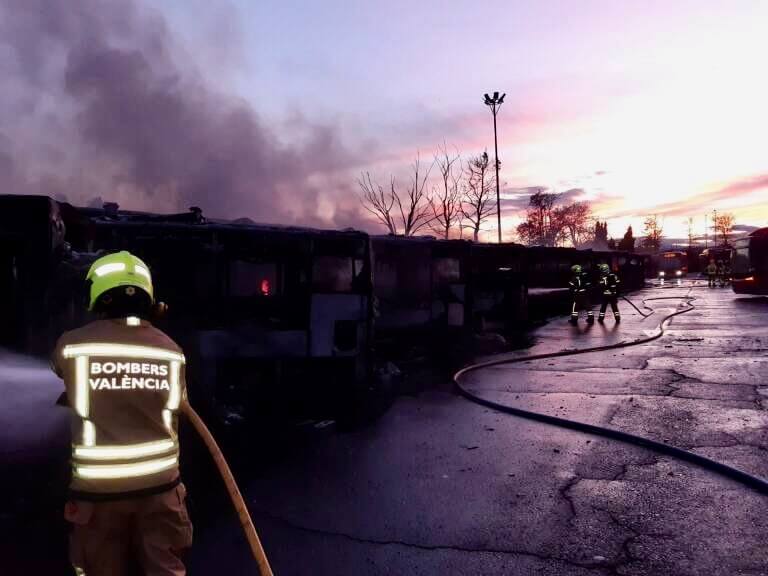 Over 20 buses in depot fire

A total of 23 buses were in flames yesterday [Saturday] in a blaze at the EMT (Empresas Municipal de Transportes) depot in the Sant Isidre neighbourhood of Valencia. Sixteen buses were totally destroyed, one partially burnt and another six damaged by the fire.

The cause of the blaze, which is still unconfirmed, began a little before 5pm but seems to have started when one of the buses exploded and started the fire which then spread to other vehicles. Several firefighting crews, local and national police, as well as a SAMU ambulance attended the scene – although the ambulance was finally not needed as there were no injuries.

By 7pm the fire was under control, although the columns of smoke could be seen from different parts of the city and there were delays on the CV-30 which runs alongside the depot. Valencia Mayor, Joan Ribó, who visited the scene, said that the buses which had been destroyed were old and were to be taken out of service next year.

Alicante received its certification this week from Guinness World Records for the ‘Largest Nativity Scene Figurines’. The statues, which can be seen in the Plaza del Ayuntamiento, have a combined height of 56.02 metres, smashing the record which had been held since 1991 by Monterrey, Mexico, whose staues measured 28.58 metres.

Joseph measures a whopping 18.10m, Mary 17m and baby Jesus 3.25m, although the judges measured not only height but also width and depth to come up with the total. To give an idea, a person measuring around 1.70m (5’ 7”) would only reach Joseph’s ankle.

The certification was given virtually as the Guinness World Records judge, Lena Kulhmann, was unable to travel due to Covid-19 restrictions.

Alicante Mayor, Luis Barcala and deputy mayor, María Carmen Sánchez, discovered the Guinness category and wanted to give a boost to the city’s industry of artesans who make statues for the Hogueras festival which has been particularly hit by the pandemic.

Possible Alliance between Valencia and Catalonia

Valencian President Ximo Puig met Catalan acting president Pere Aragonès in Barcelona this week, to talk about a possible alliance between their two regions and the development of a ‘Mediterranean Commonwealth’.

Puig, who was in Barcelona for a conference, took the iniciative to meet Aragonés and the hour-and-a-half meeting took place on Tuesday.

While the two hold different opinions regarding Catalan independence, they are united in their rejection of what they consider to be ‘fiscal dumping’ by the Madrid region, which uses tax incentives to attract wealthy individuals and businesses at the expense of other parts of the country.

The two men talked about the pandemic, Christmas holidays and the need to maintain all possible precautions. They also discussed the use of European funds and showed their willingness to continue co-operating fluidly between the two regions and to promote their shared interests, as is the case with, among other things, the Mediterranean Corridor (a planned railway along the Mediterranean coast).

Ximo Puig has also called for prudence and maturity ‘to have a different, but responsible Christmas’. He said that controls on people coming in and out of the Valencian region would now remain in place until 15 January, except for the 23, 24, 25 and 31 December and 1 January, to go to gatherings of family or close friends.

These gatherings would be limited to a maximum of 10 people and are recommended not to be from more than two different family units. On the same dates the curfew will be increased to 1.30am. The current limit of six people in social gatherings remains in place at all other times.

November saw a record number of new Coronavirus infections in the Valencia region, since the start of the pandemic, and almost as many deaths as in the previous six months combined.

The figures, calculated by news agency EFE using health department information, show that in November there were 38,669 new cases reported and 1,173 outbreaks, both records for a single month. There were also 537 deaths in a month which saw all indicators rising.

The 537 deaths in November is only surpassed by April which saw 905 and is also very close to the total number of deceased for the months of May to October, which is 580 combined.

There have been 276 new outbreaks, slightly up on last week’s 259, of which 46 were work-related, compared to 37 last week and 27 were related to education, compared to 28 last week. However, far and away the largest area of infections continues to be those related to socialising with 203 outbreaks this week compared to 194 last week.