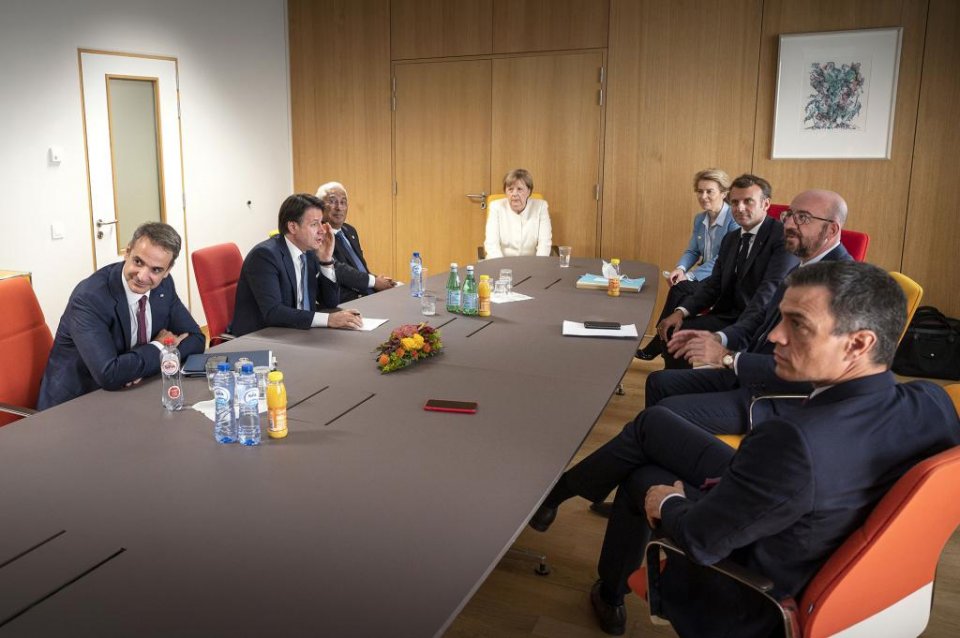 EU leaders concluded a marathon summit in the early hours of Tuesday to reach a ‘historical’ deal for a huge €750 billion recovery plan for their Coronavirus-battered economies – following tense meetings that went through the night and into a fifth day.

Spain will receive close to €140 billion over the next six years from the recovery fund. Spain, whose economy is expected to fall by 10% this year, will receive €72.7 billion in grants and the rest in loans.

President of the European Council and summit chairman Charles Michel tweeted ‘Deal’ shortly after the 27 leaders reached agreement at around 5am. French President Emmanuel Macron also tweeted ‘A historic day for Europe!’ after the deal was reached.

Spanish Prime Minister Pedro Sánchez said that the Recovery Fund agreed was ‘a true Marshall Plan to give a forceful response to the Covid-19 crisis, also focused on the transformations necessary to achieve a more resilient, green, digital and inclusive economy.’

‘We begin the path towards a great modernisation,’ Sánchez said, ‘placing Europe where it deserves: at the forefront, without leaving anyone behind.’

The EU officials also said that the deal, which finally came after Michel presented compromises and amendments on the €750 billion recovery fund, was critical to dispel doubts about the EU bloc’s own future.

The EU institutions, already weakened with Brexit, had been criticised for being too slow in coordinating their initial response to the Coronavirus (Covid-19) pandemic, and the bloc needed to show a united front on economic aid.

‘It has been a long summit and a challenging summit but the prize is worth negotiating for,’ Irish Prime Minister Micheal Martin said at the end of the Brussels summit.

Arriving at the summit last Friday, Spanish Prime Minister Pedro Sánchez had said that EU member states were facing ‘the worst pandemic that humanity has suffered in the last 100 years’.

With people suffering first-hand from the health, and also the social and economic consequences of the pandemic, ‘we are all obliged to reach an agreement’, he declared.

Sánchez insisted that a Recovery Fund needed to transform ‘our economies into much more resilient, more digital, greener and more inclusive economies’.

Michel had originally proposed a €750 billion euro package of EU loans and grants to help member states recover from the Coronavirus recession, but Austria had seen the package as too big and the Netherlands wanted member states to be able to veto national spending plans.

Michel had to find a way to break the logjam after Dutch Prime Minister Mark Rutte and his ‘Frugal Five’ allies blocked the original deal.

On Sunday, Germany’s Chancellor Angela Merkel had warned that EU leaders could fail to reach any agreement. ‘I still can’t say whether a solution will be found,’ she’d said. ‘There is a lot of good will … but it may also be that no result will be achieved.’

Tensions ran high at a dinner on Sunday as the fiscally frugal group of northern nations led by the Netherlands stood their ground on the level of free grants within the proposed special recovery fund of €750 billion overall.

Macron reportedly lost patience in the early hours of Monday, banging his fist on the table in frustration at ‘sterile blockages’ by the ‘frugals’.

Reports state that Polish Prime Minister Mateusz Morawiecki also railed against the ‘frugals’, branding them ‘a group of stingy, egotistic states’ that looked at things through the prism of their own interests.

In the end, Michel proposed that within the €750 billion recovery fund, €390 billion should be non-repayable grants, down from €500 billion originally proposed, and the rest in repayable loans.

Spain will receive close to €140 billion over the next six years from the recovery fund. The amount allocated to Spain equals 11.2% of the country’s gross national product (GDP) in 2019. It makes Spain the second biggest recipient, after Italy.