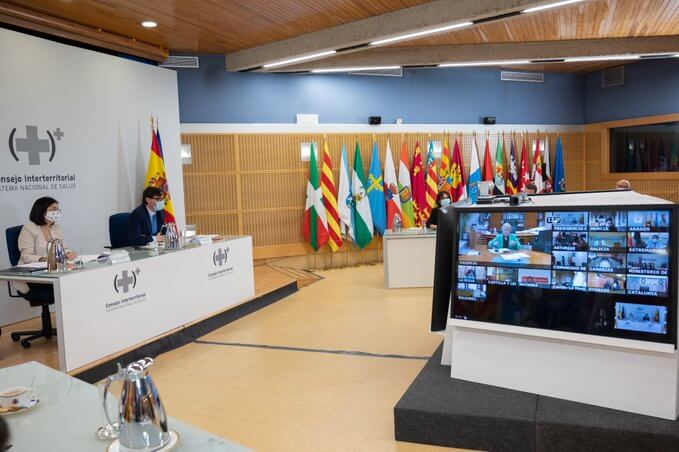 ALSO READ: Details of curfews & restrictions for all regions of Spain during ‘State of Alarm’.

With infections of Coronavirus still rising, Spain’s central government has been under pressure this week to impose new home confinement measures, rather than the regional nighttime curfews and other restrictions that are currently in place under the new State of Alarm.

But at a meeting of the Inter-Territorial Council of the National Health System on Wednesday, Spanish Health Minister Salvador Illa said that ‘two or three weeks’ would be required to see if the current measures in place are having the right effect.

With the latest figures released, Spain has now registered over 1.2 million confirmed cases of Covid-19 since the start of the pandemic, and 38,118 deaths. The pressure on hospitals is also increasing, with nearly a third of all hospital intensive care unit beds occupied by Coronavirus patients across Spain, at 29,11%.

The regional governments of Galicia and Murcia on Wednesday ordered all bars and restaurants to close, a day after Castilla y León took the same step, following the same measures already in place in Catalonia and Navarra. The region of Cantabria, meanwhile, has ordered the closure of indoor bars and restaurants, permitting consumption outside on terraces only. Also read: Details of curfews & restrictions for all regions of Spain during ‘State of Alarm’.

But some regions – particularly Asturias, the Basque Country and Castilla y León – have also been calling for home confinement measures, either at national level or the ability to impose them at regional level. Since Spain entered its New Normality phase from 22 June, responsibility for public healthcare and managing the Coronavirus pandemic has been left mainly in the hands of Spain’s 17 regional governments.

Infections of Coronavirus began to rise after the previous lockdown measures were fully removed from 21 June, however, with the increase blamed on Spain’s rapid return of nightlife, summer vacations and socialising, as well as the lack of an efficient track-and-trace system. Disagreements and legal appeals between the central and regional governments regarding what measures could be imposed, particularly in Madrid, also didn’t help.

The new State of Alarm since 25 October has given regional governments the legal tools to order a shutdown of businesses and impose nighttime curfews, but they can’t impose home confinement measures without permission from central government, which has so far resisted the move. The Spanish government is hoping instead that the new curfews and other restrictions will be enough to slow the rate of infection.

Adrián Barbón, regional president of Asturias, announced on Monday that he had asked for authorisation from Spain’s central government to impose home confinement for residents in the region for 15 days. Alfonso Fernandez Mañueco, president of the regional government of Castilla y León, urged the government to ‘take responsibility’ and ‘declare the measures which the situation requires’, specifically a new lockdown. The Basque Country authorities, meanwhile, called on the government to adapt the current state of alarm to allow home confinements to be introduced ‘if necessary’. Andalusia has also asked for ‘clear and unified criteria’ for a home lockdown.

In response to Monday’s request from Asturias, however, Salvador Illa said that the region must wait to first see if current restrictions are having the right effect.

Illa said the Spanish government was ‘neither working on, nor expecting’ to announce a home confinement order. ‘We think the wide range of measures available to regional authorities is enough,’ he said.

His words were echoed by Spain’s deputy prime minister Carmen Calvo, speaking on Canal Sur radio on Tuesday when asked about the possibility of a new lockdown. ‘We are going to try not to reach that point,’ she said, explaining that the government was still waiting to see the results of ‘the measures taken until now’, such as the nighttime curfew. ‘Give us a bit of time,’ Calvo added.

At a meeting of the Inter-Territorial Council of the National Health System on Wednesday, formed of representatives from Spain’s central Health Ministry and all regional health authorities, Salvador Illa said that ‘two or three weeks’ would be required to see if the current measures have been able to reduce infection rates. ‘We have to be strict and give ourselves enough time for the measures to have an effect,’ he reiterated. It was not clarified, however, from what date the ‘two to three weeks’ commenced.

ALSO READ: Details of curfews & restrictions for all regions of Spain during ‘State of Alarm’.