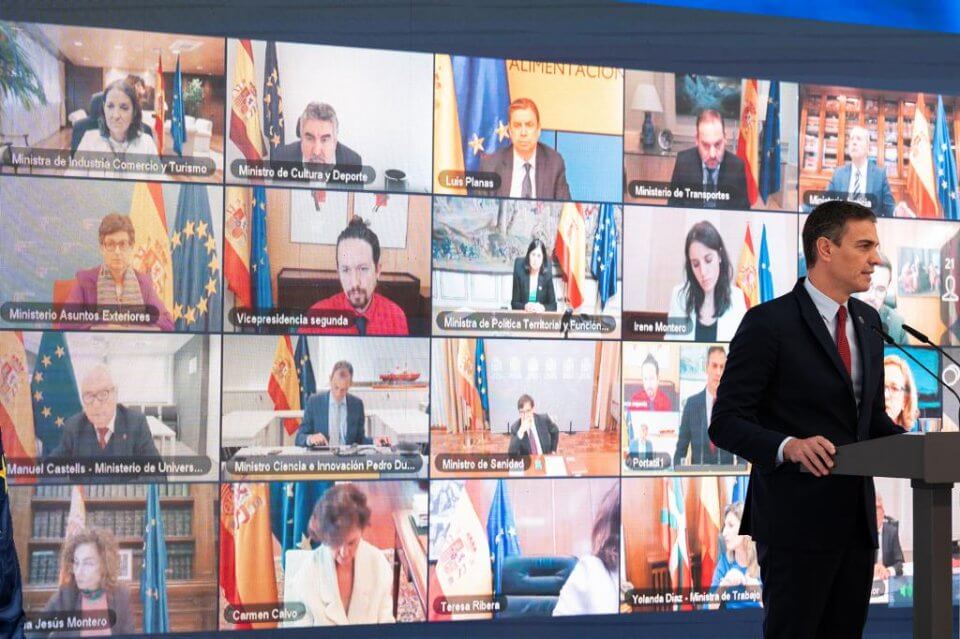 Spanish Prime Minister Pedro Sánchez unveiled ‘The Recovery, Transformation and Resilience Plan of the Spanish Economy’ via video-conference on Wednesday, aimed to boost the country out of recession. The plan aims to spend part of the €140 billion of European Union aid agreed for Spain back in July to help rebuild the economy, with the hope of also creating 800,000 jobs over the next three years.

Of the €140 billion agreed for Spain by the EU, it will receive €72.7 billion in grants and the rest in loans during a six year period.

‘We have to turn this heavy blow into an opportunity,’ Sánchez said, referring to the effects of the Coronavirus (Covid-19) pandemic on Spanish society and its economy. ‘This is the challenge of our generation.’

The presentation was made with an online audience of some 200 business figures, union representatives, as well as the ambassadors of EU states in Spain.

Latest figures published on Tuesday in Spain have shown that there have now been over 825,000 confirmed cases of Coronavirus since the start of the pandemic, and an official total to date of 32,486 deaths. The capital of Madrid, currently in partial lockdown, is experiencing Europe’s worst second wave of infections.

The Recovery, Transformation and Resilience Plan aims to be a financial blueprint for the overall spending of the €140 billion, and will be sent to Brussels in a fortnight. Sánchez, leader of the socialist PSOE party, heads up a coalition government with the left-wing Podemos group. In his presentation, he explained that the investment will be focused on 2020-22, before a next general election is due.

Due to possible delays from Brussels for the arrival of funds, Sánchez also announced that Spain would include €27 billion of the €72 billion that is due to be spent from the fund over three years in this year’s current budget.

Spain plunged into recession in the second quarter when its economy tumbled by 18.5% due to the pandemic, after falling by 5.2% in the first quarter. A recession is commonly defined as two consecutive quarters of a contraction in GDP. Historians claim that only the Spanish Civil War (1936-39) hit the economy harder.

The Recovery, Transformation and Resilience Plan focuses primarily on getting Spain to transition to green energy and a digital economy, which will take up about 70% of the financing.

‘The world has changed and we need to change, too, to safeguard our future,’ Sánchez said.

Sánchez also explained that there would be a commission set up in order to administer the spending of the funds, of which he would preside. It would follow his plans of ‘co-governance’ with the regional governments of Spain, with ‘constant dialogue’ with businesses, society and ‘high-level forums on science, digitalisation, energy, water, mobility, industry, tourism, culture and sports’.

The Spanish government expects the national economy to contract 11.2% this year. In some sectors, such as tourism, the drop could be as much as 25%. Officials expect an unemployment rate of around 17% this year and next.

The PSOE-Podemos government’s strategy aims to reverse the economic decline and achieve growth of 7.2% next year. The government has already been spending four billion euros a month on an ERTE furlough scheme in a bid to avoid massive layoffs, especially in sectors like tourism.