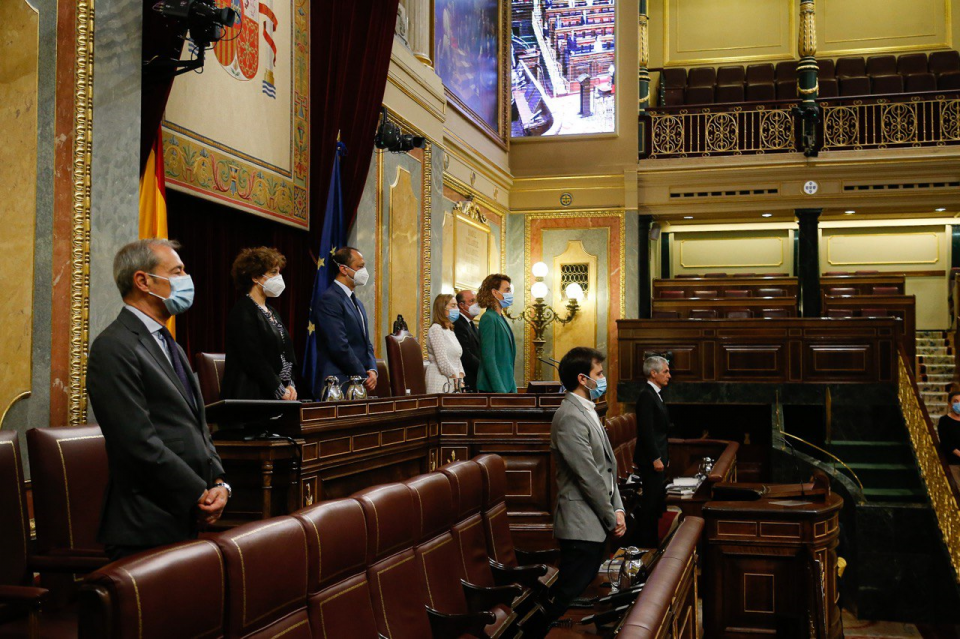 The Spanish Congress has voted to extend the current ‘state of alarm’ in Spain until 7 June. There were 177 votes in favour, 162 against, and 11 abstentions.

It is the fifth time that the ‘state of alarm’ has been extended. It will remain in place as Spain also continues to lift lockdown restrictions with its four-phase de-escalation plan. That plan commenced on 4 May and will continue until towards the end of June, when the country hopes to return to a ‘new normality’.

Socialist (PSOE) Prime Minister Pedro Sánchez had originally wanted to extend the ‘state of alarm’ for ‘one final time’, yet for a whole month, until later in June.

Each time the ‘state of alarm’ had been extended before, it had been for two weeks at a time. Last Saturday, however, Sánchez had announced he would be seeking an extension for a month to last until the end of the de-escalation of lockdown restrictions. The government changed that plan to a two week extension in order to secure the support of the Ciudadanos (Cs) party, led by Inés Arrimadas, as reported yesterday.

In exchange for the Cs party’s support, the government agreed to assess possible de-escalation alternatives that do not require a further period of the ‘state of alarm’ after 7 June.

Each extension of the ‘state of alarm’ requires a vote in the Spanish Congress and just a simple majority – more yes votes than no votes. The Ciudadanos (Cs) party has 10 seats.

The extension passed today with the support of Ciudadanos (Cs) and the Basque Nationalist Party (EAJ-PNV), as well as the Coalición Canaria.

‘The state of alarm and the de-escalation [plans] are working,’ Sánchez said at the start of the debate in the Spanish Congress on Wednesday morning. He also promised that the exceptional measures would ‘not last a day longer than necessary’, but that, ‘no-one has the right to throw away what we have all achieved together’.

Sánchez also apologised to the citizens of Spain for any mistakes made, ‘which were always dictated by the exceptionality of the situation’, he said. ‘Beyond differences of criteria, we have all had to work side by side … but have been united by the same goal: to save lives.’

The Spanish government has received fierce criticism from the opposition for the prolonged ‘state of alarm’ in the country – with Pablo Casado, leader of the right-wing People’s Party (PP), accusing Sánchez of overstepping his powers as prime minister.

Daily figures for Coronavirus in Spain have been improving significantly in recent days – despite a slight increase against the daily downwards trends in the figures released at 5pm today (Wednesday).

The downward trend over the past week possibly illustrates that the gradual relaxing of restrictions from total lockdown to Phase Zero, and now from Zero to Phase One for 70% of the Spanish population, has not had a negative impact on the spread of the virus.

There has also been considerable criticism of the Spanish Health Ministry from the Madrid regional government, for not yet allowing the city to move to Phase One – as well as pressure from other institutions to kickstart the economy and salvage what Spain can of its vital tourist season.

For several days running, small but growing protests have been taking place in some areas of Madrid against the ‘state of alarm’ – and which initially started in the affluent Barrio de Salamanca of the capital. [See our report of 15 May].

‘You have overstepped all boundaries,’ Pablo Casado told Sánchez in the Spanish Congress during Wednesday’s debate. ‘You are simply the government leader with the narrowest support in all democratic history [of Spain].’

In previous debates to extend the ‘state of alarm’, Casado had demanded that Sánchez should apologise for his mistakes, and that the Spanish people were ‘fed up with the government being full of self-pride, incompetence and lies’.

He has also questioned the government’s figures for Coronavirus victims. ‘Do you think that by not counting the dead [from Coronavirus], that they disappear like when children cover their eyes?’ Casado had said in the last debate to extend the lockdown. ‘Why do you hide the deceased? Why don’t you publish the actual figures? Why do you not recognise any of your errors?’

The PP party (with 88 seats in Congress) had already announced ahead of today’s debate that they would be voting against the extension – as did the far-right Vox party, led by Santiago Abascal – with 52 seats in Congress, and Spain’s third largest party.

On Wednesday, Edmundo Bal of the Ciudadanos (Cs) said that Sánchez was making it ‘very hard for us because he is unyielding and unilateral’ and that he had created ‘uncertainty and abused the state of alarm’, but he also said that the Cs party would ‘vote responsibly’ because ‘we cannot take a step back now.’

All three Catalan pro-independence parties – the Esquerra Republicana (ERC) party, Junts per Catalunya (JxCat) and the CUP party – voted against the ‘state of alarm’ extension.

ERC’s leader in Madrid, Gabriel Rufián, said that they had asked for all the key powers to manage the health crisis to be returned to regional governments (the Catalan government included) – but that it had been rejected.

The ERC party was also angry that the Spanish government had negotiated with Ciudadanos (Cs), a resolute unionist party that strongly opposes Catalan independence or any form of referendum.

‘What is being recorded here is not ERC’s rejection of your state of alarm, but once again the government’s refusal to negotiate with ERC,’ Rufián said in the Congress on Wednesday. ‘You have chosen the right [wing].’

(You can click here for all articles and updates related to the Catalan Trial and the Catalan independence bid.)

The ERC party had been key to allowing Pedro Sánchez to be invested again as prime minister at the start of the year, by abstaining in the vote after the PSOE agreed to the creation of a bilateral negotiating table between the Spanish and Catalan governments to ‘overcome the judicialisation’ of the Catalan independence conflict. Talks had commenced between the governments before the outbreak of the Coronavirus pandemic.

ALSO READ: Talks commence between the Spanish and Catalan governments

The Junts per Catalunya (JxCat) party had previously announced they were in talks with the PSOE to strike a deal that would have seen them abstaining in today’s vote in exchange for the Catalan president, Quim Torra, to be recognised as a ‘competent authority’ during the ‘state of alarm’.

For the last vote in Congress on 6 May, the PSOE-Podemos coalition government of Sánchez also had to rely on last minute deals with the Ciudadanos (Cs) party and the Basque Nationalist Party (EAJ-PNV) to secure the fourth extension, which would have expired after midnight on 23 May.

Our previous reports on Coronavirus in Spain