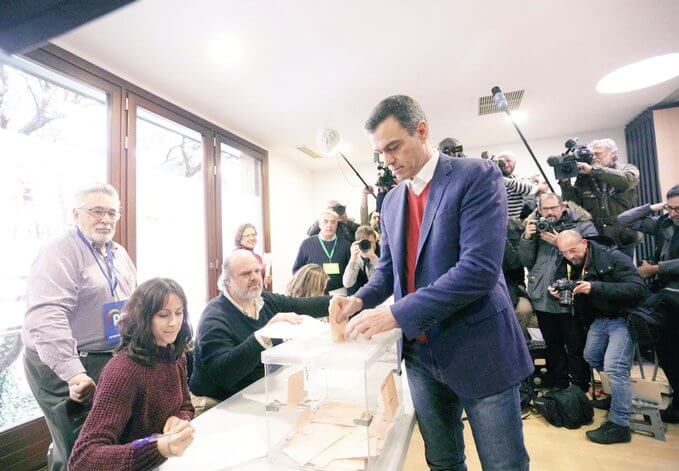 The biggest news of the day, however, was that the far-right Vox party won 52 seats (up from 24 won in April), making it Spain’s third largest party – and that the Ciudadanos (Cs) party was left decimated, winning just 10 seats (down from 57 in April).

The left-wing Podemos party led by Pablo Iglesias won 35 seats, down from 42 in April – due mainly to the new breakaway Más País party, led by Íñigo Errejón, winning 3 seats.

The Junts per Catalunya (JxCat) of former Catalan president Carles Puigdemont has won 8 seats (7 in April) – and the far-left Catalan CUP party has won 2 seats in the Spanish Congress for the first time.

The result means that neither the left-wing bloc nor the right-wing bloc in the Spanish Congress have enough seats to pass the 176-seat threshold required for a majority. It means Sánchez will have to reach agreements with other parties to be invested on the first vote.

The general election  was held amid increased tension surrounding Catalonia‘s independence push, and the rise of the far-right.

Spain had been caught in months of political inertia after an inconclusive April general election, which Pedro Sánchez won but without a majority. Despite a right-wing defeat, Sánchez failed to garner enough support to form a new government – mainly due to his reluctance to agree with the left-wing Podemos party, who are in favour of a referendum in Catalonia and against the imprisonment of independence leaders who backed a unilateral vote in 2017.

Sánchez then called the election on Sunday 10 November in the hope of drawing a line under all the chaos. But in addition to gains by the PP and far-right Vox, the PSOE will again have to depend on other parties – including Podemos and Catalan pro-independence groups – if Sánchez is to stay in power.

After casting his vote in Madrid on Sunday morning, Pedro Sánchez urged Spaniards to head to the polls, saying ‘it is very important that we all participate to strengthen our democracy’ and that the country ‘has the needed stability to be able to form a government’.

The last election produced a near-record 76% turnout, which helped Sánchez who had mobilised left-leaning voters to oppose Vox. The turnout on Sunday looks set to be slightly lower.

Towards the end of this election campaign, Sánchez had also been warning against the Vox party’s ‘aggressive ultra-right-wing’ policies, warning they would drag the country back to the dark days of Franco‘s dictatorship.

Vox‘s rise has seen other right-wing groups relinquishing their ‘conservative’ or ‘centre-right’ credentials, and supporting a controversial motion to ban all independence parties in Madrid’s regional parliament.

The Madrid Assembly passed a non-binding motion last Thursday calling on the Spanish government to ban ‘separatist parties that threaten the unity of the nation with the legal tools at their disposal or those deriving from legal reforms they might have passed.’

In a clear reference to the independence bid organised by the Catalan government in 2017, the motion was put before the assembly for the autonomous community of Madrid by the far-right Vox party, and passed with the votes of the right-wing People’s Party (PP) and Ciudadanos (Cs) parties.

The motion also urged the EU to include the pro-independence Committees in Defense of the Republic (CDRs) protest groups on ‘its list of criminal and terrorist organisations’, and included data from the investigation into seven CDR activists arrested on 23 September.

However on Friday, Pedro Sánchez said that his government would be looking into challenging the motion in Spain’s Constitutional Court: ‘We will study the matter, because we’re beginning to witness some very worrying things,’ he said, calling it a ‘very dangerous drift’.

Polls had been predicting a surge in support for far-right Vox, fuelled by weeks of protests in Catalonia, some violent, after Spain’s Supreme Court jailed nine of their leaders over a failed 2017 independence bid.

Vox won 24 seats in April, out of the Spanish parliament’s 350 seats, in the first significant showing by a far-right faction since Spain’s return to democracy following the death in 1975 of dictator Franco.

Launched in 2014, Vox initially struggled to gain traction with its far-right stance, but in the past two years – mainly due to its unbending opposition to Catalan separatists and its hardline stance on Spanish unity. With 52 seats won on Sunday, they have now become Spain’s third largest party in a very short space of time.

Vox had also come under increasing fire over false claims in its recent campaign, with more than 2,500 academics and researchers releasing a harshly-worded statement on Friday over its ‘calculated, systemic and recurrent’ use of ‘falsified and manipulated data’. The party had also been criticised for banning journalists from certain media from its official events.

The election on Sunday will not stop the political paralysis in the country. With no party still able to secure the required 176 seats for a majority, the PSOE will now finally have to opt to run a minority government, or strike some sort of an agreement with Podemos and the Catalan pro-independence parties. The alternative, of course, is an agreement with the PP – but Sánchez did state that was out of the question during the campaign.

Opinion: Will the Basques be next?