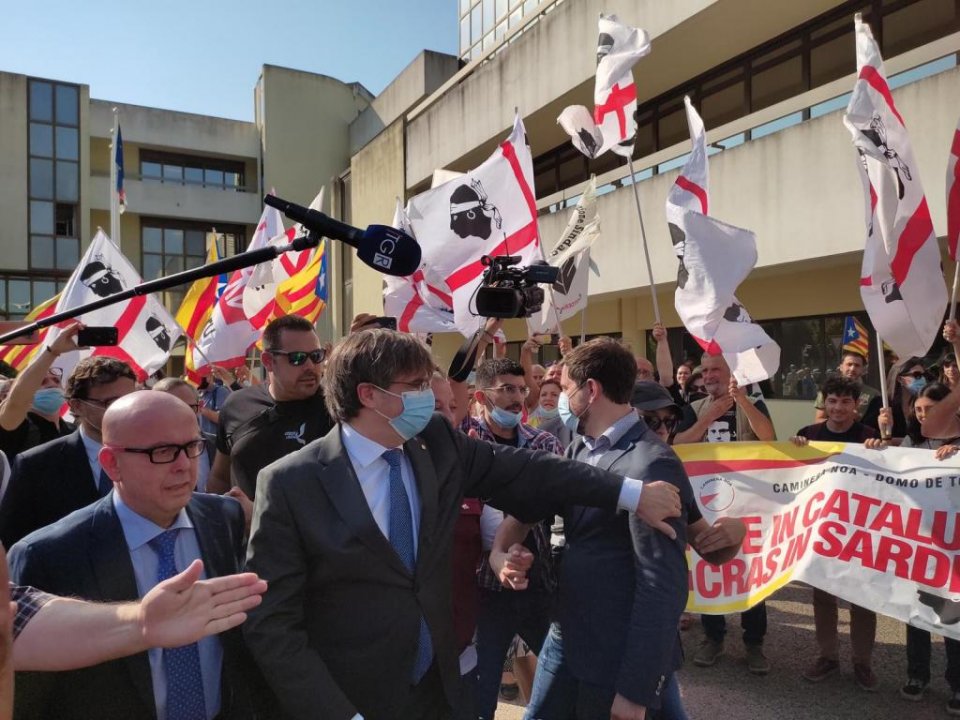 Former Catalan president and MEP Carles Puigdemont was allowed to walk free from a court in Sardinia on Monday, after an Italian judge delayed a decision on Spain’s extradition request, pending rulings from the European Court of Justice. The judge said that Puigdemont was also free to travel.

Puigdemont said he was ‘very happy’ as he left the courtroom. He later participated in the afternoon’s session of the European Parliament by video link from the island of Sardinia.

Puigdemont’s Italian lawyer, Agostinoangelo Marras, said after the hearing that a decision on extradition to Spain, where his client is accused of sedition, is pending decisions on two questions already being considered by European courts. But he said that in the meantime, his client was free to travel as he pleases.

The Italian court first wants to see how the European Union’s general court will rule on Puigdemont’s appeal to the lifting of his immunity as an MEP that the same court confirmed in July. Secondly, the Italian court will wait to see if the European Union Court of Justice rules that the Spanish Supreme Court has the authority to request the extradition of Puigdemont, after a Belgian court said in January that it didn’t when it requested the return of another associate of Puigdemont.

Puigdemont was arrested on 23 September in Sardinia, where he had arrived from his home in Belgium to attend a Catalan cultural festival. Sardinia is an Italian island with strong Catalan cultural roots and its own independence movement. Puigdemont was freed by a judge a day later pending Monday’s extradition hearing. Prior to Monday’s hearing, he had also returned to Belgium.

Puigdemont and fellow Catalan MEPs Clara Ponsatí and Toni Comín had their immunity as European Parliament members lifted earlier this year as requested by Spain after the European Union’s general court said that they didn’t demonstrate they were at risk of being arrested.

Ponsatí and Comín were among a contingent of high-profile Catalan pro-independence figures who travelled to Sardinia to show their support for Puigdemont on Monday, triggering a request sent by a Spanish judge to Italy to have them detained as well. However, there was no indication that they had been taken into custody.

In October 2017 the Catalan government led by Puigdemont staged a referendum banned by Madrid (with Mariano Rajoy Prime Minister at the time) and then issued a short-lived declaration of independence, triggering Spain’s worst political crisis in decades.

Puigdemont, now 58, has successfully avoided extradition since taking up residence in Waterloo, Belgium, following the events in 2017. After a Belgian court declined to send him back in 2017, the following year he was arrested in Germany but a court there also refused to extradite him.

‘We have faced three extradition orders in three different jurisdictions: the Belgian, the German and the Italian,’ Puigdemont said on Monday, after the hearing. ‘It is the moment to tell Spain, “Enough!” that this path does not lead anywhere and does not help solve a political conflict between Catalonia and Spain.’

Nine Catalan politicians and activists were eventually jailed for between 9-13 years by the Spanish Supreme Court in October 2019, convicted of sedition and misuse of funds for their roles in the illegal referendum – with the verdicts causing widespread protests across Catalonia. In June this year, the nine walked free from prison, following the pardons granted by the current PSOE–Podemos coalition government led by Prime Minister Pedro Sánchez.

Coronavirus in Spain (4 Oct) – incidence rate now down to 54