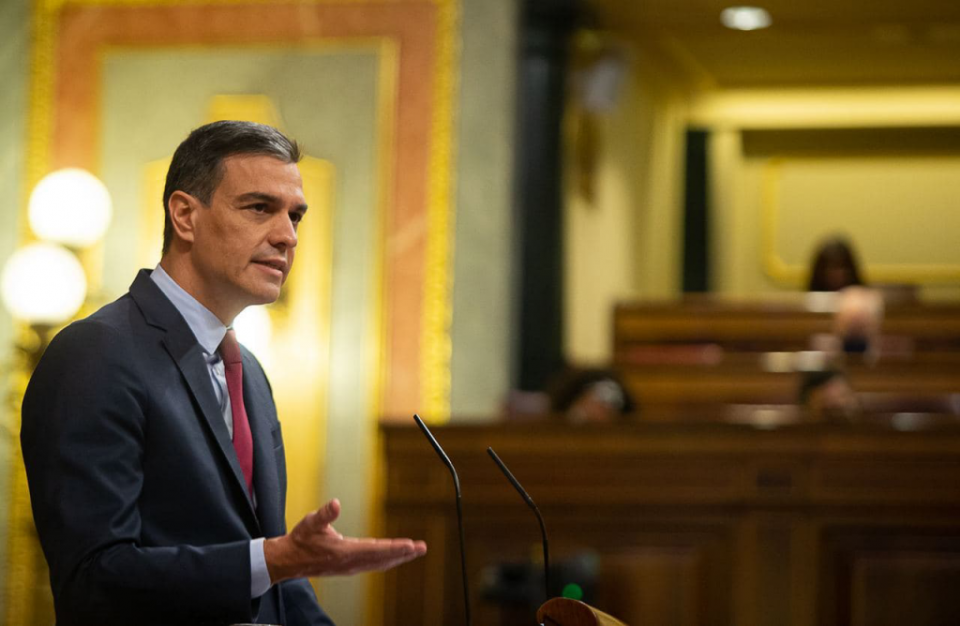 Spanish Prime Minister Pedro Sánchez insisted on Wednesday that there will not be an independence referendum in Catalonia because his socialist PSOE party ‘will never, ever accept it’.

His comments in the Spanish Congress come a day after a meeting he held in Madrid with the Catalan president, Pere Aragonès, and follow last week’s pardons granted to the nine Catalan leaders. The nine had been jailed for between 9-13 years for crimes of sedition and misuse of funds for their roles in the illegal October 2017 independence referendum.

‘There will be no referendum on self-determination unless its advocates manage to convince three fifths of this Chamber to modify the [Spanish] Constitution’s article 2 and Spaniards ratify that amendment through a referendum,’ Sánchez said. ‘I can tell you now, the PSOE will never, ever accept it,’ he added.

The Spanish prime minister also said that the law ‘will be applied whenever necessary’, but that the judicial process ‘is not valid in itself to guarantee co-existence in Catalonia’, calling upon political leaders not to defer their responsibilities to the courts.

Sánchez had met with Pere Aragonès on Tuesday evening in Madrid for their first official meeting, in which they agreed to resume the dialogue over the Catalan political conflict in September.

Before the Covid pandemic, ‘dialogue talks’ had taken place between the Spanish and Catalan governments back in late February 2020, between Sánchez and the previous Catalan president, Quim Torra. Both parties then agreed to shelve the talks during the health crisis.

The concept of the ‘bilateral negotiation table’ dialogue process was a prerequisite for the pro-independence Esquerra Republicana (ERC) party abstaining in the investiture vote for Sánchez to become prime minister in January 2020, thereby facilitating the PSOE leader taking office again.

The meeting between Sánchez and Aragonès on Tuesday lasted two and a half hours at the Moncloa palace, the seat of the Spanish government.

Aragonès repeated his demand for an authorised referendum on Catalan independence, as well as a complete amnesty for all those facing prosecution for their roles in the region’s 2017 referendum, including those in exile. Sánchez had already previously said that a vote on independence by a region of Spain is unconstitutional and that the way forward would be to satisfy the Catalans’ needs by focusing on social and economic issues.

‘The first meeting with Pedro Sánchez has shown how far apart our positions remain and the evident differences that exist to resolving the conflict,’ Aragonès said after the meeting. But he also added that the two leaders agreed that delegations from their respective governments would meet in September to start ‘a new round’ of negotiations.

Government spokeswoman María Jesús Montero said that Sánchez did not address Aragonès’ demands. Instead, she said the prime minister focused on ‘the need to establish a framework of trust’.

‘The government is not naïve and knows that this road is not easy,’ said Montero. ‘It is time to end a chapter of pain and frustration and open a new one for Catalans and the rest of Spaniards that can allow us to resolve this conflict that has festered for far too long.’

Sánchez has made rebuilding bridges with Catalonia a main goal of his left-wing coalition government. While Sánchez has been accused by Spain’s right-wing opposition of appeasing radicals who want to rupture Spain, the dialogue talks also come with political risks for the newly-elected Aragonès. He became the president of Catalonia only in May, and is being pressured to not renounce another unilateral attempt at independence by his coalition partners, the Junts per Catalunya (JxCat) group, still led by former Catalan president Carles Puigdemont, who remains in exile in Belgium.

Despite the recent pardons, Puigdemont and others abroad are still wanted in Spain, and the country’s National Accountability watchdog is demanding former Catalan officials pay back millions of euros that it claims were used to promote the independence movement abroad.

As for Aragonès insistence that Spain stop seeking the extradition of Puigdemont, Montero said that Puigdemont must face the law in order to return home. Catalonia’s independence movement is supported by roughly half the 7.5 million residents in the region.