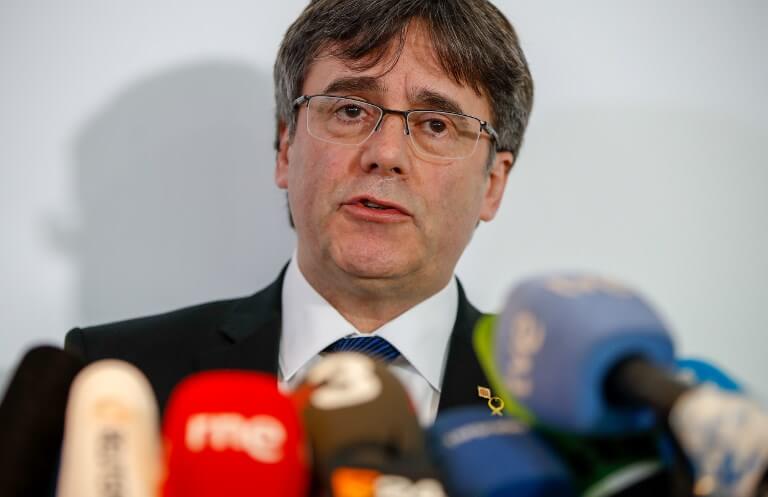 Former Catalan president and MEP Carles Puigdemont, detained by Italian police on his arrival to Sardinia on Thursday evening [see full original report below], was released on Friday without any precautionary measures. He has a first hearing regarding extradition requests from Spain on 4 October in Sardinia, but is free to leave the island and return before that date.

‘Spain never misses an opportunity to make a fool of itself,’ Puigdemont told reporters, immediately following his release.

Puigdemont also told the media on Saturday that he would be leaving for Belgium on Monday, where he lives, although he would then return to Italy for the 4 October court hearing regarding Spain’s extradition request.

‘I plan to return to Brussels on Monday because there is a meeting of the foreign trade committee, of which I am a member,’ he told reporters in the Sardinian city of Alghero.

‘On 4 October I am summoned to Sassari court (in northern Sardinia). I will in fact attend, because every time I have been summoned by the courts, I have presented myself,’ he said.

‘We will continue fighting. We will never give up and I will continue travelling around Europe,’ Puigdemont told the news conference in Alghero, where he was accompanied by the city’s mayor. He also praised Rome for handling his case quickly, after Spain had demanded that Italy extradite him.

‘I am happy with the final result [of being released]. Because our political and legal arguments have been proven,’ he said. ‘The Italian justice took only a few hours to make this decision.’

The immediate legal issue, however, is whether the European arrest warrant issued by Spain for Puigdemont is valid. Puigdemont’s lawyer in Spain, Gonzalo Boye, has insisted the warrant issued in 2019 that provided the basis for the Italian authorities detaining him has been suspended.

The Spanish Supreme Court judge handling the case, Pablo Llarena, sent a letter to the European Union’s Agency for Criminal Justice Cooperation stating that the arrest warrant is ‘in force and pending the capture of those accused of rebellion’.

Ultimately, it will be up to the Italian Justice Ministry to approve or deny extradition.

Italian police transferred Puigdemont to a jail in the city of Sassari on Thursday night after he was detained on an international warrant at Alghero–Fertilia Airport. Alghero, a city on the island’s northwest coast, was hosting a traditional Catalan folklore festival during the weekend that Puigdemont finally managed to attend. Sardinia is an Italian island with strong Catalan cultural roots and its own independence movement.

Spanish Prime Minister Pedro Sánchez said during an official visit to the Canary Islands on Friday that he has ‘respect for all legal procedures opened in Spain, in Europe and, in this case, in Italy’.

Over a thousand Catalan pro-independence supporters gathered as near as they could get to the Italian Consulate in Barcelona during Friday, to voice their anger at the detention of the former Catalan leader. Further protests were planned for Friday evening outside various local councils, with another demonstration planned for Sunday in the centre of Barcelona.

Some demonstrators also gathered outside the courthouse in Sassari on Friday, holding signs in a Sardinian dialect proclaiming, ‘Democracy, the Sardinian nation supports the Catalan nation.’

Former Catalan president and now MEP Carles Puigdemont, who left Spain after the failed independence bid in October 2017, was detained on Thursday in Alghero, Sardinia (Italy), his lawyer said.

Puigdemont, who lives in Belgium and now holds a seat in the European Parliament, has been fighting extradition to Spain, which has accused him and other Catalan independence leaders of sedition.

Puigdemont’s lawyer Gonzalo Boye said his client was detained when he arrived in Sardinia, where he was due to attend a folklore event this weekend, and hold various meetings.

Boye wrote on Twitter that the former president was detained under a 2019 European arrest warrant, even though it had been suspended. Spanish judicial sources have said the EU arrest warrant against Puigdemont is still active, whilst Puigdemont’s defence argues that when Spain’s Supreme Court issued a request on warrants to EU courts in March, the arrest warrant was suspended.

Puigdemont was expected to appear in court on Friday morning at a hearing to consider if he should be extradited to Spain to face sedition charges.

Puigdemont’s chief of staff, Josep Lluis Alay, wrote on Twitter: ‘At his arrival at Alghero airport, he was arrested by Italian police. Tomorrow (Friday), he’ll appear before the judges of the court of appeal of Sassari, who will decide whether to let him go or extradite him.’

Nine Catalan politicians and activists were eventually jailed for between 9-13 years by the Spanish Supreme Court in October 2019, convicted of sedition and misuse of funds for their roles in the illegal referendum – with the verdicts causing widespread protests across Catalonia. In June this year, the nine walked free from prison, following the pardons granted by the current PSOE–Podemos coalition government led by Sánchez.

Spain has previously failed to extradite Puigdemont and on 25 March 2018 the former Catalan president was held in Neumünster jail in Germany, until a court in Schleswig-Holstein rejected extraditing the politician on the Spanish Supreme Court’s charges at the time that included rebellion. Belgium had also previously rejected extradition requests.

Following Thursday’s detention, Madrid expressed ‘its respect for the decisions of the Italian authorities and courts’.

‘The arrest of Mr. Puigdemont corresponds to an on-going judicial procedure that applies to any EU citizen who has to answer to the courts,’ the Spanish government said in a statement. The statement added Puigdemont should ‘submit to the action of justice like any other citizen’.

Current Catalan president Pere Aragonès condemned what he called the ‘persecution’ of Puigdemont. ‘In the face of persecution and judicial repression, the strongest condemnation. It has to stop,’ he wrote on Twitter. He added that ‘self-determination’ was the ‘only solution’.

We will be updating this report during Friday.