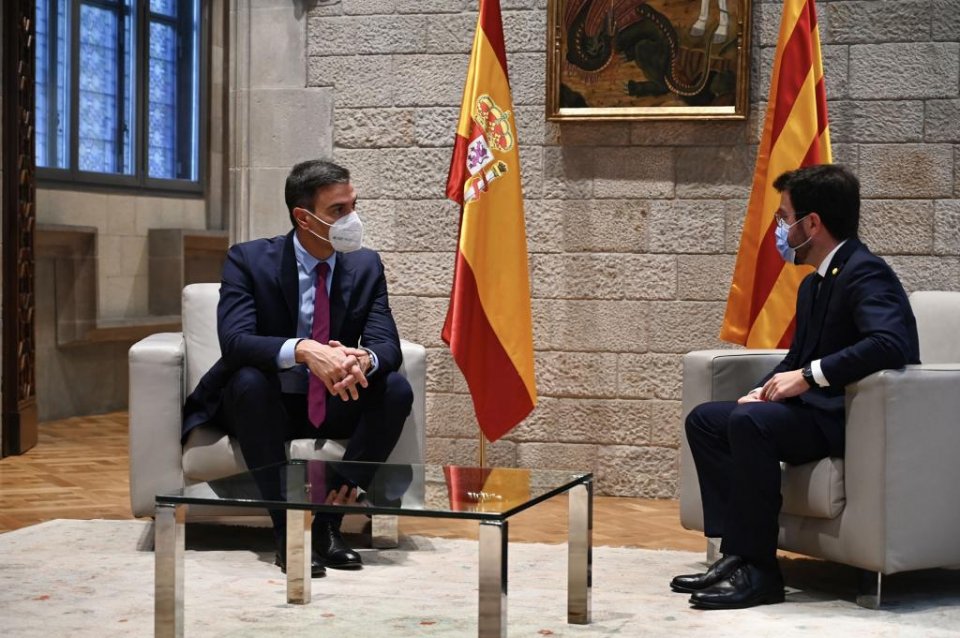 Spanish Prime Minister Pedro Sánchez met with the Catalan President Pere Aragonès in Barcelona on Wednesday – at the start of resuming ‘dialogue’ between the two governments on resolving the Catalan political conflict triggered by the 2017 failed independence bid.

Since the crisis of October 2017, Catalonia has been a dominant theme in Spanish politics and one which Sánchez’s government has vowed to tackle through negotiations.

The concept of the ‘bilateral negotiation table’ dialogue process was a prerequisite for the pro-independence Esquerra Republicana (ERC) party abstaining in the investiture vote for Sánchez to become prime minister in January 2020, thereby facilitating the Socialist (PSOE) leader taking office again.

Initial talks began at the end of February 2020 with the Catalan president at the time, Quim Torra, but were soon suspended as the Covid-19 pandemic took hold.

On Wednesday in Barcelona, Sánchez and Aragonès first held a meeting together, and then both attended the start of talks between their delegations, leaving soon afterwards.

After meeting with Aragonès, the Spanish prime minister said that his position was ‘radically different from that of the Catalan government’, but added that both leaders agreed that dialogue is the way forward.

‘We have decided to continue working together unhurriedly but at a steady pace with no deadlines,’ Sánchez told the press. He confirmed that Aragonès had once again called for a referendum on independence, something that was refused. ‘We live together and need to decide together. Anything that affects Spain must be decided amongst all Spaniards,’ Sánchez told the media.

Nine Catalan politicians and activists were eventually jailed for between 9-13 years by the Spanish Supreme Court in October 2019, convicted of sedition and misuse of funds for their roles in the illegal referendum – with the verdicts causing widespread protests across Catalonia. In June this year, the nine walked free from prison, following the pardons granted by the current PSOE–Podemos coalition government led by Sánchez.

Since the last round of talks, there has been a shake-up within Catalonia’s pro-independence leadership, with the moderate leftist ERC party taking over the Catalan coalition government, led by Aragonès, and with its more hardline counterpart, Junts per Catalunya (JxCat), taking a junior role. JxCat is the party led by Puigdemont, the former Catalan president who was since been elected to the European Parliament while fighting extradition from Belgium to Spain over the 2017 referendum.

Expectations are low for any huge advances from the new talks which have also caused a rift within the pro-independence camp, but Aragonès and his ERC party have called the talks a ‘historic opportunity’.

The Catalan pro-independence parties have two key demands: an amnesty for those involved in the failed independence bid, which would exonerate those who have also moved abroad (including Puigdemont) and a referendum on self-determination, but this time with Madrid’s approval. But the Spanish government is implacably opposed to both.

The Catalan government’s coalition parties, the ERC and JxCat groups, also lack unity on how to possibly achieve a split from Spain. The ERC party favours a negotiated strategy to achieve Catalan independence, whilst JxCat seeks to keep up a confrontational approach. A minor player within the Spanish Congress in Madrid, the ERC party has also offered crucial support to the coalition government of Sánchez.

The issue of dialogue with Madrid has been a huge point of friction in Catalonia, where the population of 7.8 million remain split over the question of independence.

Voters have for several years been roughly equally divided over the independence question, with half in favour and half wanting to remain in Spain.

On Tuesday, Aragonès announced that he was excluding the JxCat group from the talks after it had proposed to include two of its members who had served prison sentences for their role in the illegal referendum four years ago.

Aragonès said the meeting was between the governments of Spain and Catalonia and that members of both delegations should be members of the regional Cabinet and not just representatives of political parties.