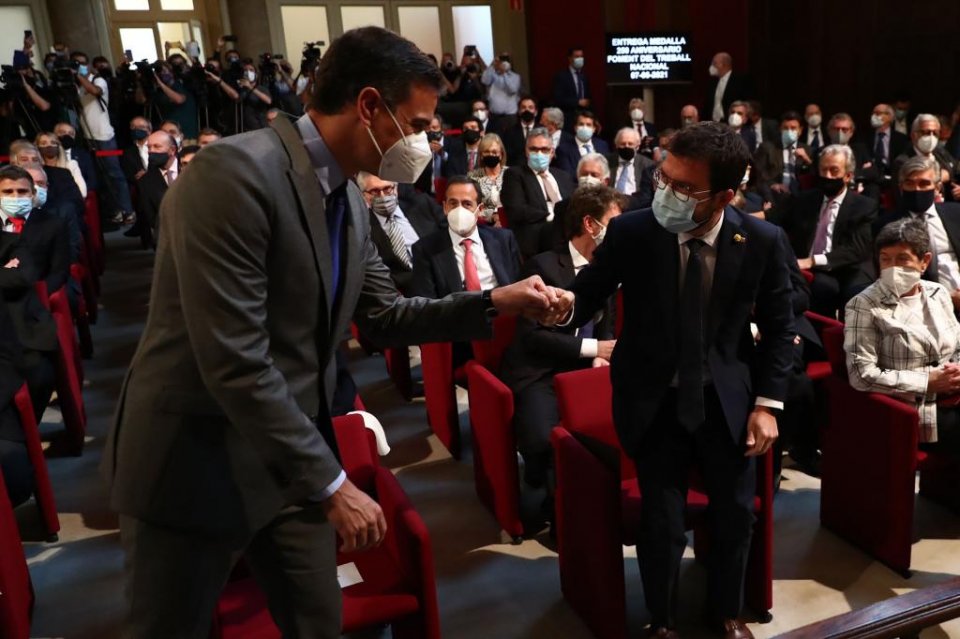 Spanish Prime Minister Pedro Sánchez coincided with the newly-elected Catalan President, Pere Aragonès, at a business forum in Barcelona on Monday, ahead of ‘dialogue’ talks scheduled to be held later in June again to try and resolve the Catalan political conflict. Sánchez took the opportunity in Barcelona on Monday to call for ‘harmony and reunion as weapons of progress’.

Before the Covid pandemic, dialogue talks had taken place between the Spanish and Catalan governments back in late February 2020, between Sánchez and the previous Catalan president, Quim Torra. Both parties then agreed to shelve the talks during the health crisis.

The concept of the ‘bilateral negotiation table’ dialogue process was a prerequisite for the pro-independence Esquerra Republicana (ERC) party abstaining in the investiture vote for Sánchez to become prime minister again in January 2020, thereby facilitating the Socialist (PSOE) leader taking office again.

‘There is a political conflict that needs to be resolved,’ Aragonès had also said during his investiture as Catalan president last month, referring to the situation of the nine Catalan independence leaders in prison. They were jailed for between 9-13 years by Spain’s Supreme Court on 14 October 2019, convicted for crimes of sedition and misuse of funds for their roles in the 1 October 2017 independence referendum.

Sánchez and Aragonès had already talked over the phone last Friday, the first time since the latter took office, in what was later described as a ‘smooth and productive’ 40-minute call.

Both leaders then released a joint statement on Friday afternoon, expressing that they have the shared ‘aim of moving forward towards overcoming the common challenges through dialogue’.

They also both agreed to ‘win the battle against Covid-19 and to work towards economic reconstruction, with a special mention to the Next Generation funds’.

The business forum in Barcelona on Monday was part of a ceremony to present the medal commemorating the 250th anniversary of Foment del Treball to Javier Godó, president of the Godó Group – publishers of La Vanguardia newspaper.

Using his speech in the Catalan capital to call for ‘the recovery of lost co-existence’, Sánchez said, ‘Let us commit ourselves to harmony and reunion as weapons of progress, and let us get to work’.

In front of the Catalan business audience, Sánchez said that the future is at stake, and that the future will come from reunion. ‘And reunion will only be achieved with arguments, and with emotions, which we all have, but with reasons that speak to us of the road ahead together,’ he said.

In his speech, Sánchez said that the time has come to find a solution to problems that compromise our economy and our success as a society, in Spain and in Catalonia. ‘Let us be generous in our efforts, one and all,’ he said.

As a proposal, Sánchez advanced the search for ‘a new us’ as an alternative to the dual dialectic of one and all. ‘Let’s exchange threats for proposals, wherever they come from. And let us not look for justifications or revenge, but for solutions: with pragmatism, with honesty and with common sense. This new “we” will be our greatest success as a society,’ he said.

Sánchez called for the pettiness of partisan interests or electoral calculations to be overcome, to ‘take steps that allow us to move forwards once and for all decisively, calmly and a sense of justice, seeking to benefit citizens as a whole at all times’.

Addressing the forum, he invited Catalan business leaders to enthusiastically join the transformation programme set out in his government’s Recovery, Transformation and Resilience Plan against the economic and social impact of the pandemic.

‘You are indispensable. Catalonia is essential; we need the best version of Catalonia to lead, as it has always done, the economic and social modernisation of Spain,’ said Sánchez.

In his own speech, Aragonès called for ‘a new era of dialogue and negotiation to reach agreements and listen to all proposals’. He added: ‘I want to acknowledge that we’ve taken steps forward and this is important.’