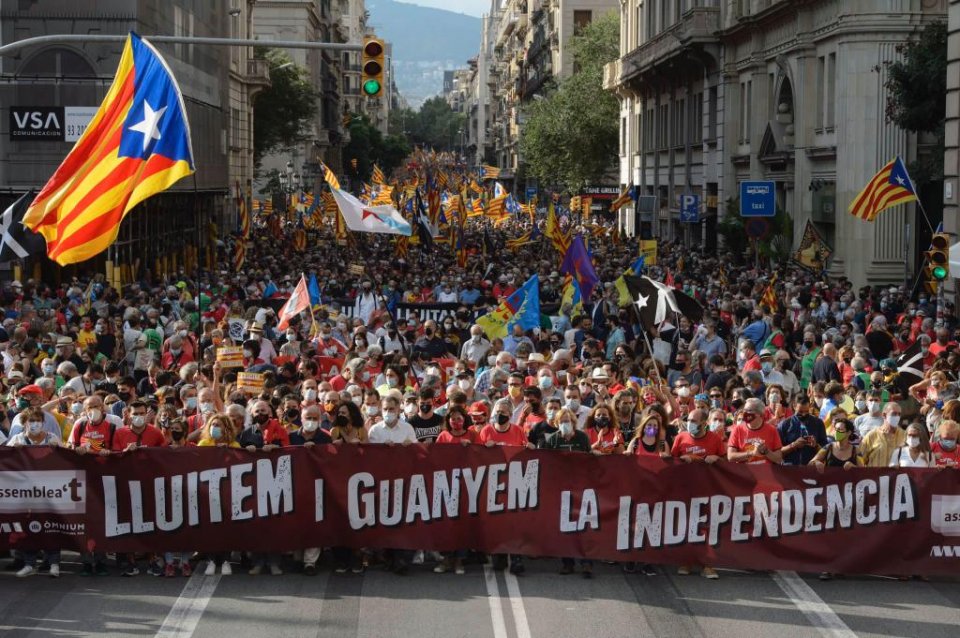 Over 100,000 people took to the streets in Barcelona on Saturday afternoon, marking the 10th year in a row that a huge pro-independence rally has been held on the ‘Diada’, Catalonia’s National Day.

The grassroots group Catalan National Assembly (ANC), the main organisers of the event alongside the civic group Òmnium Cultural, claimed that 400,000 people attended, but Barcelona’s local police estimated the attendance at 108,000. It is the first major rally for the Diada in Barcelona since the start of the pandemic, but the estimated attendance figures are far from the rallies in the mid-2010s, with up to 1.8 million people taking to the streets. For the rally in Barcelona on Saturday, around 200 buses also travelled in from across Catalonia to bring in participants, as in previous years.

This year’s rally comes ahead of upcoming talks between the Spanish and Catalan governments to try and resolve the Catalan political conflict. It is also the first rally since nine Catalan politicians and activists serving jail terms were pardoned in the summer.

The nine had been jailed for between 9-13 years by the Spanish Supreme Court on 14 October 2019, convicted for crimes of sedition and misuse of funds for their roles in the 1 October 2017 Catalan independence referendum. The referendum had been deemed illegal by the Spanish government at the time, led by Mariano Rajoy. The nine had been found guilty following the high-profile Catalan trial – with the verdicts causing widespread protests across Catalonia.

In June the nine politicians and activists walked free from prison, following the pardons granted by the current PSOE–Podemos coalition government led by Pedro Sánchez.

The annual ‘Diada’ on 11 September commemorates the 1714 fall of Barcelona to Spain in the War of the Spanish Succession.

This year’s rally began in Barcelona at 17.14h in the Plaça Urquinaona in central Barcelona, which was the scene of violent clashes between police and rioters following the sentencing in 2019, and it ended at the Estació de França station, near the Catalan Parliament. This year’s rally slogan was: ‘We will fight for independence and win.’

The event ended with leaders of ANC and Òmnium urging the Catalan government to ‘execute independence’. They also criticised the main Catalan coalition government parties, Esquerra Republicana (ERC) and Junts per Catalunya (JxCat), for their lack of unity, and urging them to have ‘shared strategies’ towards a split with Spain.

The moderate left ERC party favours a negotiated strategy to achieve Catalan independence, whilst its more radical junior partner, JxCat, seeks to keep up a confrontational approach. A minor player within the Spanish Congress in Madrid, the ERC party has also offered crucial support to the coalition government of Pedro Sánchez.

When the main rally ended, thousands of pro-independence supporters stayed in Via Laietana, the street in the centre of Barcelona where the Spanish police headquarters are located. Some protestors threw rocks at the police officers guarding the building, and they responded by dispersing the crowd with their batons.

The Catalan pro-independence groups have two key demands: an amnesty for those involved in the failed independence bid, which would exonerate those who have also moved abroad (including former Catalan president Carles Puigdemont) and a referendum on self-determination, but this time with Spain’s approval. But the Madrid central government is implacably opposed to both.

Catalonia’s voters have for several years been roughly equally divided over the independence question, with half in favour and half wanting to remain in Spain.

Over 2,500 evacuated as Spain deploys military against wildfire in Andalusia