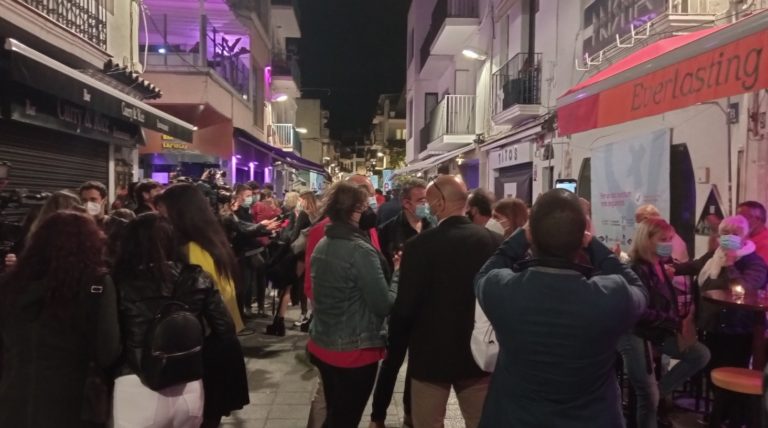 Sitges in Catalonia carried out a nightlife clinical trial on Thursday night, amid great interest and expectations, not just from the 350-plus participants, but from national and international media.

Face masks were the only visible sign of the times as the participants were given free reign to bar hop, dance and drink indoors and outdoors at five music bars. The face masks were mandatory except for when drinking.

Sponsored by the Sitges Town Council and the Catalan health officials, the trial follows two similar tests carried out with concerts in Barcelona, at the Sala Apolo in December with 500 people, and then with 5,000 people at the Palau Sant Jordi in March – with organisers saying there was ‘no sign’ of contagion afterwards.

On Thursday afternoon in Sitges, prior to the nightlife trial, an area had been prepared to carry out antigen tests on the volunteers and workers of the five bars participating. Not one person tested positive.

Organisers have requested that participants respect social distancing for five days after the study to eliminate the risk of contamination. Then another antigen test will reveal whether the event was responsible for any new cases.

‘This clinical study should open the way for the return of nightlife — the only sector that remains completely shut down,’ Catalan regional health official Marc Armengol said.

‘All eyes are on the study that is currently being done in Sitges,’ said Damià Orts, spokesman for the Guild of Hospitality of Sitges (Gremi d’Hostaleria), and owner of Pachito and Everlasting Love, which together with Las Vegas, the Rich Monkey and the Blitz, were the five bars where the clinical study was carried out in the hope that all nightlife bars can shortly re-open.

Orts was visibly emotional when he saw the bars full after many hard, dark months: ‘Last summer we were able to open for a few weeks, in July and August, but due to the strong restrictions there there were few people,’ he said. ‘It’s nice to see people dancing and enjoying a drink. This is a rehearsal for the “before and after”. The final step.’

Around 30 journalists, locked in a cordoned-off area, came from all over the world to receive and interview the participants, who were also surprised by the large number of media.

The faces among the 355 volunteers – the limit was to be 400 but around 50 participants finally opted out – were also of joy. They all passed the antigen test without any problems. As groups of friends had not been allowed out to socialise in these conditions for more than 14 months, many were seen hugging and kissing one other, despite the impediment of the face mask. 80% of those in attendance were from Sitges and the Garraf region.

Sitges Carnival to bring together an estimated 250,000 people during the week