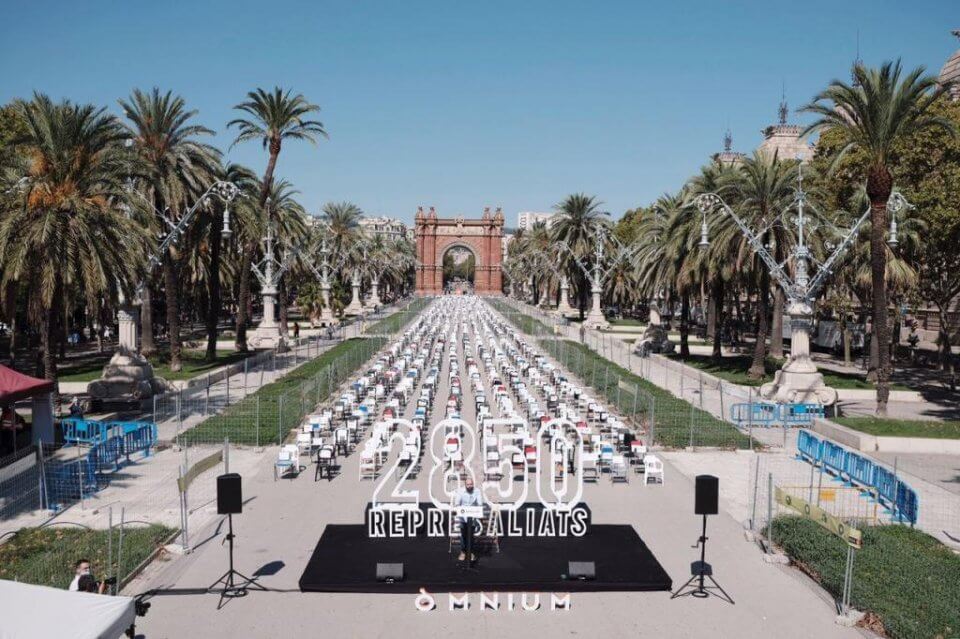 Catalonia commemorates today (11 September) as its National Day – La Diada Nacional de Catalunya – marking the fall of Barcelona in the War of the Spanish Succession of 1714.

In comparison to the previous eight years, however, today’s celebrations have been muted – mainly due to the restrictions and measures in place to stop any further spread of Coronavirus (Covid-19).

Since the end of August, social gatherings of more than 10 people in Catalonia have been banned – and Friday’s Diada comes as Spain struggles to contain a huge surge of Covid-19 infections. On Monday it became the first EU nation to record more than half a million cases.

Since 2012, the Catalan pro-independence movement has previously turned La Diada into a stage for mass rallies, attracting up to 1.8 million people, key in the build up to the 1 October 2017 referendum, which finally put Catalan politicians into an unprecedented clash with Spain – and nine former leaders in jail.

On the eve of this year’s La Diada, Catalan president Quim Torra delivered a televised speech demanding a ‘solemn act of apology’ for the killing of thousands of Catalans during the Franco dictatorship, including the execution of the Catalan president during the Spanish Civil War, Lluís Companys.

Torra went on to say that, ‘We persist in our democratic pursuit of freedom and will continue to do so until we achieve national fulfilment as an independent state. We will pursue this goal with the inclusive and entrepreneurial spirit that defines us.’

This year, however, La Diada has been a low-key event, with no mass gatherings and instead a series of ‘de-centralised celebrations’ organised by various groups – in particular the pro-independence civic organisations, the Catalan National Assembly (ANC) and Òmnium Cultural.

This year’s Diada is also unprecedented as it is the first since last year’s sentencing of the leaders behind the October 2017 referendum. It also takes place in a political climate of disagreement between the pro-independence parties.

Friday began with some acts of sabotage, as a number of trains were briefly stopped due to burning tyres left on the rail tracks, including on an AVE high-speed line to France, according to Spanish rail operator Renfe.

Under the motto ‘The duty to build a better future, the right to be independent’ this year’s de-centralised protests were to be complemented by online activities.

During the day, various Catalan party officials attended a traditional floral tribute to Rafael Casanova, the head councillor of Barcelona when the city fell on 11 September 1714.

Catalonia’s two ruling pro-independence parties, Junts per Catalunya (JxCat) and Esquerra Republicana (ERC), marked the celebrations by pledging unity and making calls to overcome disagreements — at least for the day.

Roger Torrent, the president of the Catalan Parliament and ERC politician, called for commitment to finding a solution to the political conflict between Catalonia and Spain, and demanded that this be the last Diada with pro-independence leaders in jail.

ALSO READ (27/2/20): Talks commence between the Spanish and Catalan governments

Meritxell Budó, spokeswoman of the Catalan government and JxCat politician, said that any political solution to the independence conflict must include an amnesty for jailed leaders and the recognition of Catalonia’s right to self-determination.

Elsa Artadi, also of JxCat, called for unity within the pro-independence groups. ‘When we are strong and united,’ she said, ‘we can continue to move forward to achieve our goal, which is Catalonia’s independence.’

JxCat and ERC have struggled to agree on a common strategy since the October 2017 push to hold a referendum and declare independence.