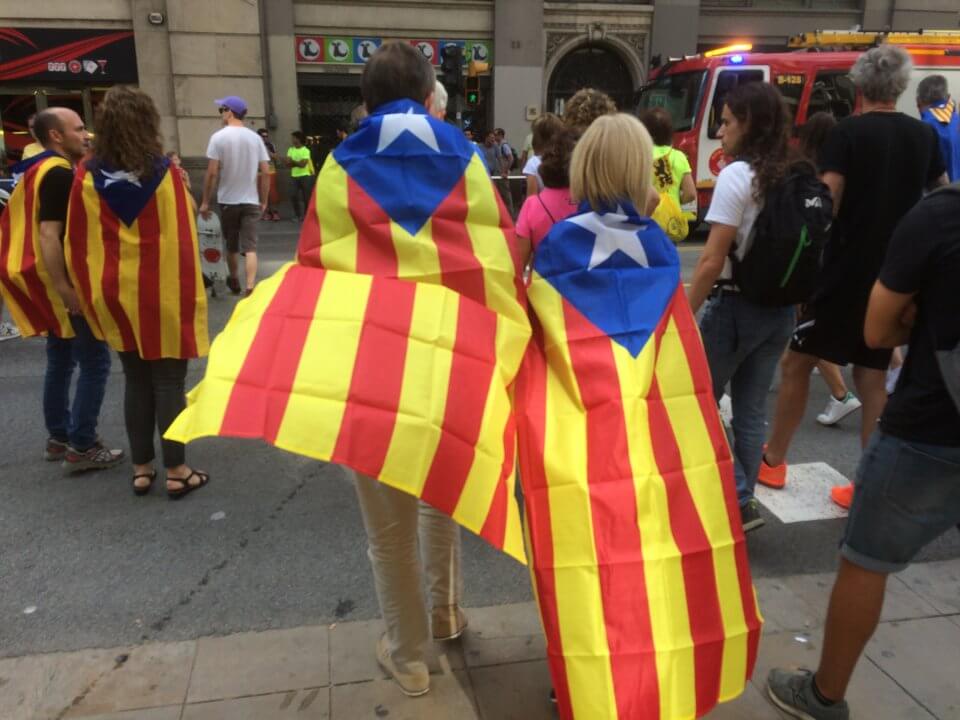 Catalonia’s pro-independence supporters are planning a huge rally this Wednesday 11 September to again coincide with La Diada (Catalonia’s National Day). It will also be a test of strength for the movement just weeks before Spain’s Supreme Court is set to deliver verdicts against the leaders of the failed independence bid in October 2017.

Former Catalan vice-president Oriol Junqueras and eight others face various charges, the most serious of which is rebellion. Public prosecutors have asked that Junqueras spends 25 years behind bars.

In Catalonia 11 September is a public holiday, the Diada Nacional de Catalunya, commemorating the fall of Barcelona to Spain after the Succession War of 1714. For the past 7 years, however, the day has been adopted by pro-independence supporters and who have organised mass rallies.

Each year since 2012, between 800,000 and 1.8m people have taken to the streets, using the bank holiday as a platform for demanding self-determination. However, the mass crowds are not the only thing unique about these protests. Every year is different, and with the verdict of the Catalan trial looming, Catalonia will once again be rather noisy on 11 September.

The first 11 September demonstration was called by the pro-independence Catalan National Assembly (ANC) in 2012. Their motto and objective was simple: ‘Catalonia, new European state’.

There is some debate over how many people actually turned up, in what would become something of a trend in future demonstrations. The organisers claimed that they managed to assemble 2m people, whilst the Spanish government delegation in Catalonia rebuked this, stating that there were 600,000. Meanwhile, the Catalan government and local police found a middle ground, estimating that there were 1.5m people, perhaps a more reliable figure.

The Catalan president at the time and leader of CiU party, Artur Mas, travelled to Madrid after the protests to demand a better fiscal deal for Catalonia from the Spanish prime minister at the time, Mariano Rajoy. Rajoy rejected the requests, and Mas started advocating for Catalonia’s right to self-determination. This marked the beginning of seven years (and who knows how much longer) of talk of independence in Catalonia.

The Catalan National Assembly and Òmnium Cultural organised a rally inspired by that of 1989, when people joined hands across Estonia, Latvia, and Lithuania to protest against the USSR.

Catalan citizens stood similarly together in arms, connecting the Northern and Southern borders of the region. The Camp Nou even opened its doors so that the chain could continue through there. Participants for this year were estimated at 1.6m.

Two months before the non-binding 9 November vote on independence, protesters made it pretty clear what they would be voting for.

Protesters wore yellow and red t-shirts and formed a giant V with the colours of the Catalan flag through two of Barcelona’s major streets, Gran Via and Diagonal.

Figures were estimated at 1.8m for this year, and the figure has not been surpassed since. The culmination of the protests was at 5.14pm, when out of all 1.8m people, one girl put her vote inside a ballot box, placed at the point of the V. The time chosen represented the year 1714, when Catalonia was defeated in the Succession War.

2015: Values of the future Catalan Republic

In 2015, the republic laid out plans for their future. Protestors, this year estimated at 1.4m, carried pointed banners.

Protestors this year spread across five different cities across Catalonia: Berga, Barcelona, Lleida, Salt, and Tarragona. Once again the divide represented different dimensions of Catalonia as an independent state. However, this year the number of protesters more than halved to 800,000.

Less than three weeks before the 1 October referendum on independence, the 11 September 2017 protests were known as the ‘Diada del Sí’ (‘National Day of Yes’), given what protestors hoped the outcome of the referendum would be.

Protestors were brought on buses from all around the region wearing yellow shirts for independence. They held a minute of silence in memory of the victims of the Barcelona and Cambrils terrorist attacks in August of that same year.

This year protestors opted to shape the demonstration at the intersection of major roads, in the shape of a ‘plus’ sign. Giant pro-independence banners were also passed along over the crowds. Crowds for this year were estimated to be at around 1m.

2018: A fight to free political leaders

Last September protestors congregated to demand the release of jailed political leaders, who were charged for calling a referendum and trying to split from Spain in 2017.

The number of protestors was comparable to the previous year, estimated at around 1 million.

This year, protesters were dressed in T-shirts bearing the slogan: ‘We’re making the Catalan republic.’

Much like in 2014, at 5.14pm an act of symbolism was carried out, once again representing the fall of Catalonia in 1714. Total silence fell, followed by a wave of sound that rumbled from one end of Diagonal to the other, where a wall was toppled, representing the direct rule imposed by Madrid (via Article 155) following the independence referendum.

The slogan for this year’s protests is ‘Objective: Independence’, and organisers from the Catalan National Assembly are urging pro-independence political parties and groups to lead with a ‘common objective’.

Once again, protests will be dedicated to the political prisoners and exiles, and this year will take place in Barcelona’s Plaça Espanya, the intersection of a number of Barcelona’s main avenues. According to Catalan National Assembly head Elisenda Paluzie, the square represents ‘a meeting point that is independence.’

State prosecutor: everyone must comply with Catalan verdict – ‘whatever it is’