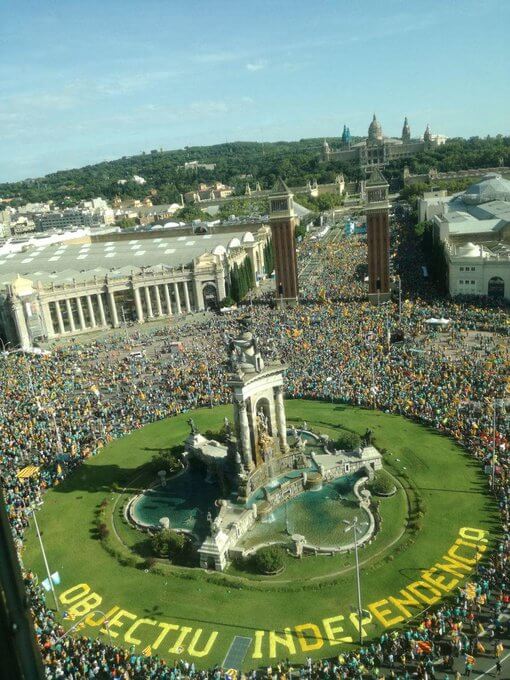 Some 600,000 people, according to figures from Barcelona’s local police (the Guàrdia Urbana), filled central Barcelona around the Plaça d’Espanya on Wednesday evening for the annual pro-independence demonstration coinciding with Catalonia’s National Day (La Diada).

At 3pm on Wednesday, the police began to close some of Barcelona’s main roads as thousands of people began arriving in the Catalan capital for what has become an annual demonstration since 2012 in support of self-determination for Catalonia.

Speaking to the media at the demonstration, Catalan president Quim Torra called it ‘a huge success’ and said it marked the end of an era: ‘Today one era ends and the response to the sentences [of jailed Catalan leaders] begins,’ he said.

Torra was also critical of ‘interested’ commentators who predicted a small turnout for the protest because ‘they did not want it to be a success,’ and pointed to the thousands of demonstrators, saying ‘the people of Catalonia always deliver.’

With the rally’s peak moment at 17.14 – to mark the Succession War of 1714 when Barcelona fell to Spain – the focal point for the demonstration, the Plaça d’Espanya, was full of people in blue t-shirts with the motto: Objectiu independència (Objective independence).

In recent years, at least a million people have come together for the march organised by the Catalan National Assembly (ANC), and with some 450,000 registering before the event estimates suggested there would be a similar number of protestors.

Yet this year’s number is the lowest since the protests began in 2012. The only time numbers fell below a million was in 2016, when 540,000 people came together in Barcelona, but that was a decentralised demonstration, with 875,000 taking part across Catalonia.

During the demonstration at Plaça d’Espanya, flags were unveiled on the Venetian Towers promoting a new platform aimed at ‘organising the response’ to the upcoming verdict of the Catalan Trial.

The platform ‘Democratic Tsunami’ will plan actions to respond to the verdict which is expecting in the coming weeks. The group was formed on 2 September to give a ‘disobedient’ and ‘non-violent’ response to the sentence.

Members of the platform unfolded 11 banners in emblematic places in Lleida, Tarragona, Girona, Badalona, ​​Tortosa, Terrassa, and Barcelona, and 15,000 posters have been put up all over Catalonia.