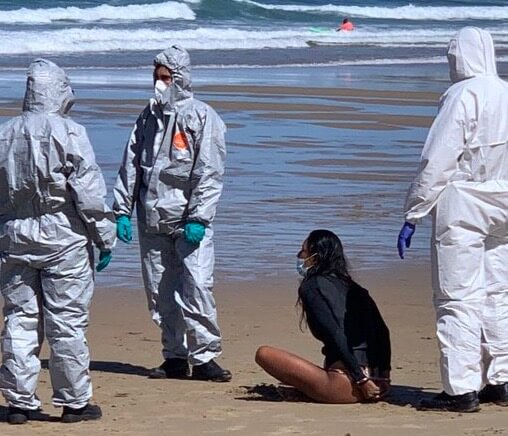 Images of the female surfer arrested on Monday on a beach in the Basque Country have gone viral on social media. Video footage of the arrest of the woman, who had tested positive with Coronavirus and was supposed to be in self-quarantine at home, also hit global news networks.

The arrest took place at La Zurriola beach in San Sebastian, in the Basque Country. She was eventually handcuffed by officers from the Basque regional police force, the Ertzaintza, before being led away from the beach by officials in full protective gear.

The woman, who has not been named, was arrested for the alleged crime of disobedience after reportedly ignoring the officers who had ordered her out of the water. She is also expected to face a fine for breaching Spain’s strict quarantine rules.

According to reports, the woman is a lifeguard and the police were tipped off by her own colleagues who knew she was meant to be in self-isolation.

After confirming that the woman had tested positive for Coronavirus, police officers went down to the beach to order her out of the water. When she refused to stop surfing and then tried to run away from the officers, she was arrested for disobeying the authorities and for alleged crimes against public health.

Video footage of the incident can be seen via the Tweet below: