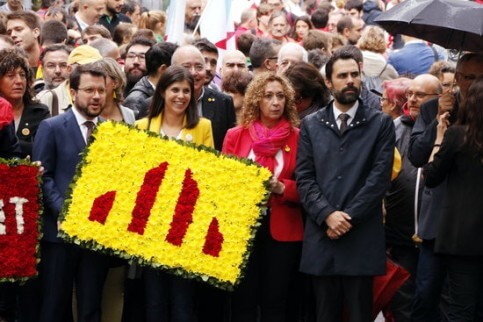 As Catalonia’s National Day (La Diada) got underway on Wednesday, leading political figures in the pro-independence movement took advantage to restate their determination to see through their objectives in the ongoing political conflict with Madrid.

From exile in Belgium, former Catalan president Carles Puigdemont tweeted: ‘Today we will once again show the world that we persist despite the repression, that we have a right to live freely and in peace, and that no one can decide our future for us.’

On Tuesday evening, the current Catalan president, Quim Torra, used his customary speech on the eve of La Diada to insist that calling an independence referendum would be the only way out of the Catalan crisis. The head of the Catalan government said that ‘exercising the right to self-determination, a right that belongs exclusively to the peoples’ must be the way to know whether citizens want to be part of a state. ‘And they have the entire right to exercise it.’

He also implicitly referred to Spain’s response to the independence push, including the imprisonment of politicians: ‘Democracy, today in our country under a long and pathetic siege, is and always will be the response of Catalans. And this is the response we demand to everyone.’

On Wednesday, Catalan Parliament speaker, Roger Torrent, also said that the majority in favour of independence will use 11 September to show ‘they do not want repression’, and he predicted a National Day that ‘will once again be civic, peaceful and democratic.’

Barcelona mayor, Ada Colau, referred to the ‘absent voices’ of the jailed leaders awaiting the verdict from the Catalan trial, warning that it ‘does not help, but makes a solution to the conflict more distant’, and she added that she was ‘delighted’ that the city should host this evening’s mass protest.

The Catalan government foreign minister Alfred Bosch expected today’s pro-independence march to be a ‘massive’ claim for the right to self-determination.

The Esquerra Republicana (ERC) party spokeswoman, Marta Vilalta, regretted that the National Day should be celebrated in a situation of ‘repression, political prisoners and exiles’, and she called on the public to take to the streets to send the message ‘that democracy has no limits’.

Junts per Catalunya (JxCat) party MP, Albert Batet, insisted that the ‘repression’ by Spain is not winning and he added that if the authorities in Madrid prioritise it over democracy and dialogue it will mean that Spain will have ‘failed’ as a state.

Meanwhile, Jéssica Albiach, the parliamentary head of the CatECP party, which does not back outright independence but is in favour of a binding referendum, warned that normality ‘will not be possible’ without freeing the Catalan leaders in prison.

Some 450,000 people have registered for the Diada rally and over 1,200 buses had been reserved by the organisers, the Catalan National Assembly (ANC), to bring people to the Catalan capital to take part in the march that aims to fill some of the city’s main thoroughfares with a sea of protestors.

Under the motto Objectiu independència (Objective independence), this year’s demonstration comes with the Supreme Court’s verdict in the trial of jailed Catalan politicians and activists due out in the next few weeks.

Aware that international media will be watching, for this year’s march the ANC is aiming for the people taking part to form a huge star shape that will be visible from the air, and converging on Espanya square.

Barcelona will see mobility severely reduced in the city due to the celebration of the rally, although underground metro services and commuter trains are expected to operate with more frequency.