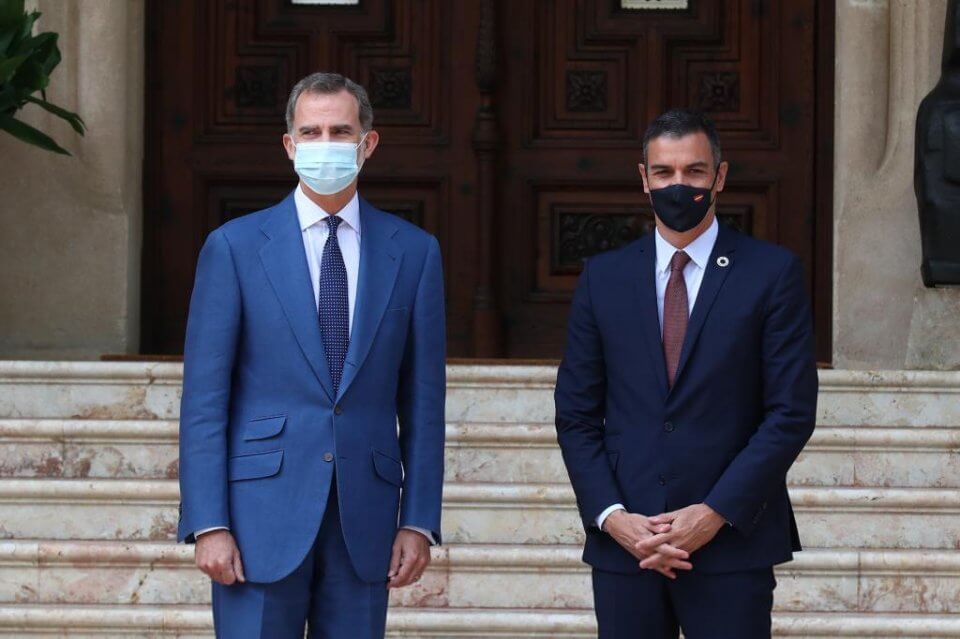 Spanish Prime Minister Pedro Sánchez avoided even mentioning the name of the former king of Spain, Juan Carlos I, when he appeared briefly in front of the media after a meeting with current king Felipe VI on Wednesday in Mallorca.

It was their first official meeting since the news last Tuesday that Juan Carlos had ‘fled Spain’, following on-going investigations concerning corruption scandals.

Since his departure from Spain, conflicting media reports have claimed that the former king travelled first to Portugal before heading to Abu Dhabi – with others stating that he will finally establish his place of residence in the Dominican Republic. It has even been reported that he could be heading to New Zealand.

The traditional summer meeting between Spain’s head of state and the prime minister took place at the Palacio de Marivent in Palma de Mallorca – the summer residence of the royal family. Felipe VI is currently there on vacation. Sánchez is officially on vacation on the island of Lanzarote in the Canary Islands.

The meeting was essentially to update Felipe VI about the current situation of Coronavirus (Covid-19) in Spain, as well as the social and economic emergencies derived from the pandemic.

In a brief appearance in front of the media after his meeting with Felipe VI, Sánchez said that Spain needs ‘institutional stability’.

When pushed on the whereabouts of Juan Carlos I, Sánchez simply said that any communications on the issue were ‘a matter for the royal household or affected party and not the government’. He also reiterated that his conversations with the head of state remained confidential.

Spain’s royal household maintains that Juan Carlos I is a private citizen and that he will reveal where he is when he deems it appropriate, if he considers it necessary. Meanwhile Juan Carlos I retains the honorary title of king of Spain, and is travelling with a diplomatic passport. Spain’s Interior Ministry has also confirmed that his security costs are covered by the state.

Avoiding the subject matter of the former king’s departure from Spain, Sánchez instead expressed his confidence in the role of the public institutions’ response to the challenge presented by the Covid-19 pandemic in the country: ‘The more adverse the situation, [and] the more extraordinarily complex the resulting situation of the sanitary emergency, [the] more important it is for the normal operation of the public institutions,’ he said.

‘The institutional architecture of our country has to provide solutions, which is what citizens expect from its public representatives. It has to offer a horizon of trust to all citizens, and it has to guarantee the necessary institutional stability to address the true challenges that our society has linked, especially, with the health, social and economic emergency derived from Covid-19,’ said Sánchez.

Juan Carlos I is under investigation by the Supreme Court for allegedly receiving commissions in exchange for interceding that a Spanish consortium won a contract to build a high-speed train link to the city of Mecca, in Saudi Arabia.

As the corruption-ridden legacy of king emeritus Juan Carlos I continues to haunt the Spanish monarchy, calls to strip the crown of its constitutional inviolability have grown louder.

Also in July, Barcelona Mayor Ada Colau called the Spanish monarchy ‘corrupt’ and called for a referendum to remove the monarchy and install a Republic.

Juan Carlos de Borbón is the grandson of Alfonso XIII, the last king of Spain before the abolition of the monarchy in 1931 and the subsequent declaration of the Second Spanish Republic.

Born in Rome on 5 January 1938, Juan Carlos was just 10 years old when he was put on a train to Spain. His father had agreed to have him educated under dictator Francisco Franco in the hope of one day seeing him sit on the throne himself.

Juan Carlos then spent 27 years under the shadow of Franco, growing up in a series of military academies. In May 1962 Juan Carlos married Sofia, a Greek princess.

With Franco’s blessing, the couple settled at the Zarzuela Palace near Madrid and had three children: Elena, Cristina and Felipe, who as male heir bypassed his elder sisters to the throne – and is now the present king of Spain, as Felipe VI.

Appointed by Franco as his political heir (who passed over Juan Carlos’s father, Juan de Borbon), Juan Carlos was long hailed for contributing to Spain’s transition to democracy following the dictator’s death in 1975. He took the throne within days after Franco died, in November 1975 – the first crowned head of state in 44 years, becoming Juan Carlos I.

A new system of a parliamentary monarchy was ushered in, and a new Spanish Constitution was passed by referendum in 1978.

Juan Carlos I was credited with helping to defuse an attempted coup in February 1981 by soldiers who stormed into the Spanish Congress building in Madrid, firing shots and holding MPs hostage for several hours.

The king’s appearance on television that same evening, urging support for the democratic government, was instrumental in blocking the attempt.

‘I knew the soldiers were going to agree because I had been named by Franco and was their commander-in-chief,’ he later remarked. He knew most of the officers from his own military training.

Despite the failed coup helping to endear him to the Spanish people, the king’s image suffered greatly in later years.

Whilst rumours of his numerous affairs were largely overlooked or unreported by the Spanish media for many years, his real decline started in 2012, after he accepted a luxury elephant-hunting trip to Botswana, paid for by a Saudi entrepreneur, during a very tough recession in Spain.

He was accompanied on the trip by his former German mistress, Corinna zu Sayn-Wittgenstein, which only came to light because he broke his right hip and was flown home for surgery. Juan Carlos I made a public apology as he emerged from hospital on crutches.

Between May 2010 and November 2013, he had surgery nine times, including two operations on his right hip and three on his left.

The 2012 incident in Botswana damaged the Spanish monarch’s reputation and is widely seen as the reason for his decision to abdicate in 2014 at the age of 76 in favour of his son Felipe VI. He then retired from public life in June 2019.

‘Faithful to the political desire of my father … I wanted to be king for all Spaniards,’ Juan Carlos said in his abdication address, recalling the day of his proclamation as king.

Now facing investigation in Spain and abroad for alleged corruption, he had become an embarrassment to the Spanish Monarchy and also the government.

Juan Carlos I might have helped Spain’s transition to democracy and he also foiled a military coup, but he heads into exile under a cloud of corruption that has now ruined his legacy.

ALSO READ (17/3/20): Financial affairs of former king will not be investigated by Spanish Congress